Selected Fortnite players have been invited to try out a new Spectator Mode for the game, as invitations are being sent for a special testing event in February 2019.

Fans of the battle royale will be delighted to hear that the feature is on the way, which Epic Games will hope to integrate for future competitive tournaments to make the viewing experience much more accessible.

In a screenshot of YouTuber BlueNightEdgar’s invitation, players are being courted to “test unreleased spectating tools and features” in numerous sessions in early February. 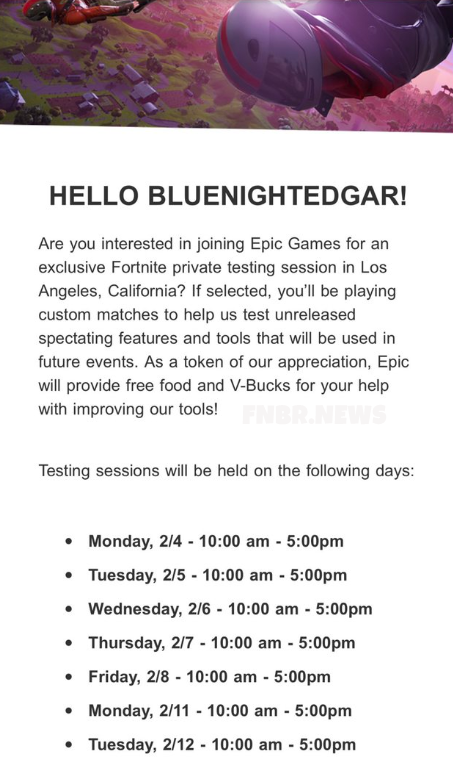 Leaked image of the invitations sent to Fortnite content creators.

The email says that invitees will be playing in custom matches that will be integrated with the features, while also offering V-Bucks and food for those participating.

The invitations sure go a long way to confirm a full-fledged Spectator Mode after many hints have have cropped up in multiple occasions. Fortnite events have seen the use of a new Observer Mode used in competitions such as the Fortnite Celebrity Pro-Am and the Winter Royale, among others, that gave viewers a completely new angle of monitoring players on the map.

Further, suspicious ghost buttons like “Join as a Player” have appeared throughout the game in the past that have made players wonder about an imminent feature.

The criteria for being an invited guest to the testing phase is unknown, but it’s strongly believed that an emphasis with Los Angeles Fortnite content creators are taking being targeted.

More information on the Spectator Mode should be released as the testing periods for the trial event takes place, and will be a feature many Fortnite fans will eagerly await.