Fortnite Season 6, Week 4 challenges and how to complete them - Dexerto
Fortnite

Fortnite Season 6, Week 4 challenges and how to complete them

Week 4 of Season 6 in Fortnite Battle Royale is here, and that means that the fourth set of weekly challenges have now officially gone live.

The first three weeks provided players with three free challenges and four that were exclusive to owners of the Season 6 Battle Pass, much like we saw throughout Season 5.

The official Week 4 challenges went live on October 18, and they look to be identical to the ones leaked by @lucas7yoshi_ on Twitter.

The official Season 6, Week 4 challenges can be viewed in the image below. 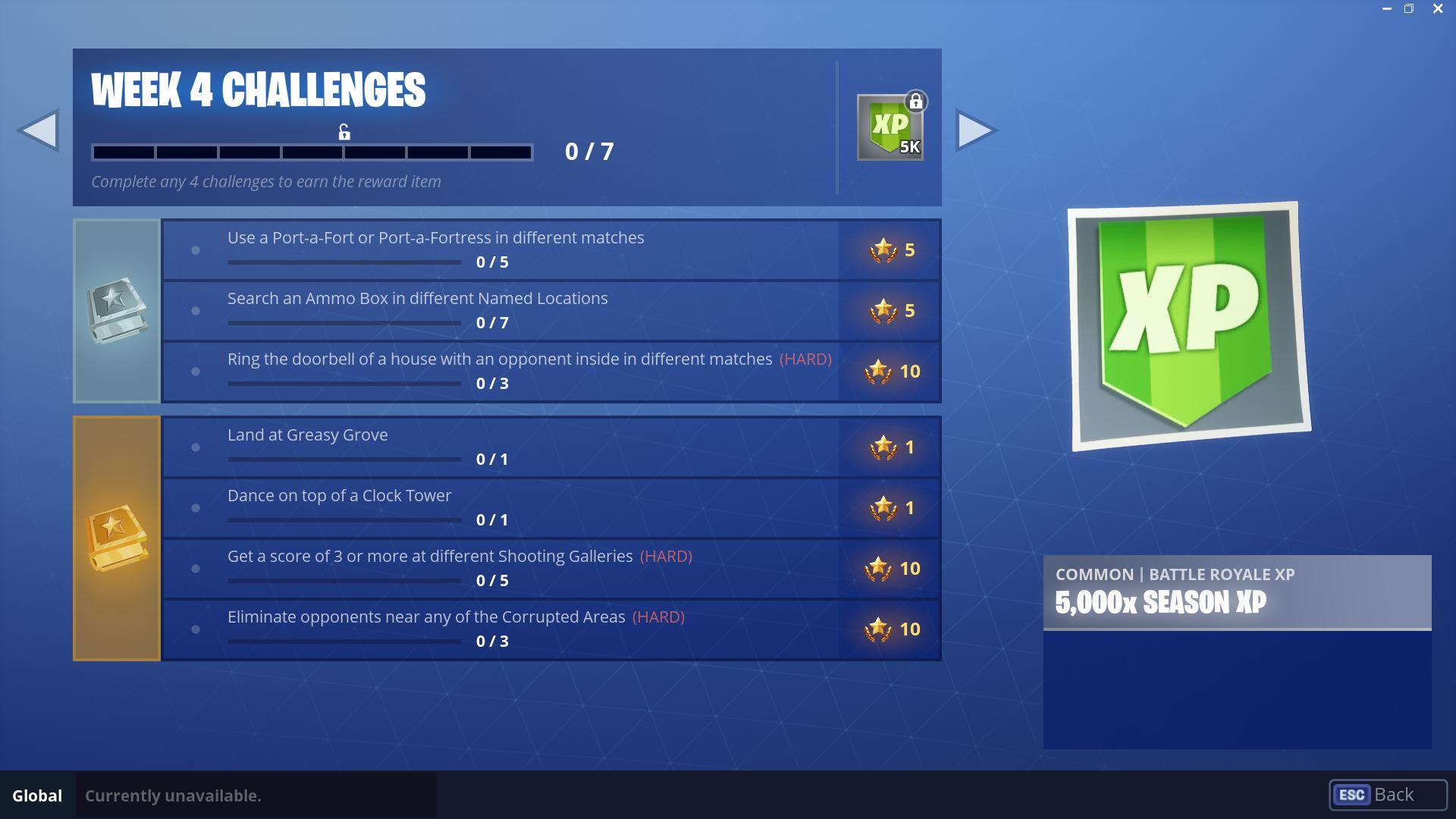 If you can’t view the image, the challenges are as follows:

The ongoing Hunting Party challenge returns for Week 4 of Season 6. This time there’s a secret Banner which can be found after completing all seven of the standard challenges. Check out our full guide on how to find it here.

Pretty simple – find a Port-a-Fort and use it (literally just throw it) five different times and you’ll earn yourself five battle stars!

Easily one of the most boring challenges we’ve seen this season, all you’ll need to do is search an ammo box in any point of interest that is named on the map (Pleasant Park, Tilted Towers etc.)

Every Doorbell location on the Fortnite map

This was a leaked challenge from Week 3 that never materialized. Ringing doorbells was never an option in Fortnite previously, but they’ve now started to appear around the map and you simply need to interact with them.

Your best bet is to head to a high traffic area with a lot of houses and wait for another player to enter one of the buildings with a doorbell. Remember you can only ring one doorbell per match, so you’ll need a minimum of three games to complete this one. Check out our full guide here.

For this challenge, all you’ll need to do is land at Greasy Grove in a game, followed by Wailing Woods, then Dusty Divot, then Pleasant Park, and finally Paradise Palms.

You can’t simply land, return to the lobby, and then start another game. Make sure you’re eliminated before leaving.

Stage 1: Dance on top of a Clock Tower

Another super simple task – begin by landing on the large clock in Tilted Towers and use one of your dance emotes.  Next, head to Lucky Landing and dance on the pink tree, and finally head to Flush Factory and dance on the giant toilet!

A map with all three locations marked can be seen below, courtesy of Fortnite Intel. 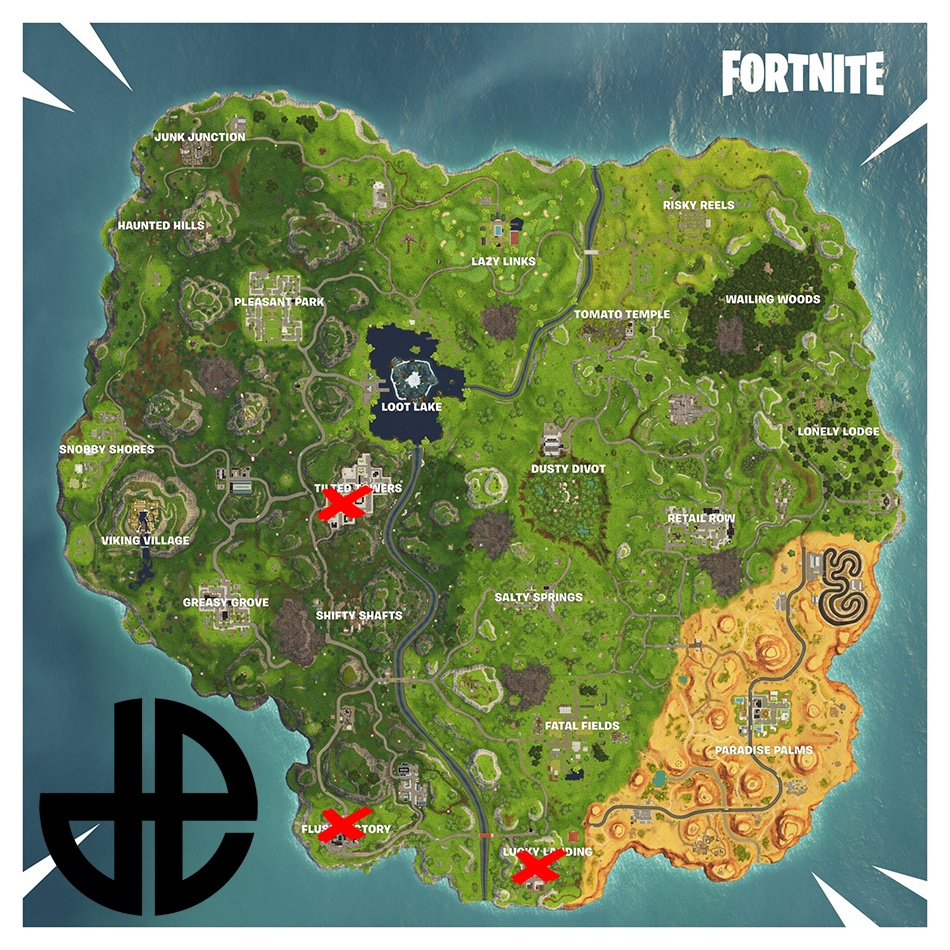 Get a score of 3 or more at different Shooting Galleries

For this challenge you’ll want to head to a shooting gallery and hit three targets, then move on to another one.

You’ll need to do this a total of five times, making this challenge more time consuming than it might initially appear.

You can check out our in-depth guide, along with a map showing all Shooting Gallery locations, here.

Eliminate opponents near any of the Corrupted Areas

This is another fairly straightforward task – simply head to any of the large purple runes left by the cube in Season 5 and attempt to fight other players.

You can almost guarantee that all of the corrupted areas will be extremely busy as everyone rushed to complete the challenges, so make sure you have some loot and materials before you arrive. 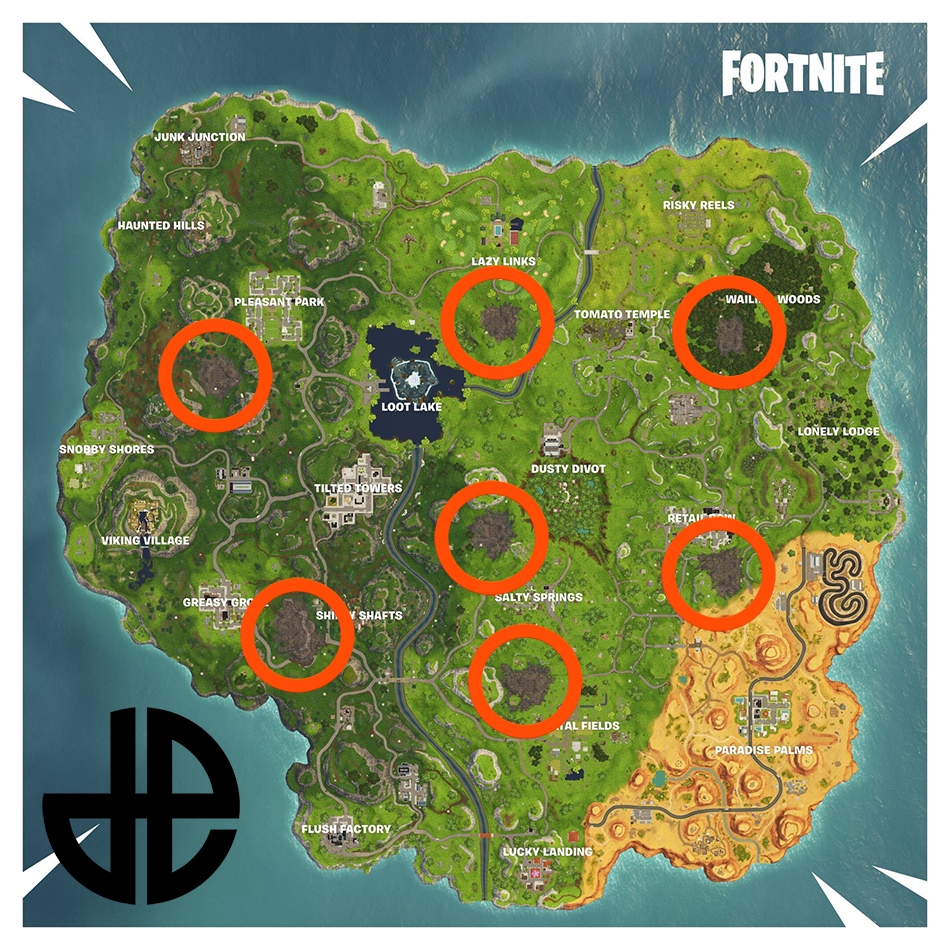