Fortnite challenges for Week 4 of Season 6 have been leaked

Leakers have revealed what appears to be the full list of upcoming Battle Pass challenges for Week 4 of Season 6 in Fortnite Battle Royale.

While Fortnite’s map has gone through massive changes with the appearance of Cube Island floating in the sky above the map, the early leak of the upcoming week’s challenges is something that hasn’t been altered.

In Week 4, players will need to team up to complete some of the challenges, and will also need to practise their driving as they take on time trials that are dotted around the map.

Due to this information being leaked, it’s possible that these won’t be the official challenges that we see when they go live. Epic Games have changed challenges just before their launch before, and could do again before this set goes live, expected to be on Thursday, October 18.

You can find the list of Week 4 challenges below, courtesy of @CrossLeaks. 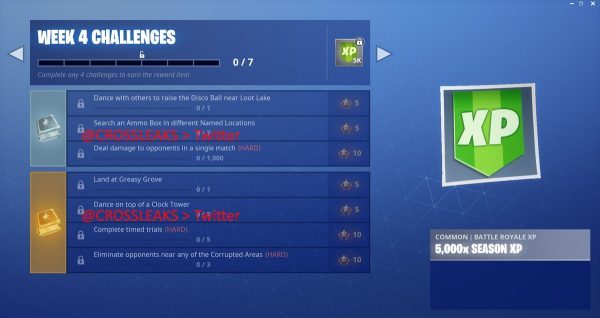 If you’re having any problems completing this week’s challenges, keep an eye out for our weekly challenge guide which will be available once the challenges officially go live.