Fortnite players knew they were in for headaches when Epic Games announced that the Ice Legion would infest the battle royale, but there might be a bug that makes dealing with the undead much less demanding.

Fortnite’s Ice Storm Event brought along with it the Ice Legion, which are a reskin of the Cube Monsters first seen in the Fortnitemares event. But some players haven’t taken too kindly to the PvE element being reintroduced to the game, so a bug that stops the worst of the Legion in its tracks might be a welcomed one.

In a post, Reddit user hippy713 got a bit intuitive after being rushed by a Golden Ice Brute and its crooneys by placing a trap underneath the behemoth that seemed to make him stay in place.

After the trap had engaged the Brute, it seemed to have clipped the monster’s body to the trap, rendering it completely motionless while being repeatedly attacked from the spikes below it.

With the mini-boss incapacitated, the user was then able to clear the small horde of Ice Fiends as they spawned from the Ice Spike nearby.

The player was even able to completely destroy the Ice Spike from a great distance, while the Golden Ice Brute still seemed to be bugged on the placed trap. 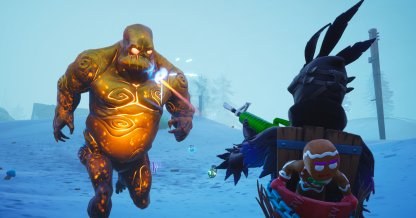 A bug like this would be great if a player has a Golden Ice Brutes charging at them.

Although the bug seems to be incredibly useful for managing the worst that the Legion has to offer, some players have said that the bug didn’t work for them, while others said it happened to them too.

Even though Epic Games tends to iron out bugs in its game, this glitch might be one that players wouldn’t mind getting ignored.