In a surprising turn of events, the Korea Times has reported that PUBG, a subsidiary of the Korean publisher Bluehole, has filed a lawsuit against Epic Games Korea.

The report states that PUBG Corp is asking the Seoul Central District Court to determine whether or not Fortnite Battle Royale is a copy of PlayerUnkown’s Battlegrounds.

Released in July of 2017, Fortnite originally came with just the stand alone “Save the World” mode but Fortnite Battle Royale, Epic Games’ take on the genre, soon followed and became the most popular version of the game.

PUBG Corp has been relatively hostile towards other battle royale games from the outset, with creator Brendan Greene saying he hopes not to see a “carbon copy” during a Reddit AMA and Bluehole making it clear that it had a number of concerns about Fortnite back in September of 2017.

However, Bluehole and PUBG Corp did not invent the battle royale genre and community members have pointed out the potential hypocrisy of such statements when PlayerUnknown’s Battlegrounds is so similar to earlier battle royale games like H1Z1 or DayZ. 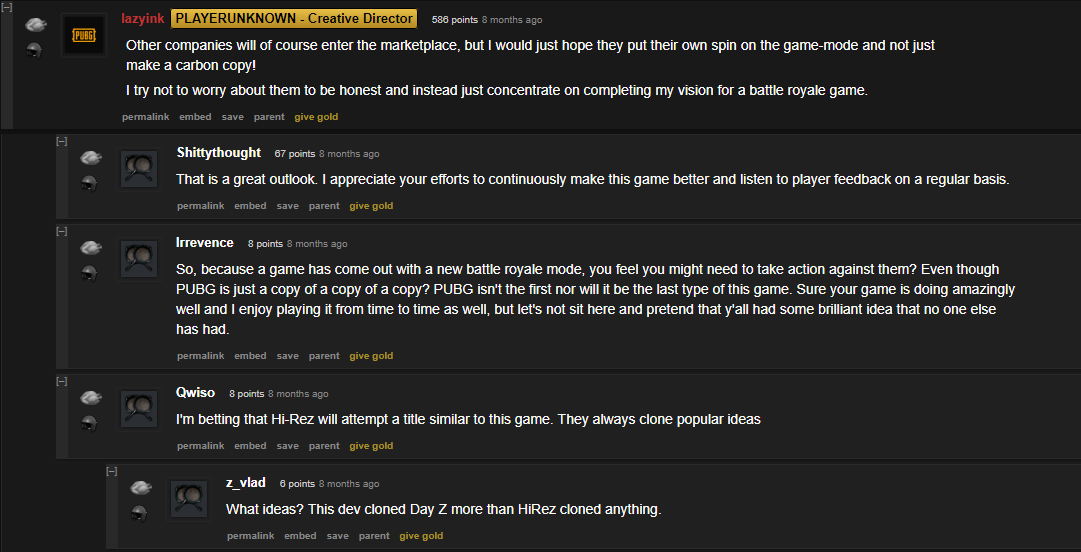 The news has been met with surprise from the community as, other than the fact that they are both Battle Royale titles, Fortnite Battle Royale and PUBG are different in a number of key ways ranging all the way from graphics to Fortnite’s innovative building mechanics.

However, the issue that Bluehole has seems to come more down to the fact that Epic Games is the company that developed Fortnite when it also owns and uses the same engine that PUBG uses, Unreal Engine 4.

Bluehole also expressed annoyance with Epic Games for using PUBG to promote Fortnite Battle Royale when it was first released, with one official telling PCGAMER in September that the concern “is not about the battle royale game mode”:

“our name was used to officially promote their game without our knowledge. There was no discussion. It was just a bit surprising and disappointing to see our business partner using our name officially to promote the game mode that is pretty similar to us and there was misunderstanding in the community that we’re officially involved in the project.”

The news about the lawsuit has not gone down well with the Fortnite or PUBG communities, with one post denouncing PUBG Corp’s decision making it to the top of the /r/PUBATTLEGROUNDS subreddit.

Further details about lawsuit, like when it will make it to court, are currently unknown. However, this could have a negative impact on Epic Games’ plans to break into the Korean market by releasing Fortnite in pc-rooms across the country in partnership with Neowiz Games.