Epic Games, developers of the massively popular Fortnite Battle Royale, have confirmed that they are working on a 1v1 practice mode and have teased that “big” things are coming to Creative.

Will there be a 1v1 mode added to Fortnite Battle Royale?

Initial interest regarding a 1v1 mode was piqued in late March 2019, when an Epic employee, Reddit user ‘darkveil’, replied to a question on an ‘ask me anything’ regarding the Creative mode in the game.

In response to the question, which regarded the potential of a 1v1 mode in Fortnite Battle Royale, the Epic Games staff member said that they were “planning to add ‘Duel’ mode support for 1v1, winner stays on.” 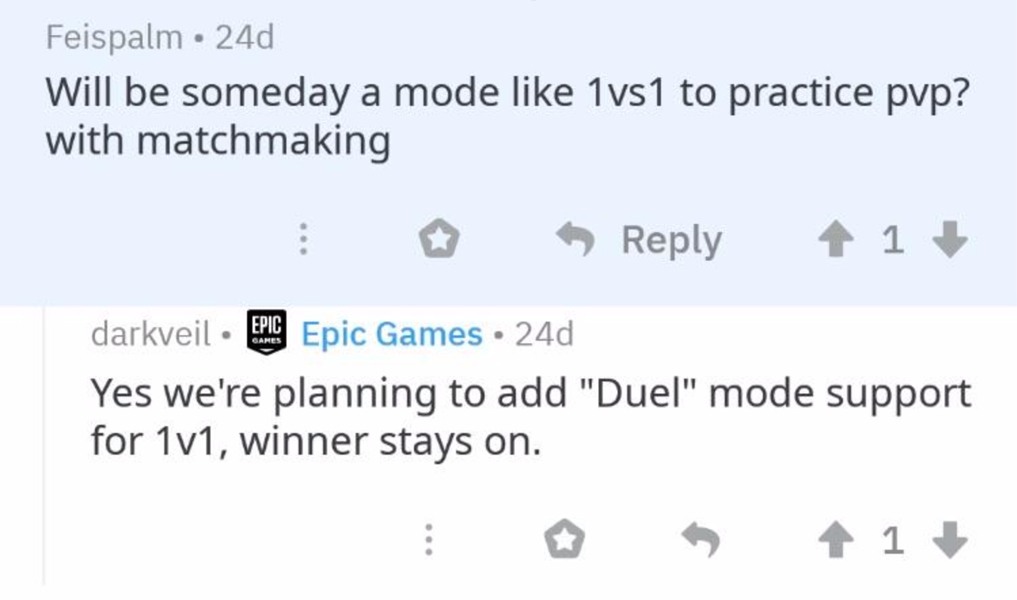 When will Fortnite Battle Royale’s “Duel” mode be added?

A lot of large games have incorporated 1v1 modes of late. For example 2017’s Call of Duty: WWII had a specific 1v1 arena built into the headquarters social space, harking back to Modern Warfare’s inclusion of ‘Cage Matches’. Given Fortnite’s unique building aspect and the extra skill level this brings, there have long been calls to incorporate a 1v1 mode.

“The Duel feature is still a little ways out,” explains darkveil, “but a big piece of tech needed is coming in the next Creative update — we’ve added support for games to have multiple “rounds” and scoring/victory handling for that.”

Judging by the response, it seems like there will be a large Creative update coming soon, with the 1v1 Duel mode following at some point after.

At the time of writing, there are roughly two weeks of Season 8 left, meaning that Duel mode will probably be added with the start of Season 9, or someway through that season.

Reddit users were understandably excited, with one saying “Can I kiss you?” whilst another simply went for “flair this man”.