Epic Games, developers behind the massively popular Fortnite Battle Royale, may finally be about to respond the community backlash that has surrounded their game for the past month, at least if a Reddit reply is anything to go by.

Why have people been critical of Epic Games?

The game developer has received criticism recently for a number of different reasons. A lot of it can be traced back to the v8.20 update, which was introduced on March 27. This update reversed a number of popular changes from Season 7, including a bonus 50HP granted on elimination, a minimum of 50 of each material dropped on elimination, and an increased farming rate of 40%.

On top of this, Epic Games’ reluctance to add a FOV [Field of View] slider has received condemnation, as well as their decision to remove the possibility of playing on stretched resolution. 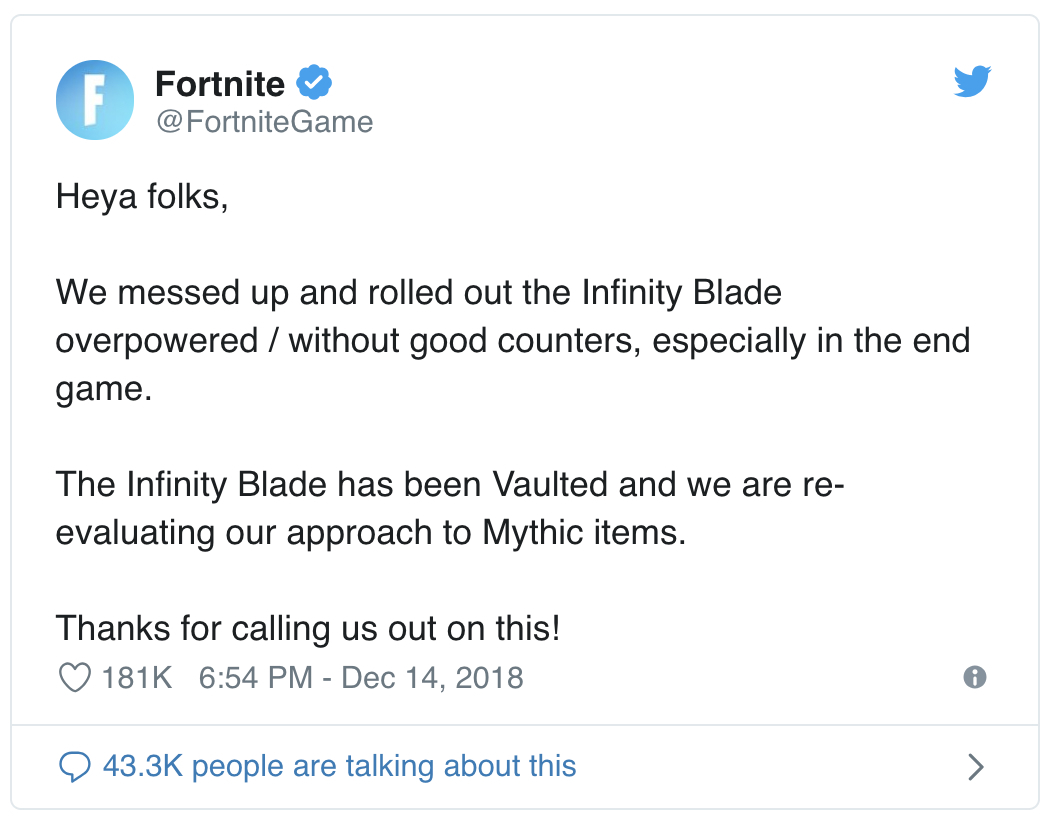 The silence from Epic Games contrasts to their previous behaviour, where they admitted their mistake of implementing the Infinity Blade.
600[ad name=”article2″]

Many members of the community have been quick to lament Epic’s silence, contrasting it to the failed implementation of the ‘Infinity Blade’ into base game modes of Fortnite, when Epic quickly responded and apologized. Now, though, a response from an Epic Games engineer suggests they are about to finally respond to the backlash.

On April 20, Reddit user ‘Rhymne’ posted a screenshot of their response to Epic Games’ April Survey, showing that they had answered with ‘strongly disagree’ to the statement ‘Epic Games listens to feedback from players’.

This prompted the vice president of Engineering at Epic Games, Dan Vogel, to reply, stating: “General feedback and sentiment is not lost on us – we should have communicated intent, motivation, and reasoning behind various changes to allow proper dialog.”

The response concludes by saying that they [Epic Games] “plan on changing our approach to communication next week.” As a result of this, it looks highly likely that Epic’s silence will finally end soon.

However, some Reddit users were sceptical of this comment, worried that a response to justify the unpopular changes will not necessarily lead to changes in game, but will just cause more community unrest as Epic cements their position.