With the Fortnite Battle Royale community waiting in anticipation for the ‘Unvaulting’ event to kick off, its actual date and time has now been confirmed by Epic Games.

A lot has been happening at Fortnite’s Loot Lake point of interest as we approach the latter stages of Season 8 and the game’s developer has now confirmed that May 4 will be the event’s start date in a Twitter post, at that it will be starting at 3PM (EST).

While changes have been a constant in what was first dubbed a ‘rune’ event by fans, there’s been very little in terms of official announcements about what’s been going on at the location.

First of all, there were runes appearing across the map and landing at a newly dug out vault where the lake once was, but now a huge timer has appeared there, leaving fans questioning just what’s going to happen next.

Beneath the gateway, light breaks through. https://t.co/UuvLpkyVea

Although it hasn’t officially been confirmed by Epic Games, speculation suggests that an event set to take place in Fortnite BR that will give players the chance to vote for an item or weapon to be returned from the vault.

Considering that there are still so many popular items stowed away in the vault, this event has stirred up a lot of excitement among the player-base. With so much information about this event already having been leaked, data-miners have now found and released the actual date and time that Unvaulting will take place.

According to prominent data-miner @ShiinaBR, the event will take place on Saturday, May 4, kicking off at exactly 12 PM PT / 3 PM ET / 8 PM BST. 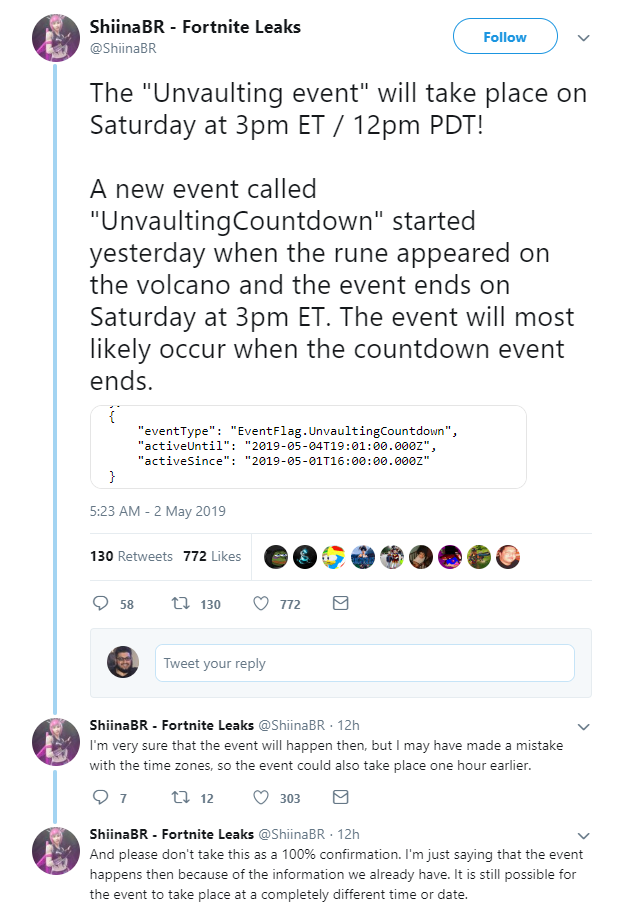 Keep in mind, since the actual date and time hasn’t been officially announced, there’s no way to know how accurate this leak is.

However, judging by the fact that most major previous in-game events have taken place on Saturday afternoons in the US, the leaked date and time seem to make sense.

According to leaks and speculation, once Unvaulting kicks off, player will be able to go into the currently sealed bunker in Loot Lake and vote for a certain weapon or item they want to be brought back from the vault.

That being said, there are still major questions about the whole process, such as how the voting will be done, how long players will have to vote, and at what point will the winning weapon or item be added back into the game. 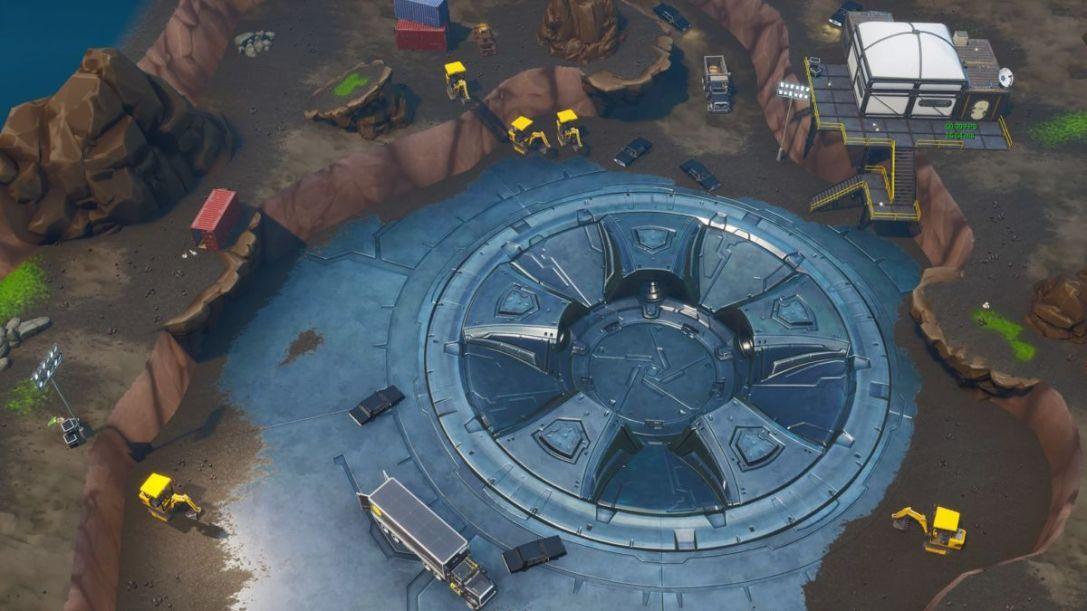 It’s believed that during the Unvaulting event, the doors of this bunker will open and allow players to go inside.

Which items/weapons will players be able to vote for?

In the weeks leading up to the event, data-miners dug up game files which suggested that there would be six items and weapons that players can vote to bring back from the vault.

The bunker in Loot Lake seems to have confirmed these leaks, as all six monitors located inside feature one of the six item. 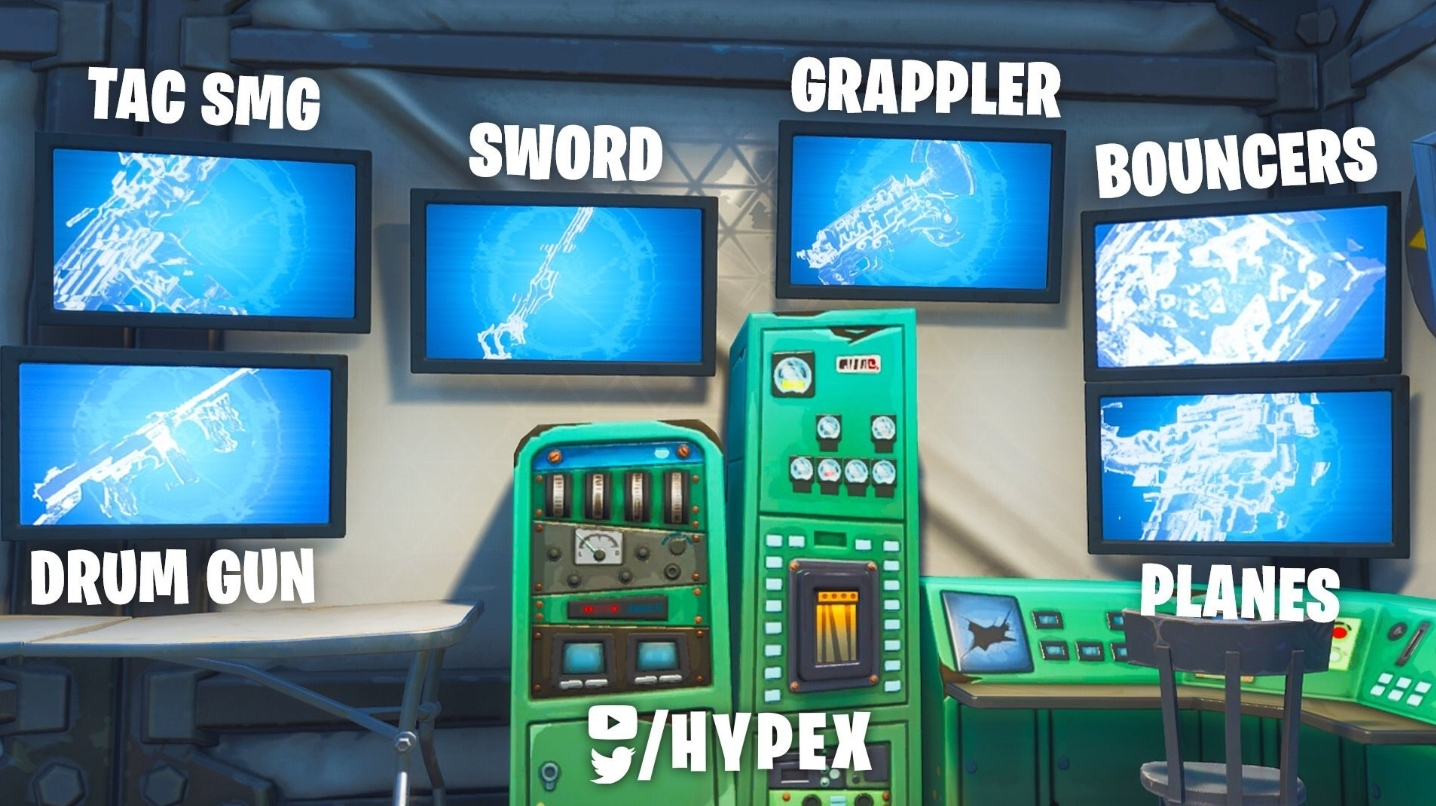 All six monitors inside the Loot Lake bunker feature one of the weapons or items that will be included in the voting.

While no one will know exactly which item or weapon will be brought back from the vault, the general consensus on social media is that either the Drum Gun or Bouncers will win, and that neither the X-4 Stormwing or Infinity Blade are likely to come close.

That being said, we will all just have to wait and see. Until then, make sure to be playing at 12 PM PT / 3 PM ET on May 4 so that you can get your vote in.