Cloak and 72hrs respond after Tfue claims they lost him $140,000 - Dexerto
Fortnite

Professional Fortnite players Dennis ‘Cloak’ Lepore and Thomas ‘72hrs’ Mulligan have responded after Turner ‘Tfue’ Tenney accused the pair of costing him a $140,000, because he turned down a Madden 20 sponsor deal.

Late on September 7, news emerged that Tfue has had something of a falling out with his trio partners 72hrs and Cloak. Tenney tweeted that he was looking for a new trio “who take competitive seriously.”

He explained that he turned down $140,000 from EA to stream Madden 20, refusing the offer in order to play in the Fortnite Trios tournament, alongside Cloak and 72hrs. However, he was not aware that both his trio teammates had accepted the money to play Madden, leaving him with no playing partners, and $140,000 out of pocket. 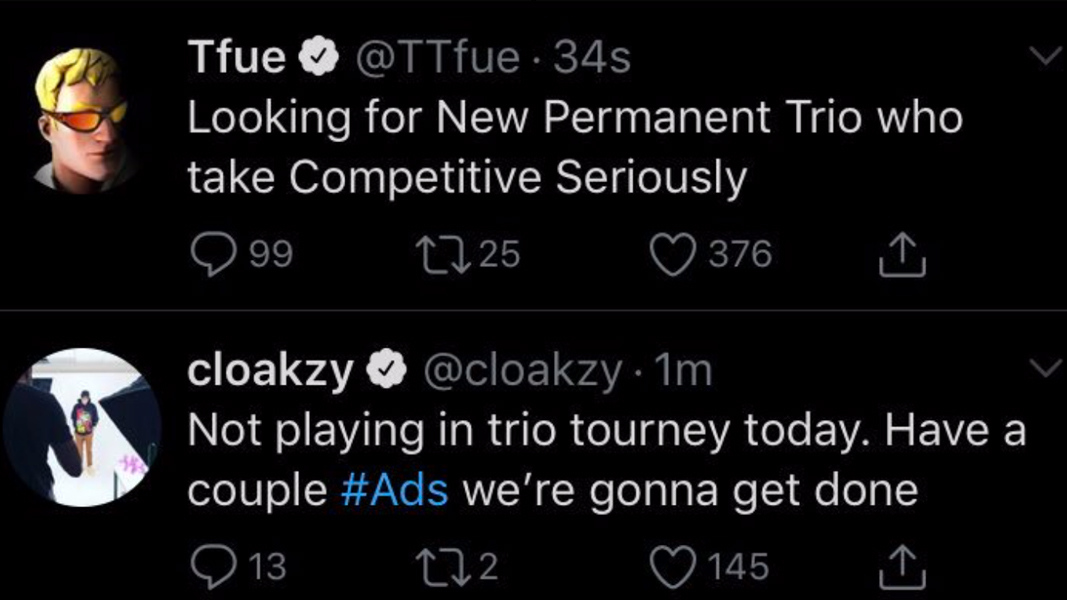 The conflict became clear with a number of tweets from the trio.
[ad name=”article2″]

Tfue has also stated that his trio would have to reimburse him the money he missed out on for him to return to playing with them. Now, on September 8, Cloak and 72hrs have responded to try and explain their side of the conflict.

“If he gets offered a bunch of money to play Madden,” started 72hrs. “Why wouldn’t he come to us and be like “yo, I have this deal, should I do it?” And then we’d be like ‘sure that’s a lot of money, go for it dude,’ and then we get offered the money too.”

Mulligan also explained that he wasn’t aware Cloakzy had been made an offer to play Madden, but it would have worked out nicely had all three members accepted their offers from EA.

“I even was willing to cancel the deal – which is bad for relations with people – in order to go play the tournament, if he [Tfue] was that upset over it,” finished Mulligan.

Similarly, Cloak had little sympathy for his longtime duo, explaining that a lack of communication that caused the disagreement.

Cloak’s argument is that it was entirely Tfue’s decision to turn down the money to play Madden and, had he discussed it with them, the issue would not have arisen.

“What kind of idiot are you to decline $140K?” finished Cloak. “That’s not my fault you’re a dumbass.”

Cloak clearly doesn’t seem too bothered about the falling out, even criticizing Tenney for turning down such a lucrative offer.

While both players have now responded to Tfue’s allegations, it seems unlikely that we’ve heard the end of this, particularly given the strength of criticism from Cloak to his longtime friend and duo partner.

We will continue to update you on this story.