You might know BlocBoy JB from his 2017 song dubbed ‘Shoot,’ which birthed the incredibly popular dance of the same title.

The dance has since been used in a variety of media, one of which is Epic Games’ popular battle royale game, Fortnite.

In the game, players can use a variety of emotes, which are character-specific actions such as dances. One of these emotes has been titled ‘Hype,’ and takes its inspiration from BlocBoy’s ‘Shoot’ dance.

BlocBoy took notice of this and went to twitter to express his concerns over the matter.

BlocBoy followed up his tweet with another comment that suggested the developers’ lack of credit stemmed from racial prejudice.

“Dey Love Our Culture But Hate Our Color”

This isn’t the first time Epic Games has been called out for using popular dances, either. Chance the Rapper similarly took aim at the developers in July 2018, stating that they should share the game’s revenue with the artists who inspired the dances in question.

“Fortnite should put the actual rap songs behind the dances that make so much money as Emotes. Black creatives created and popularized these dances but never monetized them. Imagine the money people are spending on these Emotes being shared with the artists that made them.” 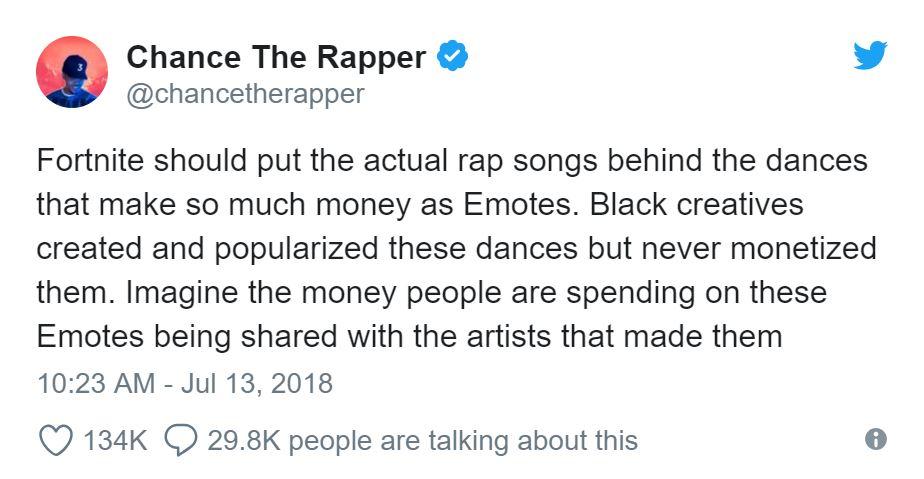 Other emotes taken from popular dances include “Fresh,” inspired by Carlton’s iconic moves from The Fresh Prince of Bel-Air, “Dance Moves,” which uses Turk’s dance from the TV series Scrubs, and “Floss,” popularized by the “BackPack Kid.”