The Duos half of the $30 million Fortnite World Cup has come to a close on July 27, with Cooler Esport’s Nyhrox and Aqua clinching first place and taking home a whopping $3 million.

After five weeks of grueling qualifiers, the duos that managed to qualify for the World Cup Finals gathered at the iconic Arthur Ashe Stadium in New York City to battle out for a share of the $15 million prize pool.

Aqua and Nyhrox finished on top with 51 points, followed by Lazarus Esports’ Rojo and Wolfiez in second place with 47 points, and the top-three was rounded off by 100 Thieves’ Elevate and Ceice, who finished with 45 points.

The format of the competition was simple – there were six total matches played, with the duos earning points each round based on both eliminations and placement.

Below, you can find recaps and highlights for each of the six games, as well as the final placements and the amount of prize money that each duo won. 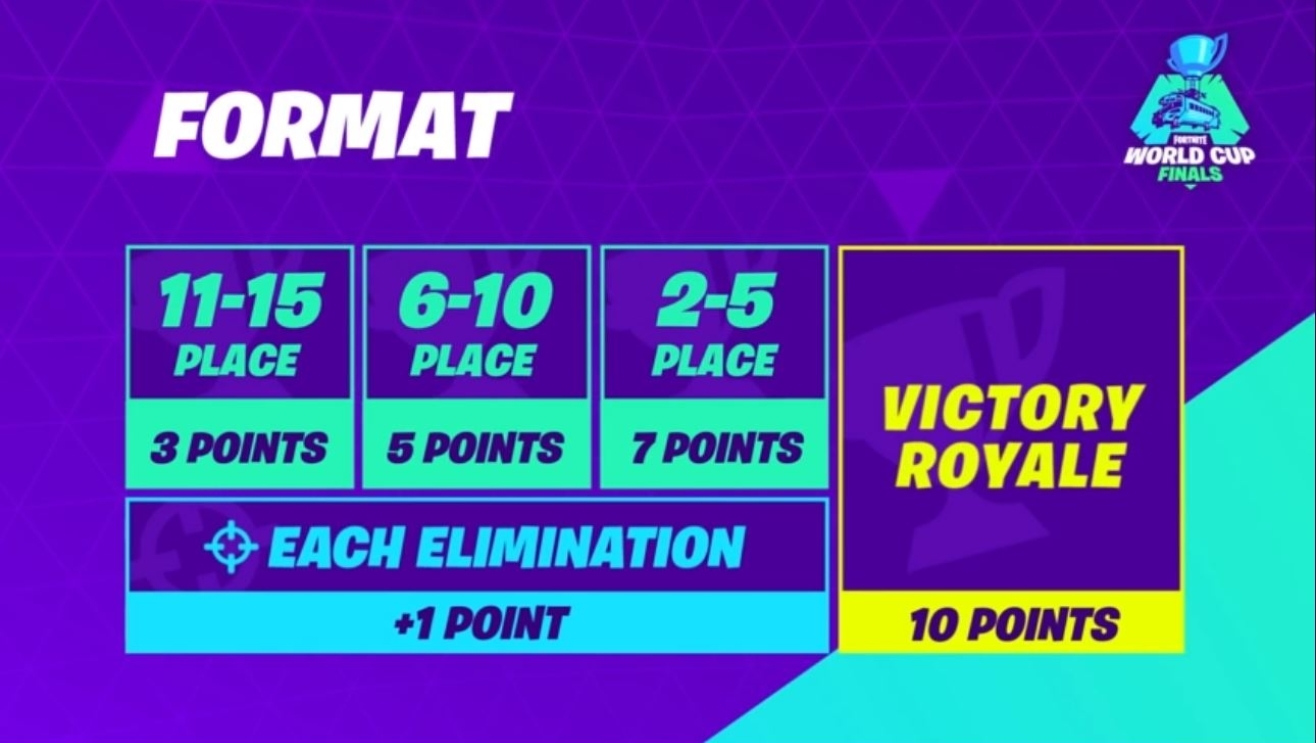 Format and scoring for the Duos half of the Fortnite World Cup.
[ad name=”article3″]

Coming into the event, NRG Esports’ Zayt and Ghost Gaming’s Saf were considered to be among the favorites to win the Duos tournament, and they started their run with a bang.

Five eliminations and a Victory Royale in game one gave the powerhouse pair a 15 point haul to start things off.

Game one of the Duo #FortniteWorldCup is won by the North American team of @zayt and @GhostSaf who manage to hold high ground late on into the game and utilize it perfectly to both stay up and complete a 5 elimination Victory Royale!

The second match saw TSM’s Vinny and Zexrow grab the Victory Royale and seven eliminations, adding 17 points to their tally for the tournament and pushing them up to third place.

First place was still controlled by Saf and Zayt, followed by FaZe Clan’s Megga and Dubs, who finished fourth and 10th over the first two matches,

Game 2 is won by @TSM_ZexRow and @TSM_Vinny1x who manage to secure a 7 elimination Victory Royale and the second #FortniteWorldCup win so far for the NA East region.

Match three saw one of the lesser talked about duos in compLexity Gaming’s Machwood and free agent Calculator take the surprising Victory Royale, along with a whopping nine eliminations between them.

The 19 point haul was good enough to propel them all the way to sixth, with the duos of Saf/Zayt, Megga/Dubs, and Zexrow/Vinny still in firm control of the top three.

What an ending! The Game 3 Victory Royale goes to @coL_MackWood and @calcGG who managed to rotate on high ground throughout every late circle before finishing with their 9th kill to win the game.

Game 4 – Things start to get interesting

The fourth match saw the eventual champions Nyhrox and Aqua enter the spotlight for the first time, as they took the Victory Royale to become the first European-based duo to finish a game as the last ones standing.

While the top-three spots remained unchanged from the previous match, the powerhouse duo of Mongraal and Mitr0 crept into the fourth spot for the first time.

Game 4 is won by @nyhrox and @aquaa as we see our first EU duo with a Victory Royale! Once again the high ground proves so vital in securing that top spot.

Fresh off their win in game four, Nyhrox and Aqua grabbed a second straight Victory Royale in game five, to go along with their seven eliminations for a total of 17 points.

The back-to-back 17 point showings saw the EU duo push all the way to second place going into the final match, just three points behind the first-place combo of Saf and Zayt.

IT'S BACK TO BACK! @nyhrox and @aquaa manage to dominate the high ground in the final circles once again! A 17 point game puts them right into contention for the #FortniteWorldCup

Game 6 – Another win for Cooler Esports

In a dominant second half that not many would have predicted, the European organization Cooler Esport claimed victory in the final three matches of the Duo competition.

This time, it was the pair of 4zr and Noward that took the Victory Royale, to go along with their three eliminations. With so many of the top players going down early in this match, Nyhrox and Aqua did just enough to clinch the tournament victory.

The final Duo game of the #FortniteWorldCup goes to @oh4zr and @NowardBE who make it 3/6 games won by 'Cooler' players. 4zr managed to rotate up the mountain first and hold off any competition.

Don't miss any of the action this weekend: https://t.co/MuOsVmQfx4 pic.twitter.com/NQWjhocgeP

With the six matches done and dusted, here are the final placements for the $15 million Duos tournament at the Fortnite World Cup finals, including the share of the prize pool that each pair of players received. 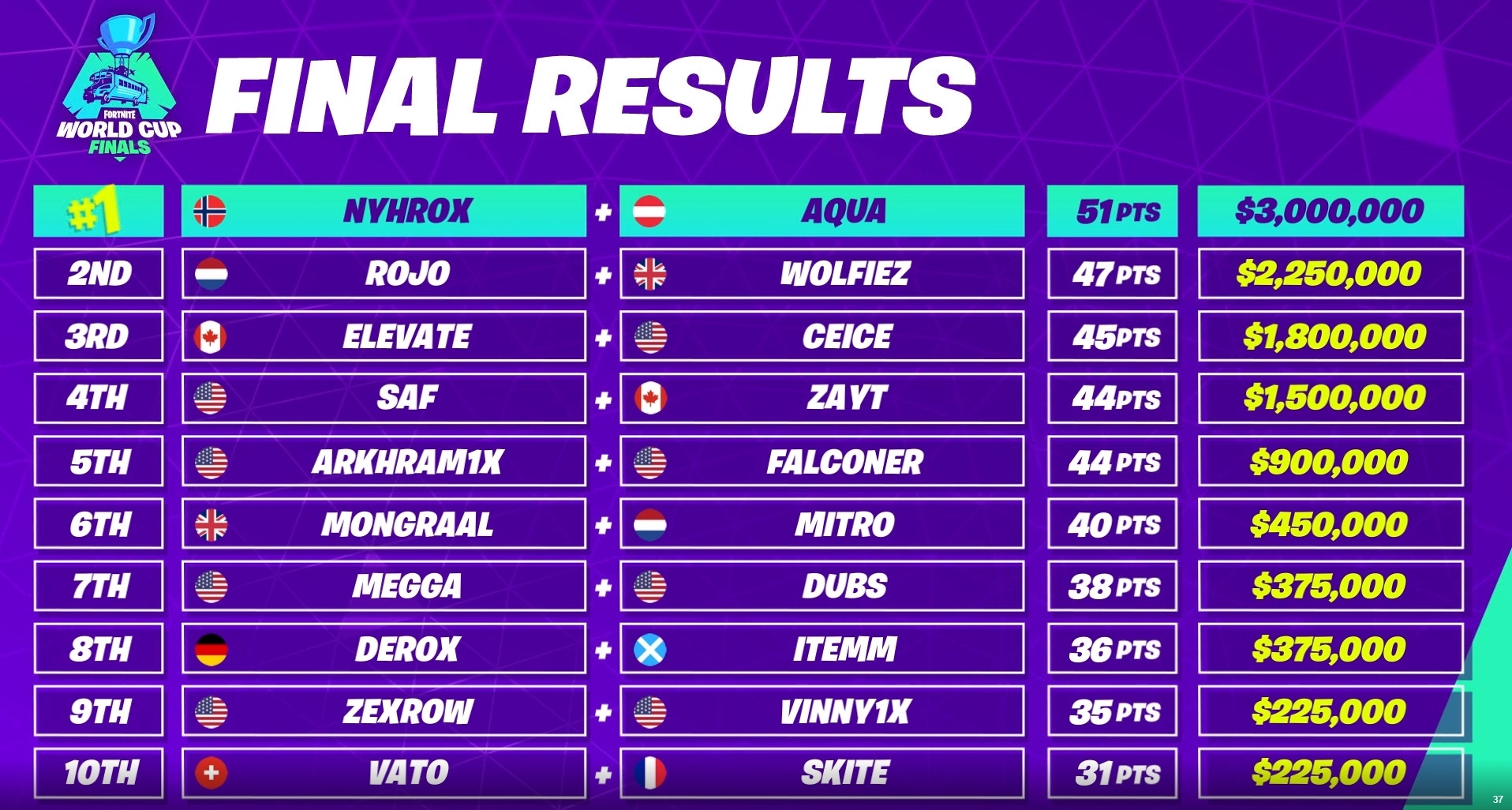 Final standings of the top-10 from the Fortnite World Cup Duos tournament.

Remember, the Duos tournament was not the only competition held at the World Cup, with there also being the Creative Finals and the Celebrity Pro-Am, recaps for which can be found in the links