Another Fortnite skin has been leaked following the V6.20 update - Dexerto
Fortnite

Another Fortnite skin has been leaked following the V6.20 update

Data miners have struck once again as yet another Fortnite skin has been dug up ahead of its official release into the game.

As is the case with every major Fortnite update, a long list of skins and other cosmetic items were leaked when the V6.20 update dropped on October 24.

It looks like those skins aren’t all that Fortnite fans have to look forward to, though, as one more skin has been discovered in the game files by Blackopbeast34.

The skin, called ‘Bunnymoon,’ was originally found in Wednesday’s update, but only the name was discovered at the time.

Thanks to Blackopbeast34, however, we’ve now got the skin in its full glory, bunny ears and all.

Who are you supposed to be again? 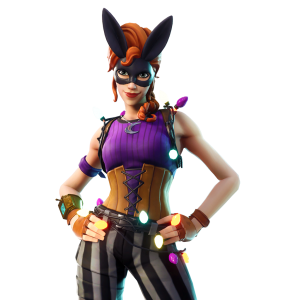 The skin looks to follow in line with the Halloween theme of the previously leaked skins that were found earlier this week.

While there’s no word on when this Uncommon Skin will be hitting Fortnite’s Item Shop, fans are anticipating that it could show up in the Shop as soon as October 26 which would be just in time for Halloween.

As always, there’s no official confirmation from Epic Games on whether these leaks are real, but the items are expected to show up in the Shop at some point.

While you wait for the skin to finally pop up in the store, you can get a head start on this week’s challenge with the full guide here.