A Portal has been Spotted in Fortnite's Tomato Town - Dexerto
Fortnite

A Portal has been Spotted in Fortnite’s Tomato Town

A new portal has appeared in Tomato Town and may signal a change to the Fortnite map.

The portal was spotted by YouTuber Ali-A.

The Fortnite map has undergone a significant amount of changes due to portals in the lead up to Season 5, but it has remained quiet ever since.

This new one was found where the tomato head was in Tomato Town, leading to speculation that the tomato is on its way back. 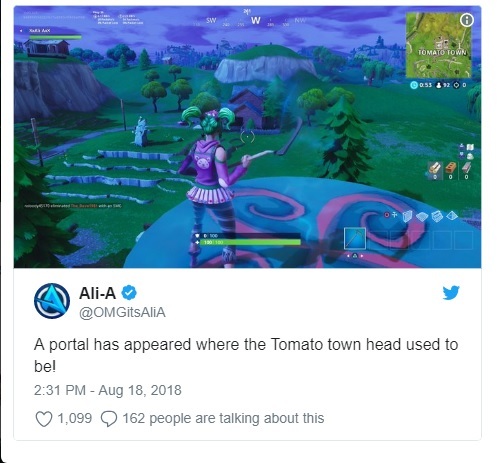 The tomato head is a fan favorite, and appeared as a skin as part of the Pizza Pit customization pack.

The Durr Burger disappeared from the game and reappeared in a real-life California desert to set off speculation on what would happen to the map.

Portals brought in a wagon, a skeleton and an anchor when they previously appeared.

They mostly turned into rifts once Season 5 began and allowed for faster traveling around the map.

However, a game breaking glitch was discovered involving the rifts, causing them to be disabled by Epic Games.

Season 5 of Fortnite is in full swing and the challenges for Week 7 have been released.

The tomato head is not the only fan-favorite item making its appearance, the new Galaxy skin will be in the item shop soon.