A bombshell accusation has quaked the competitive Fortnite Battle Royale community as a well-known pro player has been accused of cheating to qualify for the World Cup.

April 27-28 marked the third of ten weekends of qualifiers for the World Cup, as many around the world tried to add their names to the list of 100 players who will be stamping their ticket to the massive Solos tournament in July.

One of the players who did qualify from the North American East region was Damion ‘XXiF’ C., a pro player who represents the Rise Nation esports organization.

On April 29, a Fortnite BR pro ‘HighSky’ posted a video on Twitter in which he accused XXiF of teaming with other players during the qualifier to gain easy elimination points.

The video, which was a replay of one of the NA East qualifier matches, showed XXiF eliminating two players right at the start of the match, which many are questioning the legitimacy of.

Essentially, what has many within the community suspicious, is the easy manner with which XXiF eliminated the other two players, one of which is reportedly known to be a friend of his.

As the video shows, the two appear to not have put much of a fight against XXiF, and their decision-making in the sequence was questionable at best, despite the fact that their qualification point totals suggest that they themselves are decent players. 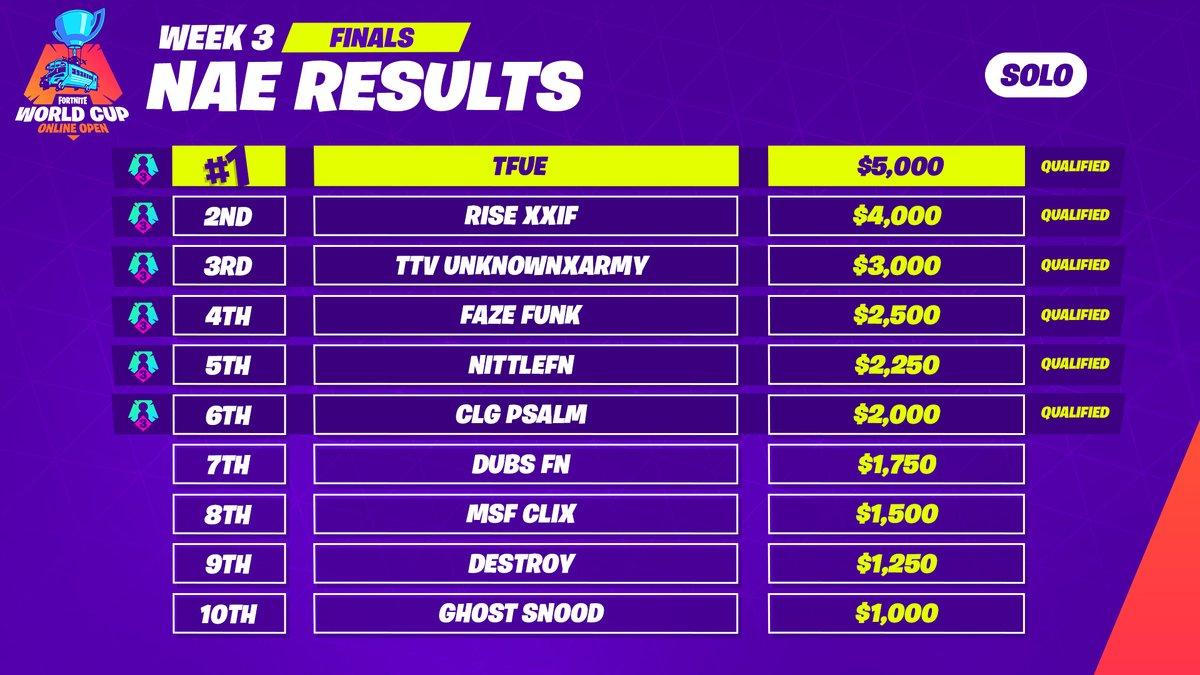 XXiF finished second in the week three World Cup qualifier for NA East, earning $4,000 and a spot in the World Cup.

As expected, the video accusing XXiF if cheating has gone viral on social media, with some of the biggest names of the competitive community sharing their reactions to what they had seen.

We have compiled some of the best Twitter reactions below, including from NICKMERCS, Ceice, Vivid, Bizzle, and others.

What a fuckin’ joke…

Theres blatant proof of them feeding him kills now, & there has been proof of all them doing this in the share the love event too..

If these guys don't get perm-banned ima be hella dissapointed @FortniteGame
person that barely missed out on WC invite deserves this 100%.

this is so sad

Now that the accusation has formally and publicly been made, it’s up to Epic Games to analyze XXiF’s gameplay from the qualifier and decide whether there is enough evidence to determine that he had indeed been cheating.

Epic have already revealed that they have their own algorithm that helps catch players who are teaming, so that should definitely play a role in this decision.

If XXiF is found to have been cheating, then his Fortnite BR account will be banned and he will be forced to give both the $4,000 prize money he won and the qualification to the World Cup.

In that scenario, competitive player ‘Clix’ will be next in line for qualification. Although Clix finished eight in the tournament, the seventh place player ‘DubsFN’ had already qualified during another weekend.

With so much at stake in these World Cup qualifiers, the threat of players cheating their way through is always increased.

A day after all of the accusations had been publicly leveled against him, XXiF posted an official response in his Twitter page, denying all of the claims that he had been teaming with players to earn points.

He did go as far as acknowledge that he was familiar with the two players he was accused to have been teaming with, but called the allegations false.

This is my response to the false allegations of me cheating during World Cup.

Yes I know who Bad and Wuji is, but I also know half the people playing in the qualifiers. I’m bound to run into people that I know or have played against before. I had no idea he was going to land there and have no control over where he chooses to land, but in 1 out of the 10 games I played he chose to land in the same spot as me. “According to the video provided by HighSky, Wuji didn’t see the pump, went for the dualies and got into my LOS. He then tries for the pump but due to a looting/pickup bug, he probably failed to grab the gun and I was able to finish the kill. I can’t speak for the second guy, as I would never land on two people fighting – it’s something I can’t comprehend or put reason/meaning to”.
And for people saying Gestyy is my friend or that I’m good friends with him, I’m not. Whatever Gestyy did during the world cup qualifiers and his actions have nothing to do with me. He is a 14 year old who has seen me play at Toronto lans. I’m 22 years old. Gestyy landing on me is as good as any fan landing on their favorite streamer or pro player.

As of now, Rise Nation have not yet released any comment about the situation, and XXiF continues to remain a member of the org.

We will continue updating this story with any more information as it becomes available.