While YouTube boasts its fair share of vloggers, makeup artists, and other entertainers who show their face for the camera, not every content creator is forward-facing – including YouTube star Dolan Dark, known for his hilarious meme compilation videos.

Although he’s never shown his face, Dolan Dark boasts a sizeable audience on YouTube, where he occasionally uploads compilations of humorously edited memes.

With over 1.5 million subscribers on the platform, Dolan is also popular on Twitter, seeing a similar following on the site – but his social media antics came to an abrupt halt on September 6.

The meme lord’s Twitter profile was suddenly suspended without a clear reason, leaving fans in the dark as to why the YouTuber was randomly offline. 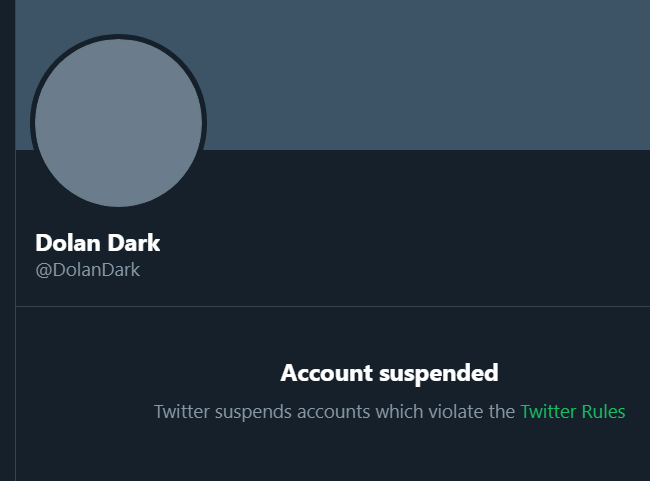 They got @DolanDark cus of his bio says he’s 12 :joyful::joyful::fire::fire:! He will be back soon Twitter actually loves Dolan. Working on it now! pic.twitter.com/URnxEyZ5q8

While the bio hasn’t been directly confirmed as the exact reason for Dolan’s suspension, fans are calling for his profile to be restored, lashing out at Twitter in wake of the debacle.

“Dolan Dark got suspended, F in the chat bois,” one user wrote of the scandal. “And a ‘fuck you’ to Twitter, please.”

Dolan Dark got suspended, F in the chat bois

Dolan wouldn’t be the latest YouTuber to have suffered a suspension, either: the Twitter account of deceased social media star Desmond “Etika” Amofah was suspended a week prior, after his profile was hacked by an anonymous group that posted racist, homophobic, and offensive messages.

That same group of hackers likewise hit such YouTube stars as James Charles and Shane Dawson, even attacking Twitter’s co-founder, Jack Dorsey – a hack that Twitter claims was brought about by a security “oversight” of his mobile provider.

Dolan’s Twitter has yet to be restored at the time of writing, and the balance of the meme realm remains upended.