YouTuber Brooke Houts, who regularly posts videos of her alongside Doberman named Sphinx, has come under scrutiny after an unedited clip was accidentally uploaded to her channel appearing to show her slapping and appearing to spit on her dog.

The clip was accidentally uploaded to her channel on August 5, and showed the 20-year-old acting aggressively towards her pet who was interrupting while she tried to film.

This brought the ire of the online community, who lashed out at the content creator for the way she treated the Doberman, with Houts eventually deactivating her Twitter account due to the backlash she was receiving, although later reactivated it. 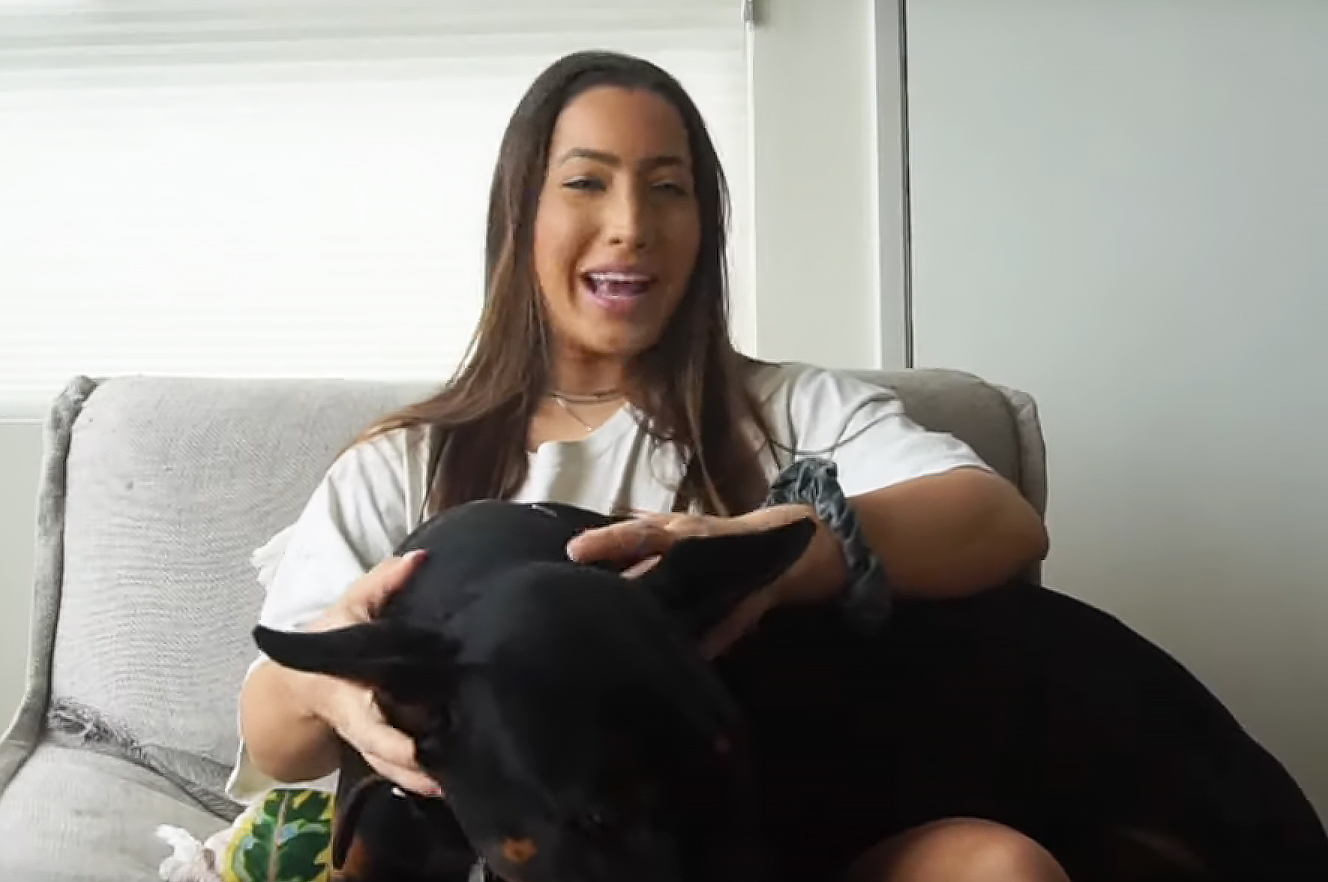 Houts’ doberman puppy has appeared in a number of her videos.
[ad name=”article2″]

The video in question was removed from her channel, and replaced with the video that was originally intended to be uploaded, but was downloaded before it’s deletion and shared on social media.

The clip shows Houts telling her audience that she planned to “prank her dog” by putting plastic wrap across a door and calling it, to see how it would react when it was unable to reach her because of the see-through barrier.

A frustrated Houts can be seen getting jumped on by her dog, and then slapping the dog in the side of the face to knock it down, before following it off camera. A second section shows the dog approach her while she is on her knees, with Houts forcing it down by using her weight to push him to the floor, yell “Stop” and make a sound which appears to be her spitting on the animal.

The final section shows the dog approach her again, and lick her on the face, with Houts again shoving the dog away and following it out of view of the camera.

Many jumped to criticize her behavior towards her dog, with one user stating that if she wasn’t “emotionally mature enough” to control her temper around the dog, she shouldn’t have one.

Others described her actions as “absolutely disgusting,” and labelled her a “monster.”

no excuses will change this at all. absolutely disgusting. sad to think i was a fan a supported a person like you i really hope that dog gets an owner that clearly didn’t get a pet for views or whatever reason you did. a dog is supposed to be loved and not treated that way:(

The 20-year-old has since released a statement on her Twitter account, stating that on the “day the footage was filmed, things in (her) outside life have been less than exceptional,” and that while she didn’t want to “play the victim card,” she is “rarely as upset as what was shown in the footage.”

“That being said, this does NOT justify me yelling at my dog the way I did,” the statement continues. “However, when my 75 lb. Doberman is jumping up in my face with his mouth open, I do, as a dog parent, have to show him that this behaviour is unacceptable, but I want to make it known, REGARDLESS of what my dog does, I should not have acted that way towards him.”

“I want to clarify that I am NOT a dog abuser in any way, shape, or form. My dog (was not) hurt by any action I displayed in this video. If he was audibly or visibly in pain, it would be a different story. I also did NOT spit on my dog, but I understand how it could look like I did.”

To everyone who has been commenting on my social media as of recently: pic.twitter.com/gnxUbfVHdf

The YouTuber finished by saying that she didn’t want to come across as if she was defending her actions, but instead wanted to point out what actually happened, and give an explanation to those who were “rightfully angry”.

She concluded: “I am sorry that you guys had to watch that footage and were upset by it, and I’m sorry to my dog for raising my voice and acting aggressively.”