Family vloggers Cole and Savannah LaBrant are accused of faking an evacuation order in a recent video that saw them leave their home due to the Holy Fire in California.

The video showed the couple nervously evacuating their home with their five year-old daughter and travelling to San Francisco.

Cole told viewers that his daughter’s number one fear is fires.

The rest of the video was a travel vlog with the LaBrants enjoying a vacation in San Francisco, not quite what you would expect from a family potentially losing their home to a wildfire.

It was later discovered by Fox 11 that the LaBrant’s area was never under evacuation notice, neither voluntary nor mandatory.

The Holy Fire was 90 percent contained at the time of Cole and Sav’s video and was not close to where the family lived.

Before the evacuation video was posted, Cole shared on Instagram that he took his wife to San Francisco in celebration of their anniversary.

Neighbors were disgusted in the LaBrant’s for seemingly taking advantage of a disaster for views and spoke to a local Fox affiliate about the video.

“I just think it’s really sad they would exploit a situation that’s as serious as a fire that so many people were evacuated just so they could get more likes or more hits on their channel.”

The original thumbnail on the Cole & Sav channel showed the family with nervous looks as fires raged in the background. It has since been deleted and replaced with a screenshot of Cole talking to the camera. 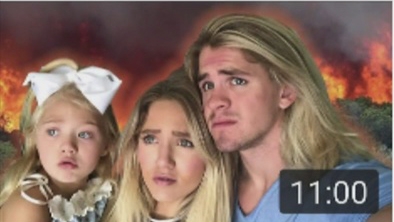 At the time of this writing, the Holy Fire is contained. Cole & Sav have not publicly commented on the situation and denied interviews with local news.