Twitch streamer Felix ‘xQc’ Lengyel was hilariously caught off-guard after he was tricked into playing an ad for the mobile game RAID: Shadow Legends live in front of thousands of viewers.

xQc’s ‘media share streams’ are a favorite with fans, who can submit a video or link along with a donation that the streamer will watch and react to with his chat.

Memes, funny videos and even content created by fans themselves are usually featured, but the most recent media share stream on January 12 included something that caught the Twitch star off guard.

xQc’s media share streams can get pretty odd, but this was a first.

The stream was going on as normal when, out of nowhere, a full advertisement video for the mobile game RAID: Shadow Legends popped up.

The streamer could do nothing but watch the rest of the ad in stunned silence, as his chat exploded with fans laughing at the bold trickery unfolding before their very eyes.

It’s not clear exactly who orchestrated this bait. The user who donated $10 to get the ad played was named RAIDshadowlegends, which suggests it may have been the developers themselves.

That, however, remains unconfirmed since realistically anyone could have used that name in an attempt to make their troll look more authentic.

If developers were indeed the ones behind this, then paying $10 to get an ad on to xQc’s stream – which regularly breaks 20,000 viewers – would be a bold, brilliant, and admittedly shameless marketing strategy. 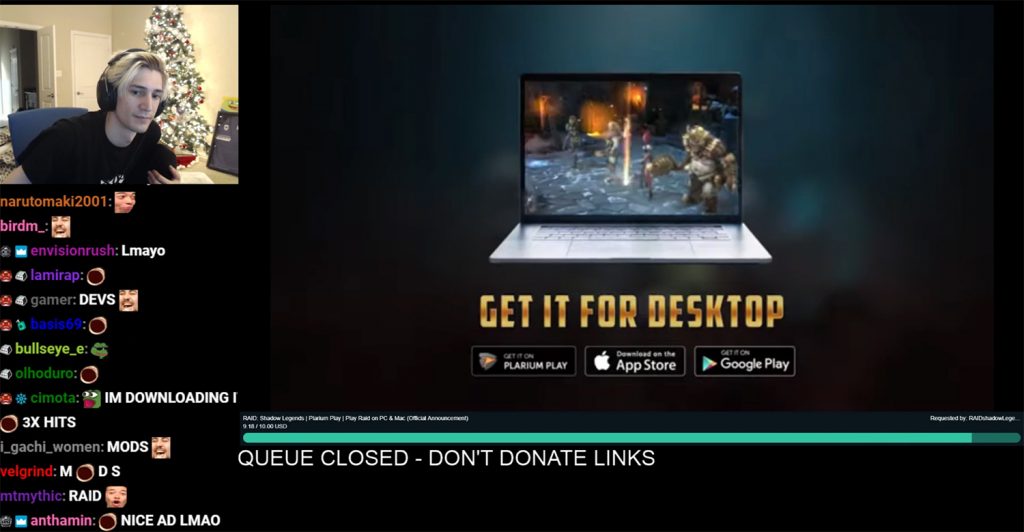 xQc did not seem thrilled about the unexpected ad.

It’s not the first time ads for games have been snuck into big-time Twitch streams either. In 2019 a user impersonating the Escape From Tarkov developers trolled Asmongold with a video promoting the game as he watched videos with viewers.

Advertisements and videos promoting these kinds of games are already all over YouTube and Twitch, but paying to sneak them in a streamer’s media share queue is on a whole other level.