Popular League of Legends, but the American’s return to playing Fortnite Battle Royale had fans in stitches.

Tyler1 has become the face of League of Legends on Twitch, not because he is an ultra-skilled professional player who competes in the LCS, but rather for his unique blend of high-level plays mixed with hilarious trash talk and incredibly funny moments.

Now, Tyler1 has taken his talents to the Battle Bus, making a rare switch to another game, but one which his viewership enjoyed as he provided plenty of amazing moments to keep them entertained throughout the stream. 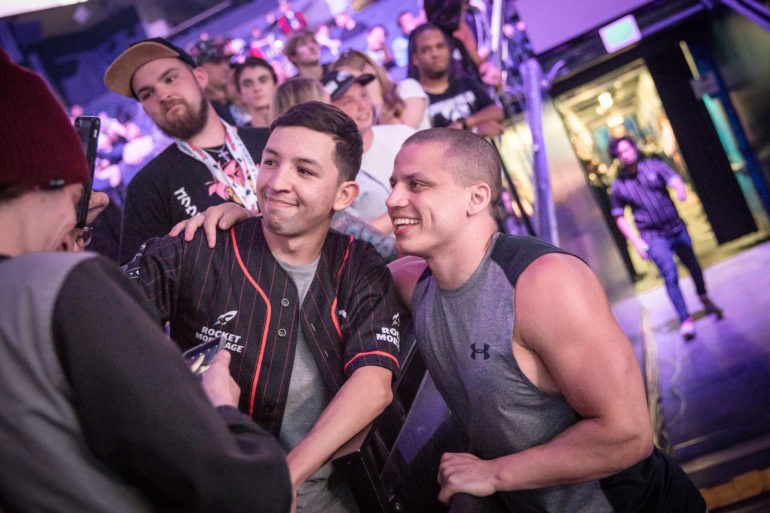 Tyler1 has become the face of League of Legends on Twitch.
[ad name=”article2″]

It didn’t take long for Tyler1 to fall foul to a major bug in the battle royale, with the streamer left confused and angry as he managed to glitch himself under the map.

While riding a Driftboard around near Retail Row, the streamer jumped over a hill and headed down towards the back of the shops which are a prominent feature of the area. Just as he was about to crash into the rear of one of these buildings, Tyler1 and his Driftboard glitched under the map, causing him to die.

“I just bugged the game,” said Tyler1 as he watched in bewilderment. “What just happened? What the fuck just happened! I got exploited!”

Things didn’t get any easier for Tyler1, with the streamer finding himself eliminated in another match by an opponent who the popular LoL streamer claimed was hacking.

As Tyler1 dropped down one of the cliffs near Loot Lake, an enemy player followed him down, slashing away at the Twitch star who desperately tried to use his Infantry Rifle to eliminate his opponent.

Things didn’t work out the way Tyler1 had hoped though, eventually falling to the player before declaring that it was an “invulnerability cheat code” that cost him, and not his missed shots.

Tyler did find some success on the game though, finding a nice double elimination back at Retail Row, wiping out a full duo team in style with a silenced pistol before screaming: “I’m fucking sick! I’m the best!” in celebration.

Tyler1 isn’t the only popular streamer to head back to Fortnite Battle Royale, with Michael ‘shroud’ Grzesiek also giving the game another shot after saying that he was considering trying to qualify for the World Cup.

Whether Tyler1 will continue to play Fortnite is unknown, but it seems incredibly unlikely that he’ll be switching away from League of Legends permanently any time soon.