Twitch streamer in tears after raising $11k for his struggling mother

Thanks to the advent of live streaming, sites like Twitch capture a near-constant flood of hilarious, unexpected, and even tear-jerking moments as they happen in real time, as evidenced by one streamer’s emotional fundraiser on July 28.

Twitch streamer ‘LaserBelch’ organized a 24-hour live stream on July 27 to raise funds for his mother just ahead of her birthday, uploading a humorous teaser for the broadcast on Twitter.

However, LaserBelch’s fundraiser wasn’t meant to purchase his mother a lavish birthday gift: the streamer admitted that life has been “unfair” to his mother, stating in direct messages to Dexerto that she has “fallen on hard times” due to a “divorce struggle that has threatened to leave her homeless.”

My first ever 24 hour stream starts in ~30 min! Here's a brief trailer to show what's in store! 100%+ of the money from this stream is going toward my mom. Life hasn't been fair to her the past few years to put it lightly, and it's her birthday on Tuesday. Let's make her day:grinning: pic.twitter.com/iwGM2snVdS

With these hardships in mind, LaserBelch set out to help give his mother a better life – and was blown away by his viewers’ charitable response.

The streamer managed to raise over $11,000 during his 24-hour stream, gaining nearly 3,000 subscriber points in the process, leading to an emotional reaction from the streamer that saw him shed more than a few tears.

“I just wish that I could convey to you guys how unfair life has been to her,” he explained, openly weeping. “So that you guys did this… there’s nothing left to say. Thank you guys.”

The streamer followed up his successful broadcast with an equally emotional Tweet, joking that he would “never cry that hard on stream again.”

“24 hour stream is officially over,” LaserBelch wrote. “We raised over $11,000 for my mom. At a complete loss for words. I promise I’ll never cry that hard on stream again.”

24 hour stream is officially over. We raised over $11,000 for my mom. At a complete loss for words. I promise I'll never cry that hard on stream again

Laser’s heartwarming stream was met with optimism across the internet, with commeters on sites like Reddit and Twitter congratulating both the streamer and those who donated.

“Out of all the drama that happens on Twitch, it’s heartwarming to see good people come together and help someone out,” one Redditor wrote. “Whoever helped out, you are a hero to this guy.” 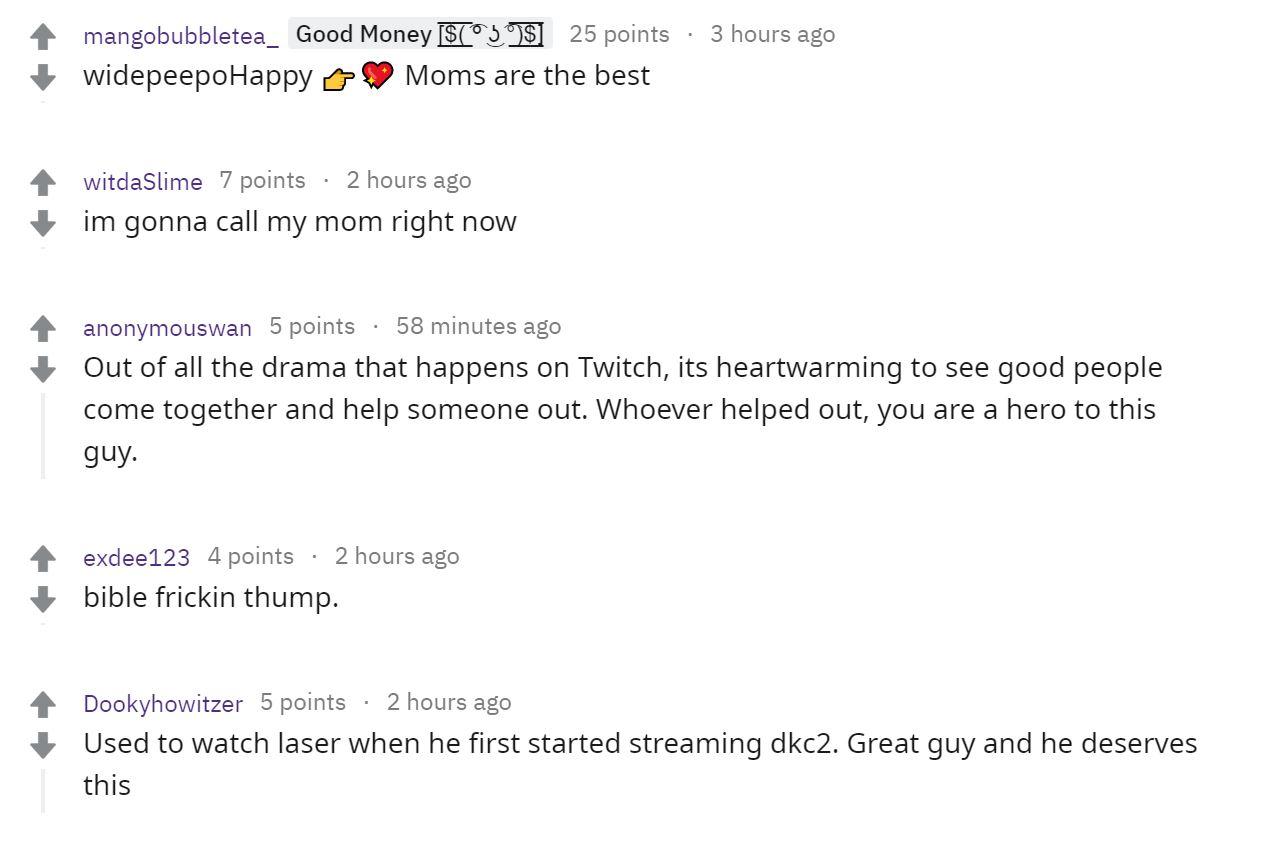 “There probably wasn’t a dry eye watching at the end of that stream,” another Tweeted. “This is only the beginning of amazing things for your mom!”

There prob wasn’t a dry eye watching at the end of that stream. This is only the beginning of amazing things for your mom!

Despite the negativity that often permeates online communities, LaserBelch’s tear-jerking Twitch stream shines a bright light of positivity into the heart of an unfortunate situation – one that will hopefully be markedly improved, thanks to his selfless community.