Popular Twitch streamer Steven ‘Destiny’ Bonnell is under fire after messaging users with spoilers for the eighth and final season of Game of Thrones.

Game of Thrones Season 8 is being touted as one of the biggest TV series ever, with millions of viewers tuning in worldwide to get the latest from the show each week.

Similarly to Avengers: Endgame, Twitch streamers have generally been strict on viewers posting spoilers in chat, trying to prevent them from spoiling the show for other viewers who are not up to date yet. However, popular streamer Destiny has taken an opposite approach – deliberately messaging people spoilers for the show.

One of the messages sent by Destiny (with the GoT spoilers blanked out).
[ad name=”article2″]

On May 10, Destiny became irritated by his Twitch chat, discussing aspects of Game of Thrones and criticising his League of Legends gameplay. In response, Destiny decided to message a number of his followers with spoilers for Game of Thrones, which is released at staggered points across the world i.e. some European broadcasts of new episodes take place after they are first shown in the US.

The messages, one of which was screenshot by the reddit user who received it, came from u/NeoDestinyBot.

The message contains a list of five Game of Thrones spoilers, including character deaths and other spoilers. It then signs off: “Thank you for being supporting Destiny! I hope this brightens up your day.” 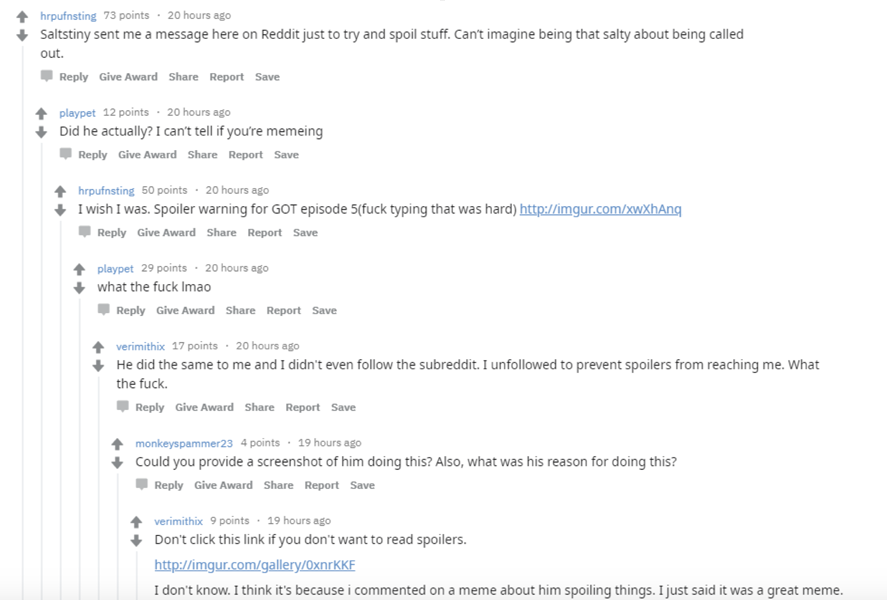 Reddit users tried to figure out the motivation for Destiny’s behaviour.
[ad name=”article3″]

Destiny has over 400,000 followers on Twitch, but now appears to be at odds with some of his viewers, receiving considerable, and understandable, criticism for his behaviour.

There are also accusations on Reddit of Destiny’s followers engaging in the distribution of spoilers, and some of them simultaneously being the victim of these spoilers.