Popular Twitch streamer Ali ‘Gross Gore’ Larsen is widely known for his Runescape broadcasts – but a recent debacle has him circling social media for an entirely different reason.

Gross Gore uploaded a video to Twitter on April 28, claiming that a rogue Instagram account had edited a selfie of the streamer wearing a black facemask, adding a racist caption in an attempt to attack his credibility.

“An anti-racist page has put up the picture with the edited caption, and bro, I’m being brigaded by like, people on Instagram calling me racist and threatening me,” Gross Gore said. “Saying that they’re going to curse me, and hex me, and find me.”

Larsen followed up his video with another Tweet that showed the original photo beside the edited selfie, which appears to have cropped his original Snapchat and added a caption with a racial epithet.

“People online have been editing Snapchats of mine for their sickening humour,” Larsen wrote of the issue. “I have received 100’s of death threats because this edited Snapchat has been going around. …Jesus Christ.”

People online have been editing snapchats of mine for their sickening humour, I have received 100's of death threats because this edited snapchat has been going around.

I have found the original.
You can see how the original was cropped. Jesus christ. pic.twitter.com/qVtehFcirl

Gross Gore appeared to take the situation very seriously, even going on a call with popular streamer Greekgodx in a paranoid tirade.

“They’re threatening me, saying they’re going to hex me – fucking hex me, man!” Larsen can be heard saying over the phone, much to Greek’s apparent amusement. “This is the worst day of my life. I’m being hexed! I’m not even joking!”

While Larsen claimed that an Instagram account had circulated the faked image, the account in question appears to have been deleted, with Larsen claiming that the issue has since been resolved.

“I am so sorry that there are people in this world with sickening humour that enjoy to fuel this world with hate,” Gross Gore wrote in an Instagram comment.” I would appreciate less death threats as, this issue has now been cleared up.”

⚠️ URGENT, PLEASE READ ⚠️ I am sorry to post this to my Instagram but today my reputation has been put on the line & I was marked as a racist because picture 1 was cropped & had been edited with a fake caption in which I had to blur with the red pen as the word was vile & not in my vocabulary. Some sick person did this & sent the picture around to portray me as a racist which I am 100% not. The second picture is the full picture with the original caption. I am so sorry that there are people in this world with sickening humour that enjoy to fuel this world with hate. I would appreciate less death threats as this issue has now been cleared up. Message my inbox if you ever need to talk to me & have further questions. Thanks for reading & understanding.

Some commenters aren’t buying his story

However, this hasn’t stopped a slew of vitriol from being spewed underneath his posts on the subject, with some commenters accusing the streamer of faking the entire debacle.

“Lying sack of shit,” one user wrote. “Better not see you around.”

“You have have no black friends and you’re not following any black people,” another said of the issue. 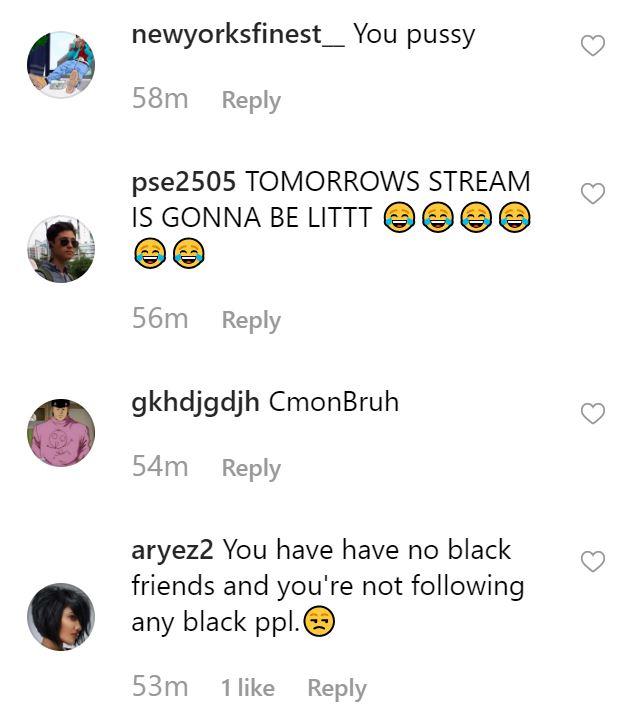 Gross Gore came under fire after alerting his followers of a faked screenshot circulating social media, showing a cropped selfie of him wearing a facemask with a racist caption.
500https://www.instagram.com/p/Bwz7Yj4hD_q/?utm_source=ig_web_copy_link

Gross Gore was similarly at the center of drama in October 2018, after being accused of sexually harassing female attendants at Runefest 2018 and physically assaulting another streamer.