Twitch accused of stealing Dauntless video from YouTuber to promote itself

As one of the net’s most popular live streaming platforms, Twitch has seen its fair share of controversy, following the scandal around popular streamer Alinity and her cat-throwing drama – but now, the site is under fire for a different reason, entirely: this time, for stealing content from popular YouTuber ‘H20Delirious.’

Twitch posted a promotional video to Twitter on July 23 that showcased a slew of footage from streamers on the platform playing Dauntless, a free-to-play action role playing title similar to Capcom’s ‘Monster Hunter.’

However, not all of the footage was taken directly from Twitch streams: in fact, one clip was taken from YouTuber H20Delirious’ channel, which boasts over 11 million subscribers at the time of writing.

This caught the attention of another popular YouTuber, ‘CaRtOoNz,’ who called out Twitch for “stealing” the clip to promote their own site.

“How you gonna just steal a clip from H2ODelirious’s video and just throw it in like that to promote your own platform?” Cartoonz wrote. “Legitimately, that’s like the scummiest shit I’ve ever seen from a company as large you guys.”

How you gonna just steal a clip from @H2ODelirious's video and just throw it in like that to promote your own platform? Legitimately that's like the scummiest shit I've ever seen from a company as large you guys… https://t.co/gb37dhK01X

Cartoonz wasn’t the only high-profile YouTuber to call out the company, either: British YouTuber ‘MiniLadd’ likewise spoke out on the matter, writing, “You can clearly see it’s edited too, wtf.”

You can clearly see it’s edited too wtf

Despite the backlash, some commenters on Reddit are claiming that Twitch may have been within their rights to use the footage, noting that both Twitch and Phoenix Labs (the developers of Dauntless) are currently in a partnership to promote the title, while many content creators (H20Delirious included) are even sponsored by the game.

“Plenty of content creators were sponsored by Dauntless,” one commenter said of the drama. “Twitch and Phoenix Labs (Dauntless Devs) are in some partnership to promote the game. Twitch compiles footage of all sponsored content creators to create this ad.” 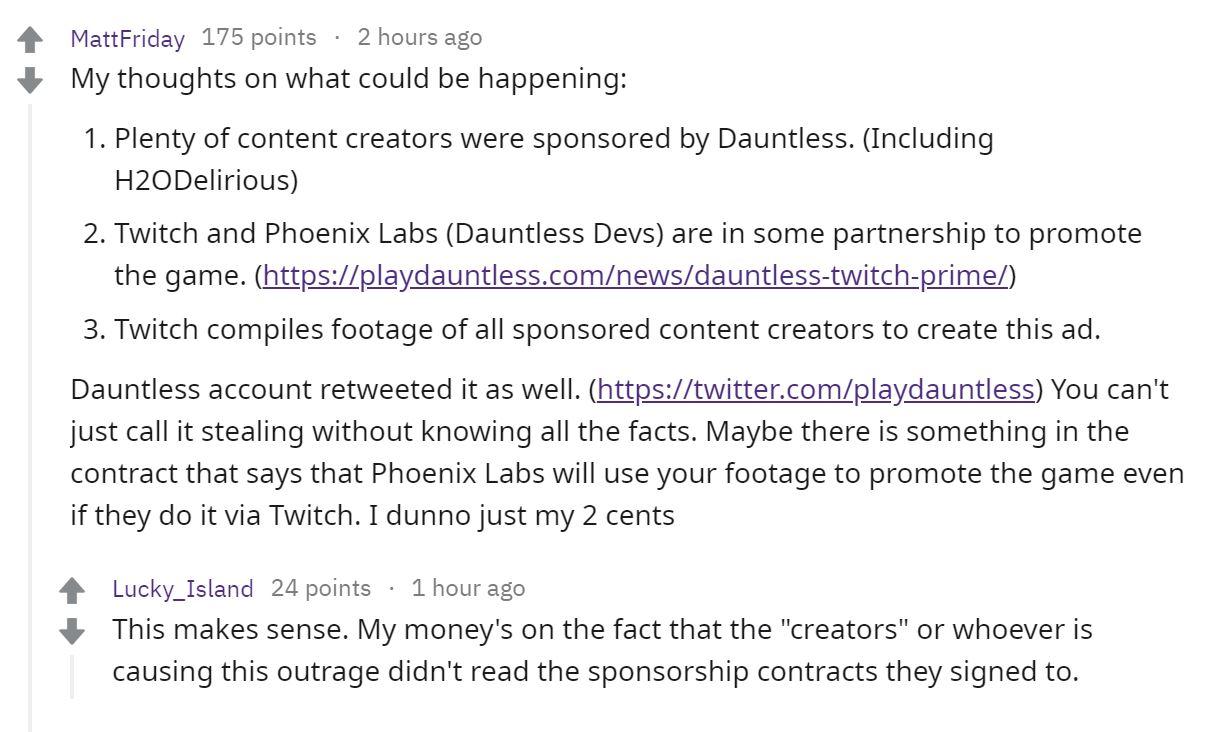 Reddit commenters were quick to point out that Twitch could be completely within their rights to use H20Delirious’s footage, thanks to a partnership with Phoenix Labs.
600https://www.reddit.com/r/LivestreamFail/comments/ch8kzk/twitch_stealing_content_from_youtuber_to_promote/[ad name=”article5″]

With both H20Delirious and Twitch having yet to speak out in response to the accusations, the matter is still up in the air, and continues to stir controversy in wake of Twitch’s divisive post.