Trisha Paytas hits back at outrage after claiming to have DID

Internet star Trisha Paytas is hitting back at online outrage, after being called out by top YouTuber Anthony Padilla for claiming to have Dissociative Identity Disorder — commonly called Multiple Personality Disorder.

Padilla is known for his popular YouTube series, titled “I Spent a Day With,” where he sits down with a variety of people from various demographics for an in-depth discussion about their life experiences.

One of his videos in this series focused on a woman with DID; and considering their eye-opening conversation, was quick to call out Paytas after the star uploaded a video claiming to also have the disorder.

In her March 12 video, titled, “Meet My Alter,” Paytas admitted to “self-diagnosing” herself with DID and MPD, claiming that she felt she’d never created her own personality and was always “borrowing” from other people’s identities.

Needless to say, her video quickly went viral online, with both Padilla and his girlfriend Mykie posting Instagram stories expressing their disappointment over the matter.

“Claiming you have Dissociative Identity Disorder is not a cool excuse to mock people in the community and call them crazy,” Padilla wrote over a recording of Paytas’ video.

Trisha Paytas rly self diagnosed DID, huh? This clip on Mykie’s story is killing me bye pic.twitter.com/7S8KxM1ASX

Fans were quick to echo similar sentiments, with commenters across Twitter and YouTube taking issue with Paytas’s video.

“…this is VERY damaging to an already damaged and alienated community,” one user wrote. “This hurts me to watch. You spread so much mis-information in this, and quite frankly, it seems as though you are trying to use this as an excuse for your bad behavior.” 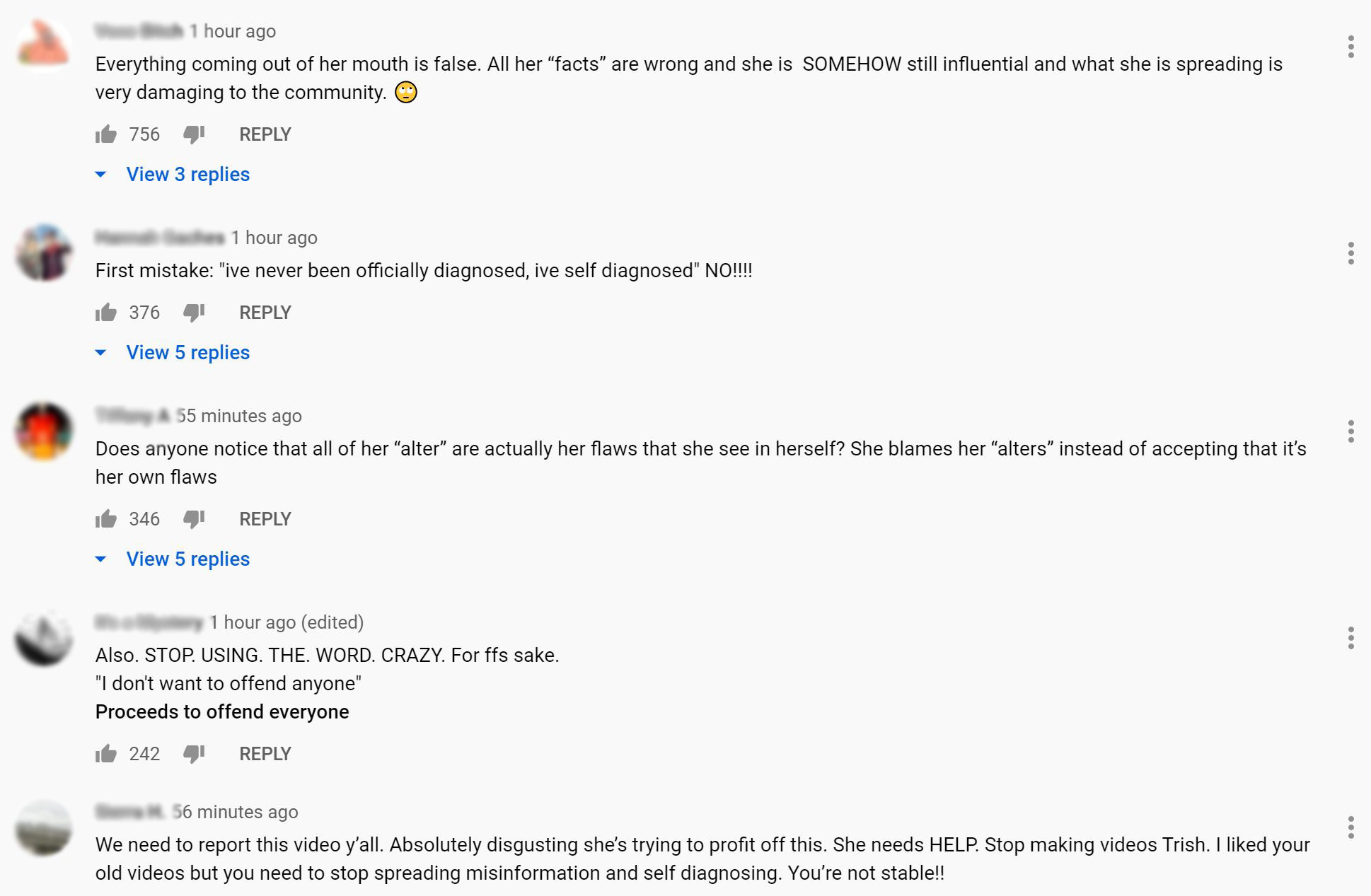 Trisha paytas claiming she has DID & spreading false information is absolutely disgusting & so damaging to the community. I’m so so sorry to those this has impacted.
Also those commenting ‘diagnosing’ her with BPD – stop. Just fucking stop.

The YouTuber has since responded to the widespread hate against her due to the video, calling out Padilla in particular for his Instagram story on the subject in an upload the very next day.

“I think it’s apparent to everybody that has watched me for some time that I have a lot of mental health issues,” she argued. “…the minute I open up about it, I’m s**ted on, and told, ‘No you’re not.’”

Even the woman featured in Padilla’s video on DID has reacted to Paytas’s initial video, taking special care to note that Paytas called her “crazy” when describing her first impressions of their conversation.

This comes after the backlash Trisha received in 2019 after coming out as a transgender man — another issue brought up in critics’ replies to her most recent divisive video.