Reddit is commonly known as “the front page of the internet”, with millions of users visiting the site every month to comment on hot topics such as video games, Twitch streamers, and YouTube videos.

With website traffic so enormous, it’s a breeding ground for many different beliefs, with debates and arguments happening on the daily.

We’ve put together a list of the most downvoted Reddit comments, so you can see what can happen when a user faces a gigantic court of public opinion that doesn’t agree with them.

In October 2016. US Green Party candidate Jill Stein conducted an ‘Ask Me Anything’ on the website when one of her answers to a user asking about why she was opposed to nuclear energy backfired.

In the reply, the physician stated that nuclear power was “dirty, dangerous, expensive and obsolete” because of its toxicity, citing examples such as the Chernobyl and Fukushima accidents that saw mass devastation to reinforce her comment.

Users slammed the politician’s reply, stating that she’d been misinformed and her information was false, and the response collected almost 12,000 downvotes.

After Bethesda released Fallout 76 in November 2018, fans were unhappy with the performance of the online action role-playing game and aired their concerns online, with one player starting a thread on Reddit to complain about the developer’s lack of comment on the outrage.

The account for Betheda Game Studios replied to the post, simply stating that it was thankful for the assessment and is “always looking through posts, tweets, and comments for any and all feedback on the game.”

Players were outraged by the generic nature of the response, and the comment ended up garnering 15,400 downvotes. 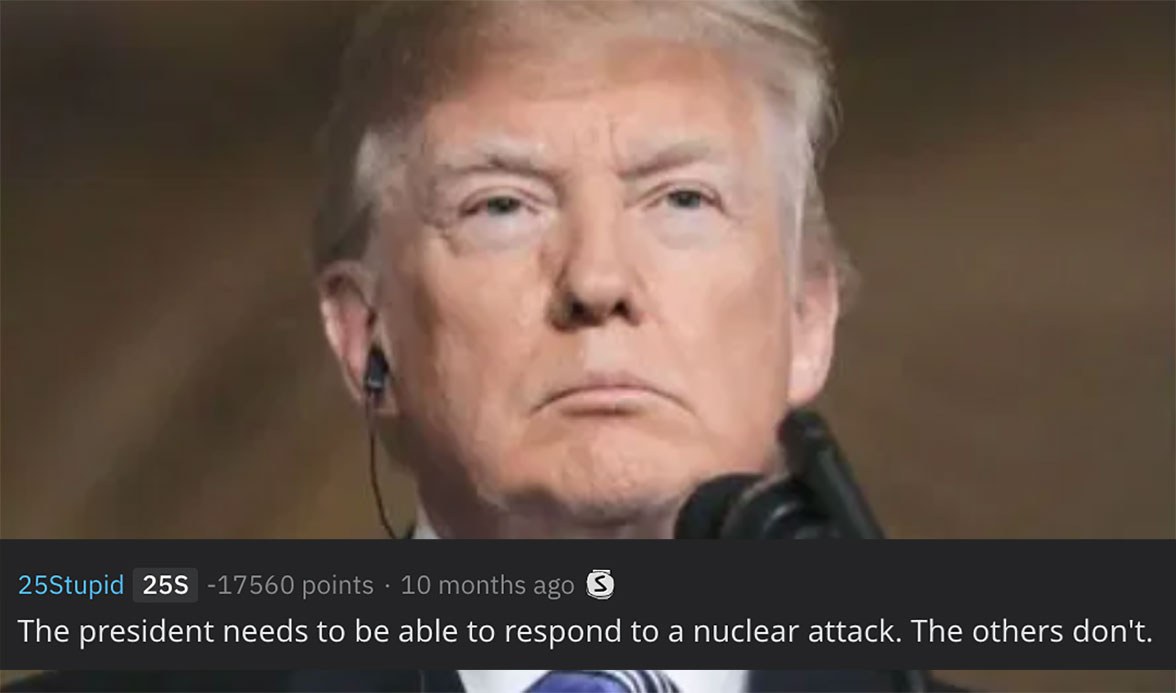 In November 2018, news outlet The Independent wrote an article about US President Donald Trump cancelling a visit to a First World War memorial because of ‘poor weather’ conditions, which ended up on the front page of Reddit.

People were outraged over the President’s decision not to attend, but one user decided to defend him in the comments, and stated “The president needs to be able to respond to a nuclear attack. The others don’t,” which led to them receiving 17,500 downvotes. 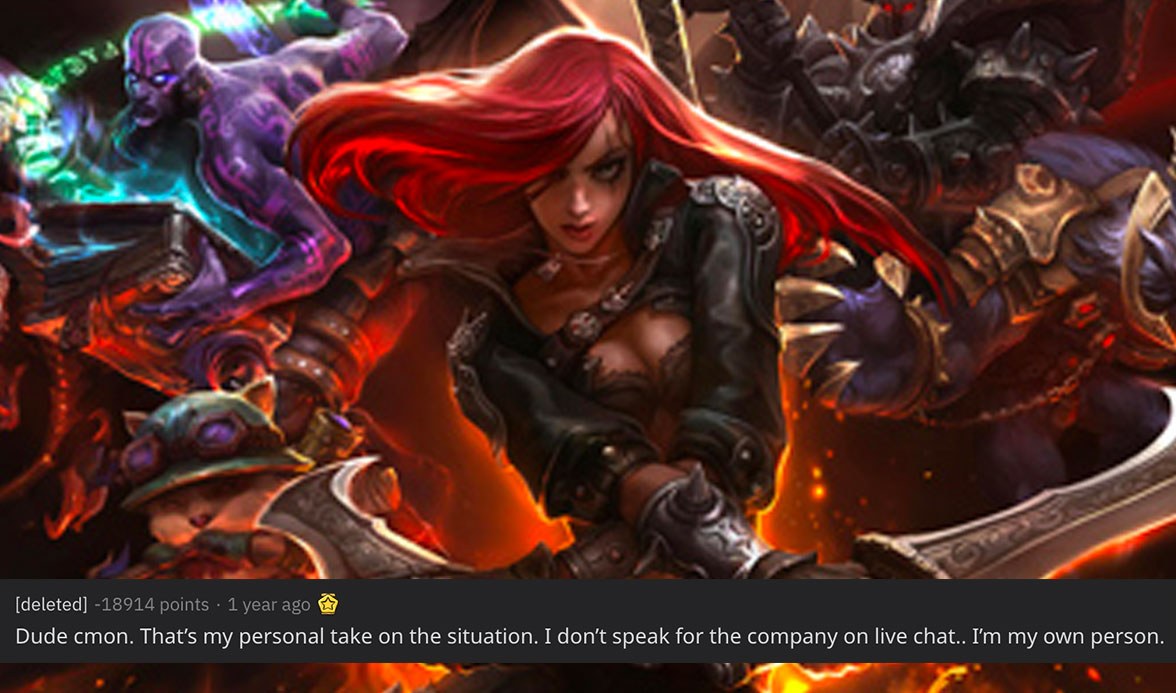 A lead member of Riot Games angered many after it was revealed that he’d made some inflammatory comments about Twitch streamer Tyler ‘Tyler1‘ Steinkamp in October 2017 in a League of Legends Discord server. The employee stated that “he [Tyler1] looks like a damn humunculous” and “honestly.. its fine he’ll die from a coke overdose or testicular cancer from all the steroids.. then we’ll be gucci.”

The comments made their way to the LoL subreddit where players were furious, calling for the member’s immediate firing from the company. He decided to respond to the post, and stated that it was his personal take and “I don’t speak for the company on live chat.. I’m my own person,” receiving 19,200 downvotes for the reply. 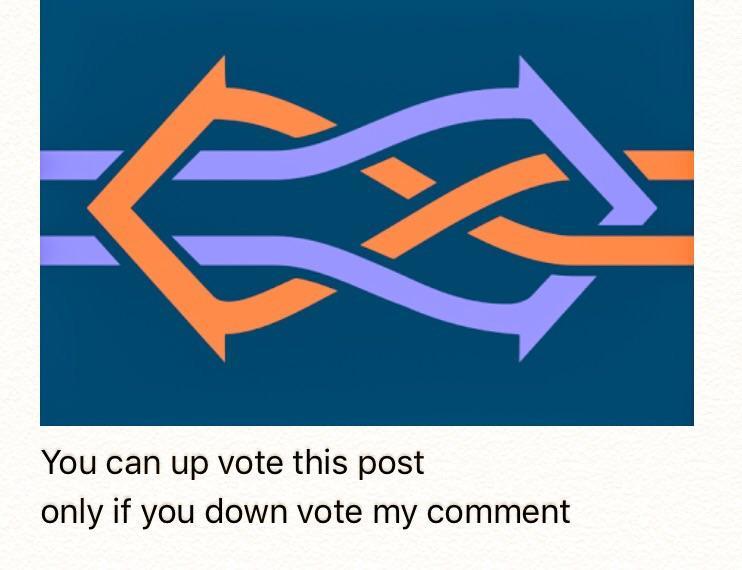 A user literally asked for downvotes.

In 2017, a user of the me_irl subreddit posted a thread called “You can up vote this post only if you down vote my comment” and then commented a reply of a down pointing emoji.

While this is as far removed from a juicy reason as you could probably get, Reddit did its job and voted down the user’s post 35,600 times and the reply 23,400 times. 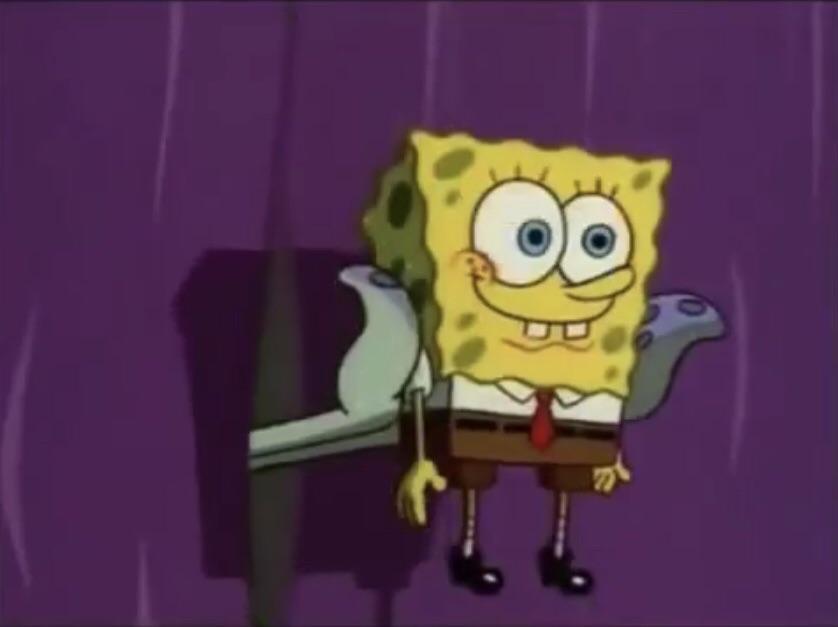 Someone used Spongebob to gather a ton of dislikes.

Another less-than-interesting reason for one of the most hated comments follows off of the last: someone literally asked for it. In 2018, a person posted to the BikiniBottomTwitter page, stating that “You can only upvote this picture of spongebob if you downvote the picture of squidward that I’ll link in the comments.”

After posting a link to an image of the Spongebob Squarepants character in the comments section, it collected almost 37,000 downvotes, confirming that Spongebob’s coworker is in fact the lesser liked character in the show. 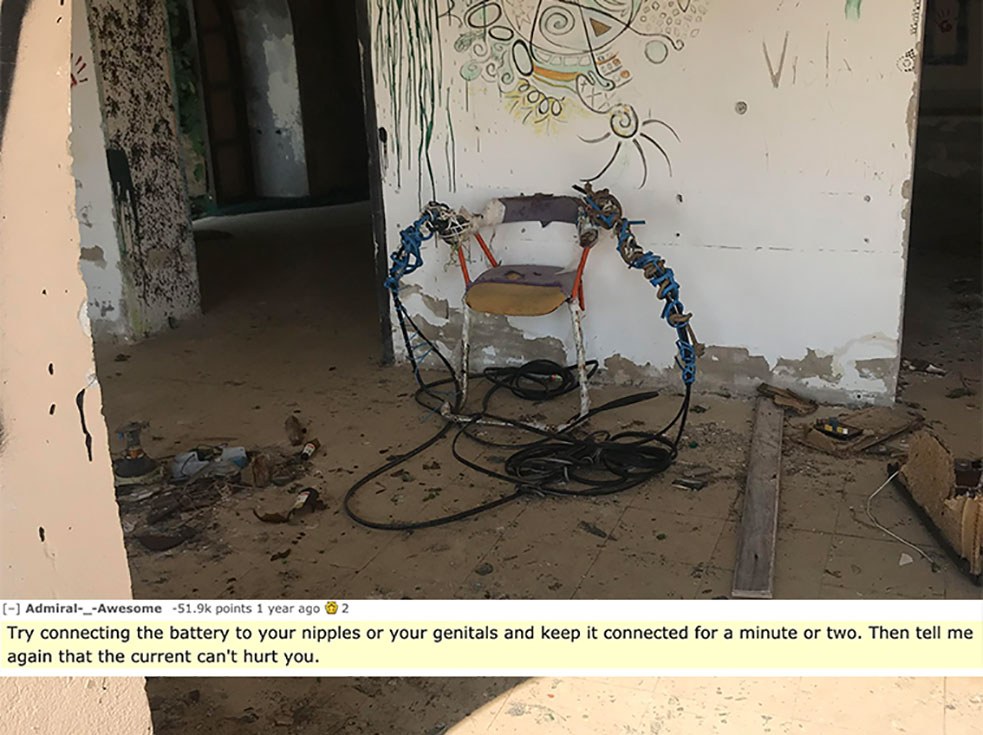 With what is probably one of the most bizarre comments on this list comes from back in 2018 after a user posted a photograph of a homemade electric chair they’d discovered while exploring an abandoned building in Croatia.

It’s unclear as to why somebody went to great lengths to make the contraption, but it’s a scary thought all the same.

Many people in the comments laughed about the fact that a homemade device wouldn’t have anywhere near the amount of power as a real one, to which someone replied: “Try connecting the battery to your nipples or your genitals and keep it connected for a minute or two. Then tell me again that the current can’t hurt you.” 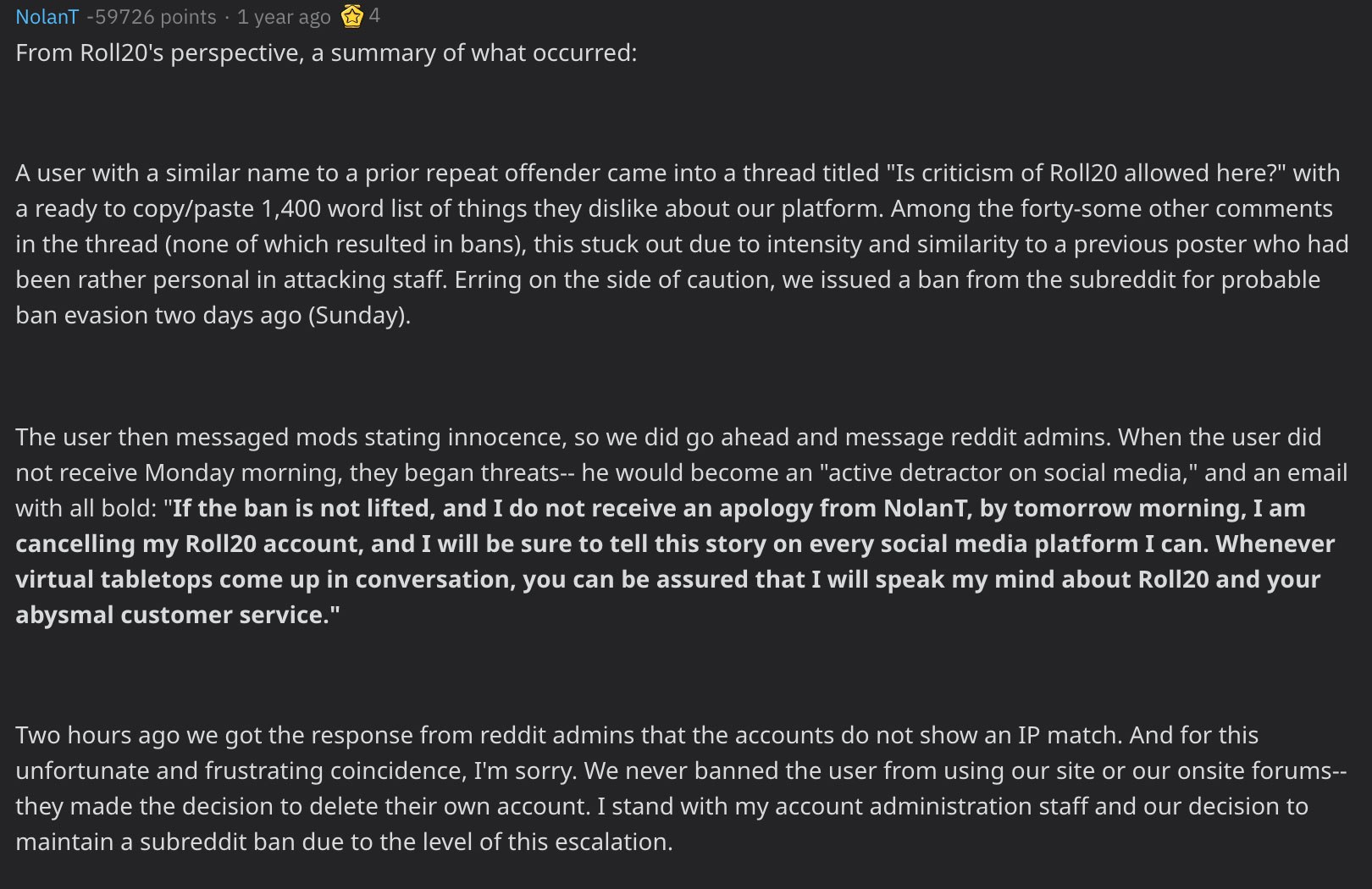 A mod was criticized after refusing to unban a user.

On the subreddit for virtual tabletop games website Roll20 in September 2018, one user complained of being unfairly banned after a mod mistook them for somebody else of a similar name. Upon trying to resolve the issue, admins and customer support refused to double down.

The subreddit mod was later revealed to be the co-founder of the Roll20 company, and commented on the thread, stating “[I] stand with my account administration staff and our decision to maintain a subreddit ban due to the level of this escalation.” Outraged members of the community downvoted the reply over 59,700 times. 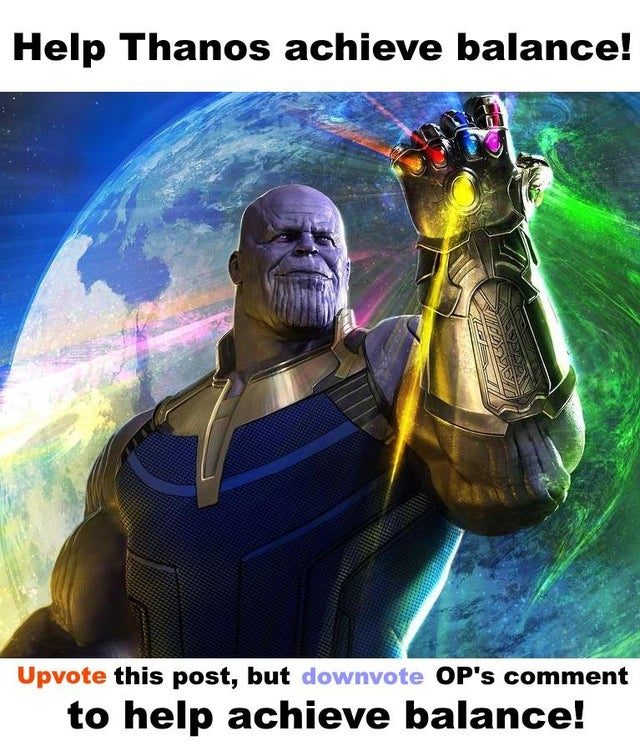 After the release of Marvel’s Avengers Infinity War in 2018, a member of the thanosdidnothingwrong community posted an image that said “Upvote this post, but downvote [original poster’s] comment to help achieve balance!”.

This is a reference to the movie’s antagonist that *spoilers* decides to erase half of all living things to achieve a ‘balance’ across the universe.

People did indeed help Thanos balance things out, and downed the comment over 88,900 times. To quote the movie: “Perfectly balanced, as all things should be.”

Battlefront 2 players were less than satisfied with EA’s response.

Electronic Arts released the sequel to Star Wars Battlefront in November 2017, and straight off the bat, players complained about paywalls and microtransactions. It was this that really kicked off the debate of game developers including paid content in an already-paid-for game.

People were unhappy that they’d splashed $80 on a Star Wars title that had one of the series’ most popular characters, Darth Vader, locked behind a paywall, and complained on Reddit.

EA responded to the backlash, and stated that “The intent is to provide players with a sense of pride and accomplishment for unlocking different heroes,” and “we’ll be making constant adjustments to ensure that players have challenges that are compelling, rewarding, and of course attainable via gameplay.”

Not satisfied with the developers’ reply, players down voted the response a whopping 667,800 times, making it the most hated comment on the whole website as of the time of this article.