Jaryd ‘Summit1g’ Lazar swapped Grand Theft Auto RP for Micreated during his April 25 Twitch stream, leading to one of the funniest encounters he’s broadcasted in quite some time.

The popular streamer opted to play Miscreated ahead of H1Z1 as he believed he could find more players across the map, and he wasn’t far wrong. In fact, one player just kept coming back for more and it was a familiar voice (or face), too.

Summit1g came across a player who he has encountered on GTA V on a number of occasions in the past, going by the name of ‘Taco,’ alongside his teammate in the middle of an open space. 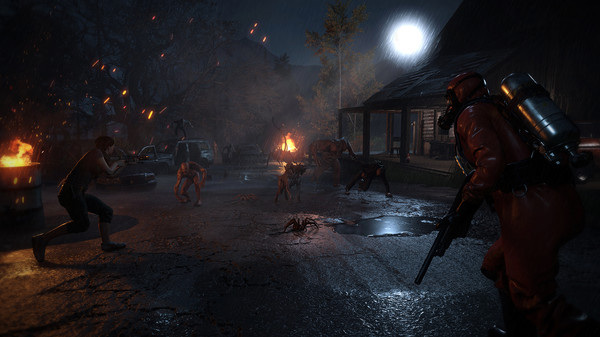 Miscreated is a post-apocalyptic survival game, developed by Entrada Interactive and available on Steam.
[ad name=”article2″]

Summit1g spotted Taco and his partner in the distance, running through a field of long grass, before he decided to take a shot at one of them who had stopped still. He sprinted over to the harmed player, seemingly to offer some help.

“Who shot you?” he asked, as blood poured from the enemy’s body. Moments later, Taco turned on Summit and was hilariously shot down with his Magnum, before the second player was brutally eliminated with an axe – as seen in the clip below. They didn’t stand a chance.

The second meeting was very different

However, the next time the two met, let’s just say that things were a little different. Just moments later, Summit came across Taco on a highway in Miscreated, this time without a partner in sight.

“I’m going to need you to put your hands up,” Summit demanded. “Oh shit man, listen brother… I’m going to need your pants, alright. I need a new set.” As the streamer was the only one with a weapon in hand, a Magnum pistol to be exact, Taco quickly obliged to the request. With both using voice changers, it was clear that viewers were in for something hilarious from the outset.

The streamer had one obstacle in his way, though, a barrier from a highway which the game just didn’t want him to cross for a brief moment. Once he jumped over, he collected the set of jeans from the player before letting him walk off into the distance, completely unharmed.

As is the case with many funny moments like this, sometimes it’s better to watch the whole thing play out. If you’re not one for snippets, soundbites and short clips, check out the full video below.

This isn’t the first funny moment Summit1g has created for his viewers on Twitch and it certainly won’t be his last, no matter what game he’s playing.

Whether or not he will be returning to GTA RP, Sea of Thieves, or even Apex Legends remains unclear. But once he does, you can bet he’ll be one step ahead of his opponents.