SSSniperWolf hits back at KEEMSTAR for mocking one of her fans

Popular streamer and YouTuber Alia ‘Lia’ Shelesh (known by her tag SSSniperWolf) has hit back at Drama Alert host KEEMSTAR for bullying a fan of hers over Twitter.

The incident began when KEEMSTAR accused Lia of photoshopping her waist in an Instagram post, in which she showed off her Fortnite-themed Halloween costume.

Twitter user snookerluke came to her defense underneath one of KEEMSTAR’s Tweets, writing, “Why you always hating on Lia?” 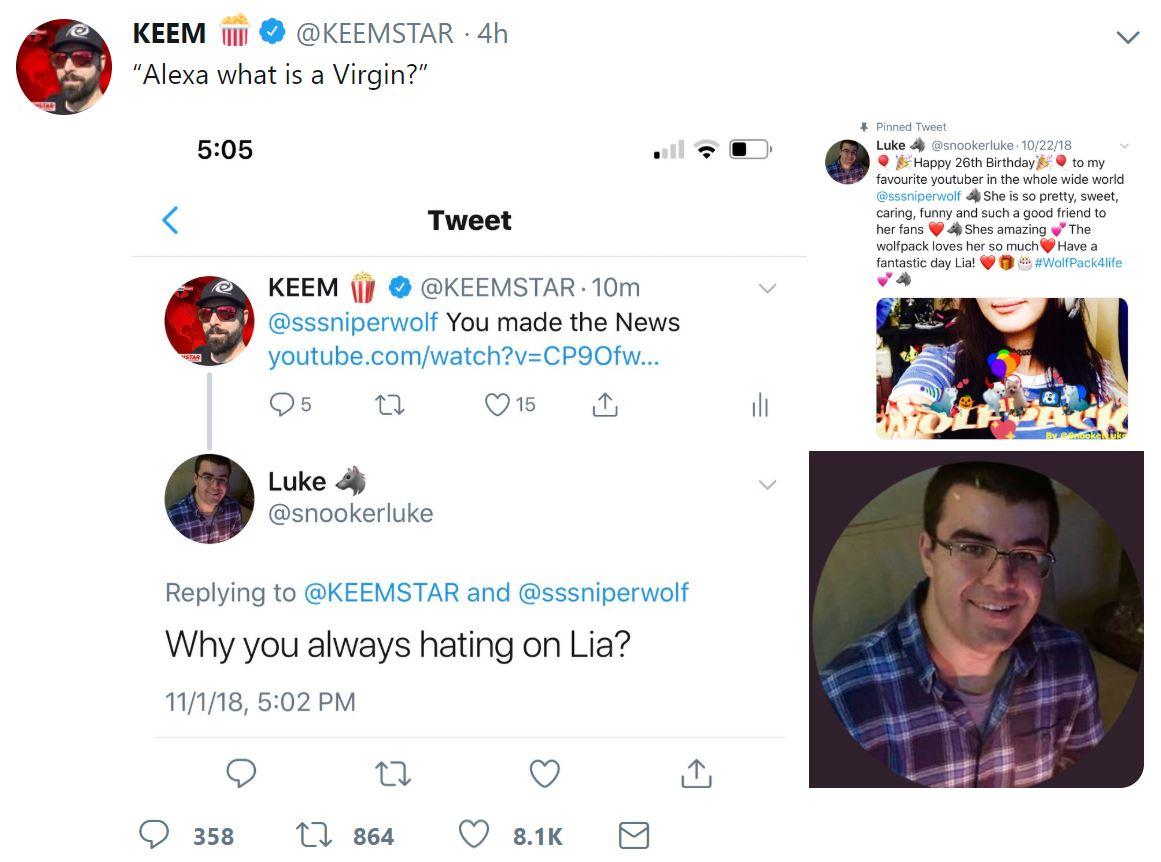 KEEMSTAR then posted a screenshot of the reply with another post of Snookerluke’s, where he wished Lia a happy birthday on October 22nd. “Alexa, what is a virgin?” KEEMSTAR said of the screenshots.

Snookerluke protected his Tweets in response and updated his bio to read, “Thank you KEEMSTAR. Goodbye guys ☠.” KEEMSTAR appeared to realize the severity of the situation, posting a screenshot of the fan’s bio with the caption, “I feel bad. That SSSniperwolf fanman I called a virgin (jokingly) is kinda upset. Tell him it’s just jokes.”

I know you don’t like me but this is absolutely disgusting. You called one of my fans a virgin and all your followers attacked him and now he deactivated his account and you say it’s a JOKE? This is not a JOKE https://t.co/gKdxqLTglB

Lia took issue with KEEMSTAR’s treatment of her fan and called him out in a reply to his Tweet, writing, “I know you don’t like me, but this is absolutely disgusting. You called one of my fans a virgin and all your followers attacked him and now he deactivated his account and you say it’s a JOKE? This is not a JOKE.”

However, KEEMSTAR didn’t Lia’s response very seriously, responding with, “Since you are a Photoshop pro on Instagram, Maybe you can Photoshop my nasty tweet into me saying something nice.”

Other users have come out in defense of Lia and her fan, to which KEEMSTAR has granted similar responses – all of which are now deleted.

The fan has since changed his Twitter bio, which now says, “Have to ruin me cuz I like sssniperwolf.”