The amount of drama in YouTube’s beauty scene is becoming difficult to keep track of. Jeffree Star, among others, is facing unsavoury allegations from a host of his ex-employees and friends. It is one of his ex-models – Kameron Lester – who has played a major part in this ongoing controversy.

Lester, in a lengthy Instagram TV broadcast, levelled multiple allegations against Star, including the fact that the make-up mogul was regularly in contact with Shane Dawson. Their conversation allegedly settled on James Charles, and their feelings regarding the YouTuber.

The conversations Lester references have caused many to settle on the idea that Star and Dawson were behind Tati Westbrook’s video on James Charles – entitled ‘BYE SISTER’. The video ‘exposed’ James Charles, but Charles has since responded and Westbrook retracted a host of allegations.

Now, responding to the accusations that he was part of the campaign against James Charles, Dawson has attacked the beauty industry on YouTube, and defended himself on multiple fronts.

While he admits to knowing that Tati Westbrook was going to make the video on Charles, he refutes that he was a motivating factor behind it. He also states that he has never “tried to ruin a career or make someone look bad in my 15 years on YouTube”.

The screenshots from the deleted tweet can be found below: 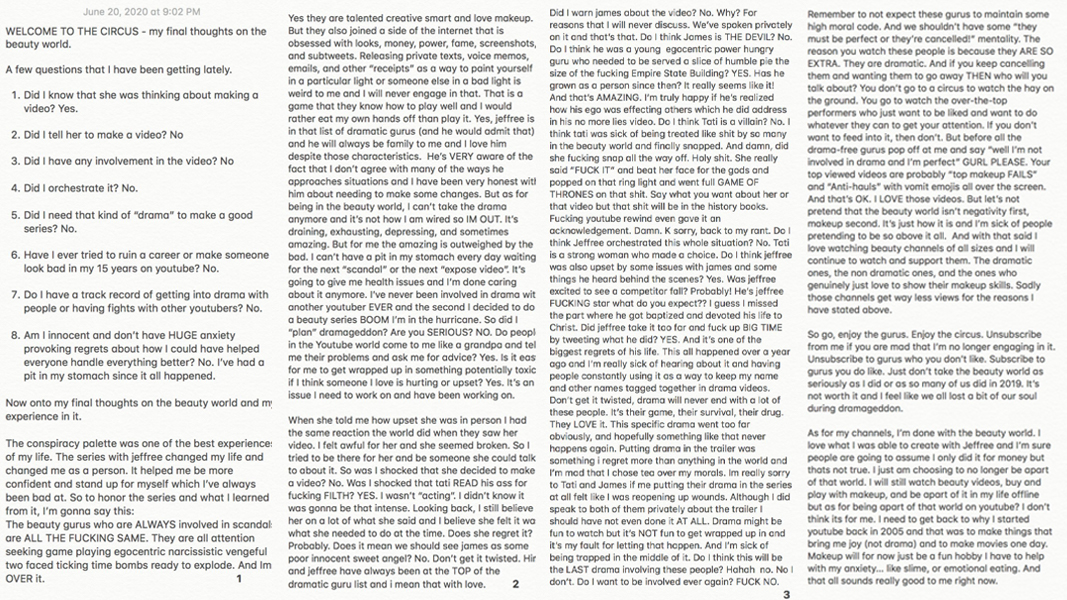 Dawson essentially stated his desire to remove himself from any future drama, and that he did not warn Charles about the video. However, he stated that the pair have discussed the matter in private and he will not make the conversation public.

Furthermore, he hit out at YouTube’s beauty and make-up scene, claiming it is full of people who have become “obsessed with looks, money, power, fame, screenshots and subtweets”.

He has since explained why he deleted the tweet, stating that: “But I don’t want this energy in my life or on my timeline. I’m too sensitive for this shit and I’m done.”

I deleted everything. I’m done. For those who wanted me to “address it” I did. I’m sure u can find it reposted somewhere. But I don’t want this energy in my life or on my timeline. I’m too sensitive for this shit and I’m done.

Jeffree Star, for his part in the ongoing drama, defended himself on the Mom’s Basement Podcast, asking why he would try and “drag” James Charles, when he has no need to.

As much as this drama seems to be dragging on, it doesn’t seem that we’ve heard the end of it yet.