If you’re still having nightmares over the color of the dress or the Yanny or Laurel debate, we’ve got bad news – there’s another viral headache confusing the internet.

On December 21, a Tik-Tok video of a man on a swing in the snow went viral online, as people couldn’t make up their minds as to which direction he was facing – is it towards the camera, or away from it?

Baffled viewers can put their tinfoil hats away, though, as definitive proof has surfaced that will hopefully lay this whole optical illusion saga to rest once and for all.

Im losing my mind can someone tell me which way he’s facing pic.twitter.com/gIvIDzRkOd

In the video audio, a group of friends can be heard debating which way the man was swinging. “[His] back legs are bent this way! His feet are bent straight out!” one person exclaimed. “I bet you $500 cash right now,” another argued.

The clip swiftly blew up on the internet, with many users unable to figure out the definitive answer as to which way the man was facing.

“Have y’all ever even been on a swing?? [Your] legs are legit in front of you so that [obviously] means they’re facing the wall,” one person disputed, which seemed to be the main consensus for many people.

have y’all ever even been on a swing?? ur legs are legit in front of you so that obvs means they’re facing the wall,,,,, pic.twitter.com/8tcGvmb26B

However, some eagle-eyed viewers have seemingly found out the definitive answer to the playground dilemma – and it appears as though the man is actually facing the camera.

How do they know this? If you look closely, at one point of the video, the swing bar covers his face, meaning that it’s impossible to be in the direction of the wall.

“This proves he’s facing the camera,” one user tweeted, alongside a screenshot of the video where the metal bar obscures the swinger’s face. 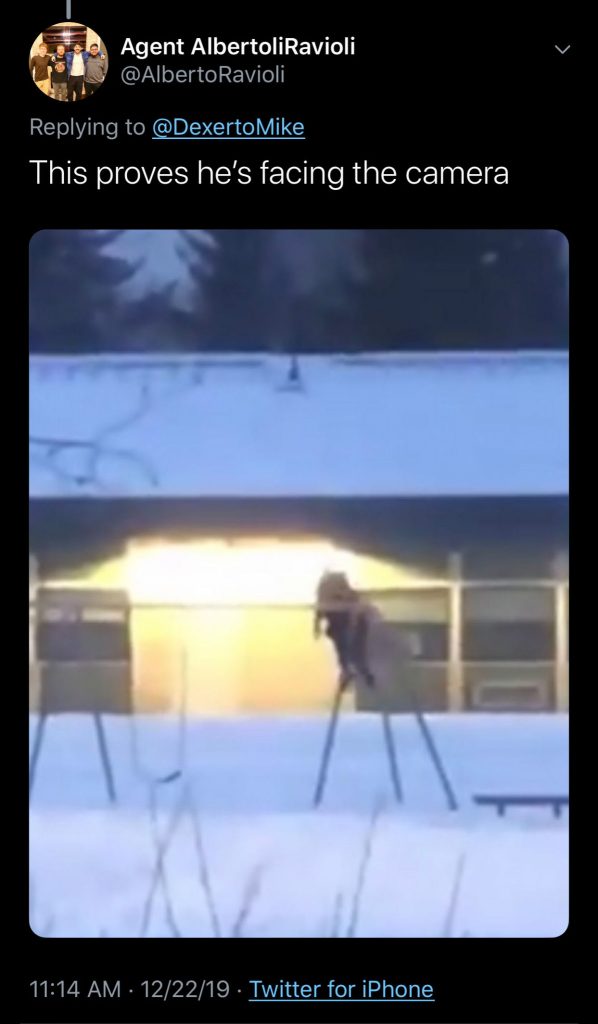 “He goes through the swing set bars which is IMPOSSIBLE, therefore he is facing the camera. Case closed,” another user tweeted in frustration.

2015 saw the web go absolutely nuts over the color of a Roman Originals dress, which some saw to be gold and white, and some blue and black. In 2018, a sound clip surfaced which split listeners as to whether the voice was saying Yanny or Laurel.

Regardless of your opinions on the swinging man, it’s hard to argue with clear evidence. Maybe it’ll all be put to bed now until the next optical illusion comes along – we hope, at least.