Pew News, often called “the most reliable news show on the internet” by his fans, premiered in February of 2018 and features PewDiePie commenting on different news stories both online and off.

Fans of the show on Reddit noticed that Pew News had disappeared during the YouTuber’s lengthy race with T-Series and fans had been too distracted by the contest to notice. 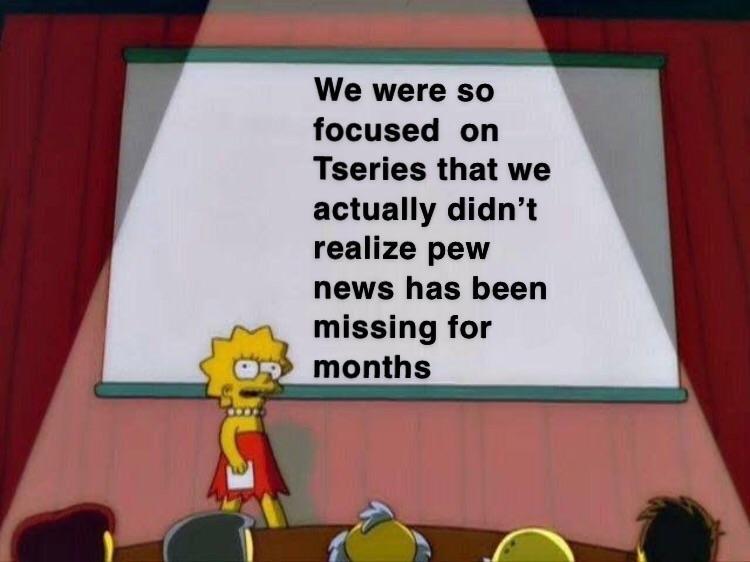 Why was Pew News MIA?

The YouTuber jokingly admitted that Pew News had been on a break before the May 5 episode because he wanted to lay low for a bit.

“It’s almost like I wanted to avoid just a little bit of controversy just for a few weeks, how about that?” Pewds said. “That’s right everyone: two weeks of PewDiePie, no controversy. That’s a new record.”

With the main campaign against T-Series apparently over, Pewds brought back pew news in his May 5 video, where he discussed the ongoing saga of fellow YouTuber Etika.

Now that the show is back, we’ll just have to see if the YouTube king can keep himself separate from any controversy, or if Pewds will find himself in hot water once again.

What’s next for PewDiePie?

After the epic contest with T-Series didn’t end up going his way, PewDiePie seemed to slowly accept defeat after T-Series took a large lead in late April.

Recently he’s brought back the popular ‘Last Week I Asked You’ segment (LWIAY), as well as ending the ‘Subscribe to PewDiePie’ movement, after some fans took it a little too far.

Even though the race is basically over, PewDiePie and his subscribers are still looking forward to the 100 million subscriber mark, even if he reaches it after T-Series.