Drama Alert’s Daniel ‘KEEMSTAR’ Keem is no stranger to esports, as evidenced by his past tournaments – but Fortnite pro TSM Myth is asking for a unique take on his competitive gaming events.

Team SoloMid’s Ali ‘Myth’ Kabbani raised a suggestion to KEEMSTAR on April 3, where he asked him to host a 5v5 CS:GO tournament – but not with esports athletes.

“Okay, I know like the entire community is up in flames right now, but how lit would it be if KEEMSTAR put together a 5v5 CS:GO tournament with all your favorite content creators?” Myth Tweeted.

Okay I know like the entire community is up in flames right now but how lit would it be if @KEEMSTAR put together a 5v5 csgo tournament with all your favorite content creators. 😀

Myth’s suggestion soon gained ample traction across the community, with the likes of popular Twitch streamer NICKMERCS and FaZe content creator Teeqo responding in favor of the event.

“Lit, I’m runnin’ it down mid with a P90,” NICKMERCS said of the idea, while Teeqo gave an enthusiastic “heart eyes” in reply.

While KEEMSTAR didn’t respond with any concrete details for the potential event, he made sure to retweet Myth’s Tweet on the subject, amping fans up for a possible tournament featuring the scene’s biggest content creators.

Commenters also suggested their favorite creators in the space for the tournament, tagging the likes of Twitch streamer and former CS:GO pro Michael ‘Shroud’ Grzesiek and Team Liquid Fortnite pro ‘Poach,’ among others.

Many fans of Myth’s idea suggested Michael ‘Shroud’ Grzesiek to be part of the tournament, as the massively popular Twitch streamer was once a CS:GO pro for team Cloud9.

While KEEMSTAR appeared to entertain the idea, it wouldn’t be the first esports tournament he’s held; in fact, KEEMSTAR’s ‘Friday Fortnite’ initiative was incredibly popular, before he took issue with Epic Games banning third-party tournaments from awarding prize pools greater than $10,000 in Summer 2018. 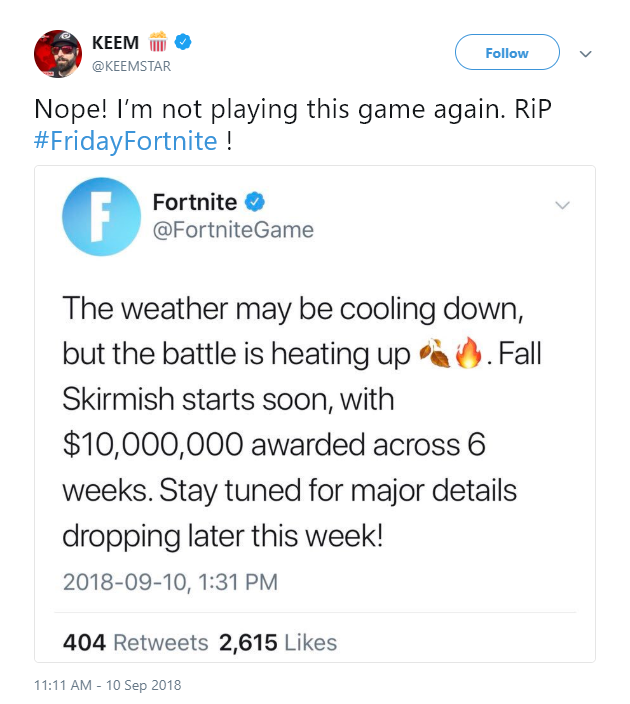 KEEMSTAR’s Friday Fortnite tournaments came to a halt, after Epic Games forbade any third-party tournaments from awarding over $10,000 in prize pools.

While Friday Fortnite may have come to a halt, KEEMSTAR hasn’t given up on tourneys altogether; he also acted as referee for MrBeast’s $200,000 YouTuber airsoft battle royale, which pitted 13 teams of three top YouTubers each against each other in a battle sponsored by Apex Legends.

KEEMSTAR even spoke on a potential ‘Minecraft Mondays’ survival event in a Tweet prior to Myth’s suggestion, jokingly shunning the idea in favor of a ‘Hunger Games’ tournament – although whether he meant a real-life rendition of the series or was merely referencing the website is still up in the air.