KEEMSTAR is Planning a Madden Tournament for Victims of Mass Shooting in Jacksonville, Florida - Dexerto
Entertainment

KEEMSTAR is Planning a Madden Tournament for Victims of Mass Shooting in Jacksonville, Florida

Drama Alert Host and popular YouTuber Daniel ‘KEEMSTAR’ Keem has announced that he plans to host a Madden NFL 19 tournament, with the proceeds going to the victims and the families of those involved in the fatal shooting at a Madden tournament in Jacksonville, Florida.

Taking to Twitter, Keem suggested that he would consider running an online Madden tournament, if he felt the demand was there.

The idea to host his own competition came in light of EA cancelling the three remaining Madden Classic qualifying events, that were scheduled to begin in September. 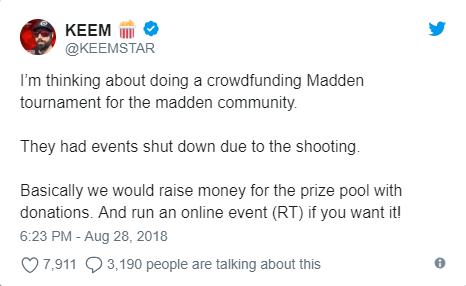 The 36-year-old American stated that the prize pool would be built through crowd-funding, and that half of the money raised would go directly to the families of those affected, saying;

Basically it would be set up that half goes to prize pool to help the Madden Community & half goes to the Victims of the shooting. Those that lost their life & those that were shot & survived. 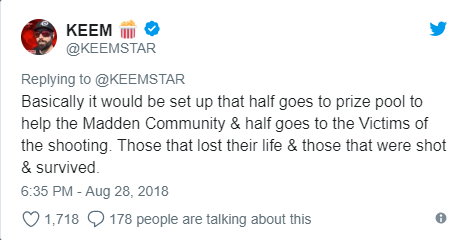 The fatal shooting took place on Sunday, August 26. Elijah Clayton and Taylor Robertson were both shot and killed, and multiple others were inured, during a Madden NFL 19 event at the GLHF Bar in Jacksonville, Florida.