James Charles has responded to claims of sexual harassment from male model Gage Gomez, who was seen holding hands with the YouTuber at the 2019 Coachella music festival – spurring an onslaught of questions from fans.

Charles posted a lengthy message to Twitter on May 4, where he addressed claims of sexual harassment as alleged by his Coachella date, male model Gage Gomez.

According to Charles, he and Gomez had talked for five months before his trip to the 2019 Coachella music festival, where the two “held hands” and “slept in the same bed.”

However, Charles vehemently denied any claims of pressuring Gomez into sexually compromising situations – a claim that Gomez made in a video on the topic prior to Charles’ Tweet.

“I told James I wasn’t interested in any of that,” Gomez said of Charles’ purported advances in the video. “…he was aware of how I felt about him, and basically still pursued this action.”

Gomez claimed that he was “blocked and unblocked” by Charles multiple times on social media throughout the duration of their relationship, alleging that James had gotten upset when he initially denied his invitation to Coachella.

Gomez went on to claim that he’d made it clear that he wasn’t interested in experimenting with his sexuality, which had allegedly upset Charles and his friends, who’d decided that Gage was “using” Charles for clout points. 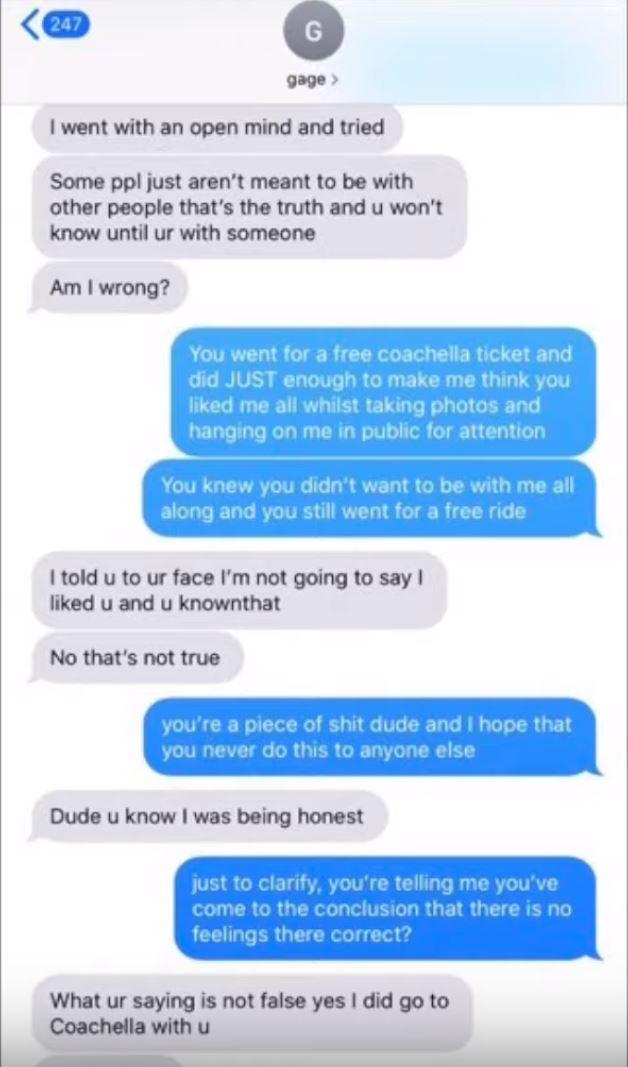 Alleged text messages between Gomez and Charles show a heated conversation, wherein Charles accused Gomez of faking being interested in him for attention.
500https://www.youtube.com/watch?v=CoQoaiGt-3g

Of course, this isn’t the end of the drama, by far; purported texts have since leaked between the two, which show Charles accusing Gomez of “faking” his sexuality for a chance at internet fame and a “free Coachella ticket.”

This wouldn’t be the first time Charles has Tweeted about Gomez, either – Charles even referred to Gomez as a “con-artist” in a now-deleted post, a claim that Gomez himself addressed in yet another video prior to the harassment scandal.

Drama between the couple surfaced after the two were seen holding hands at Coachella, who questioned the YouTuber about his “new relationship,” prompting the aforementioned Tweet by Charles who even stated that Gomez had played him “for months on end.”

Gomez has yet to respond to Charles’ statement responding to his harassment allegations.