Controversial YouTuber Jake Paul has revealed who he hopes to be next boxing opponent, as his beef with rapper Soulja Boy continues to escalate.

Paul uploaded an image to his Instagram story on February 20, in which he admitted that he hopes to fight KSI in the boxing ring.

“I want nothing more in life than for this to happen,” Paul said of the possibility, in response to TheBreadBatch’s post on the subject. 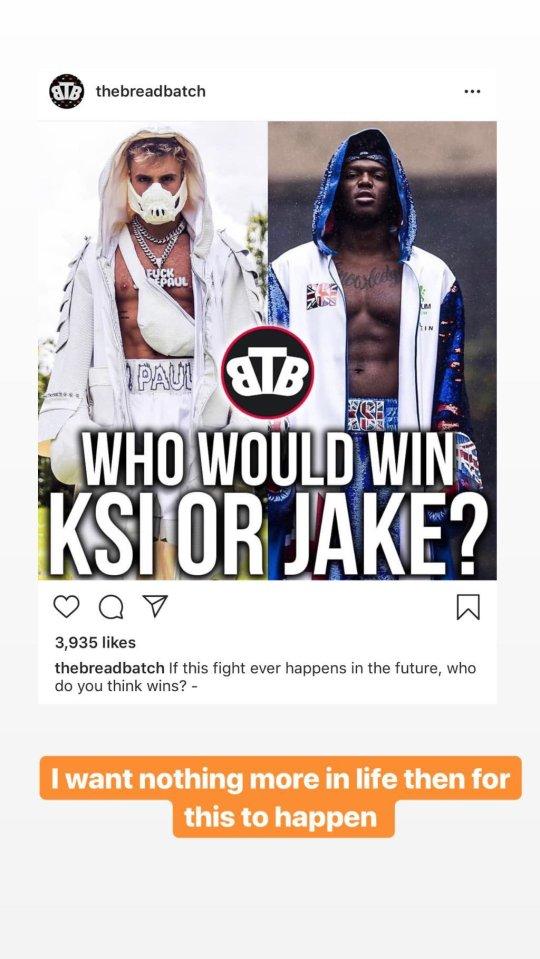 Jake Paul admitted that he “wants nothing more in life” than to face off against KSI in the boxing ring.
https://metro.co.uk/2019/02/21/jake-paul-wants-nothing-more-in-life-than-to-fight-ksi-as-he-prepares-for-soulja-boy-boxing-match-8697234/

A legitimate fight between the two YouTubers may not be out of the question, either; KSI likewise expressed a desire to fight Jake, should he defeat Logan Paul during their rematch in November 2019.

However, Paul’s potential fight with KSI may have to wait, as the YouTuber is currently beefing with rapper Soulja Boy over social media – and their fight could make it to the boxing ring.

Paul tagged Soulja in a tweet on February 1, where he challenged the rapper to a boxing match.

Soulja replied to Paul’s tweet in kind, writing, “Boy, I’ll knock you out,” in response.

The two went on to have a heated conversation over Instagram live, where Soulja put a whopping $20 million on their bout – to which Paul responded by expressing some doubt that the rapper actually had the cash in question.

Since then, Paul has agreed to match Soulja’s $20 million on their fight, with Soulja claiming that the match is definitely “happening” – as well as calling Paul a “bitch” in the process.