Popular YouTuber and makeup mogul James Charles announced his ‘SISTERS’ live tour during a video on April 23 – but some fans were not happy with the development.

Fans across the space sounded off after discovering that Charles was charging a whopping $500 for VIP packages, with some critics calling the pricing “extortion,” noting that the YouTuber’s relatively young fanbase might break the bank for a chance to meet him.

“You’re charging like you’re a mega star like Lady Gaga or Beyonce,” one critic wrote of the issue. “You do makeup on YouTube. You seem to be getting greedier every day. Sad.”

“The way James Charles is charging $500 for a VIP ticket knowing full well that the majority of his fans aren’t going to be able to afford it on their own but that his young, impressionable fans will still be whipped enough to break their bank accounts just for a hangout with him,” another said.

Charles later responded to the backlash in a series of now-deleted Tweets, claiming that it was “very expensive” to put on such a tour at the venues he’d scheduled.

OMG, your "tour" ticket prices are absurd. Your charging like your a mega star like lady gaga or beyonce. You do makeup on YouTube. You seem to be getting greedier every day. Sad. Used to like watching you. You even betrayed your BFF for cash. Some role model. Can't relate

james charles has the audacity to charge $250-$500 for vip tickets. which you know his 10-15 year old fans can’t afford on their own. kinda gross imo. sister extortion

“…please remember that there is a huge team and company working hard on this tour that have to be paid and have to make a profit as a business,” Charles explained.

However, Charles later deleted his Tweets on the matter, arguing that he “wasn’t in the mood to read negativity and rude comments.” 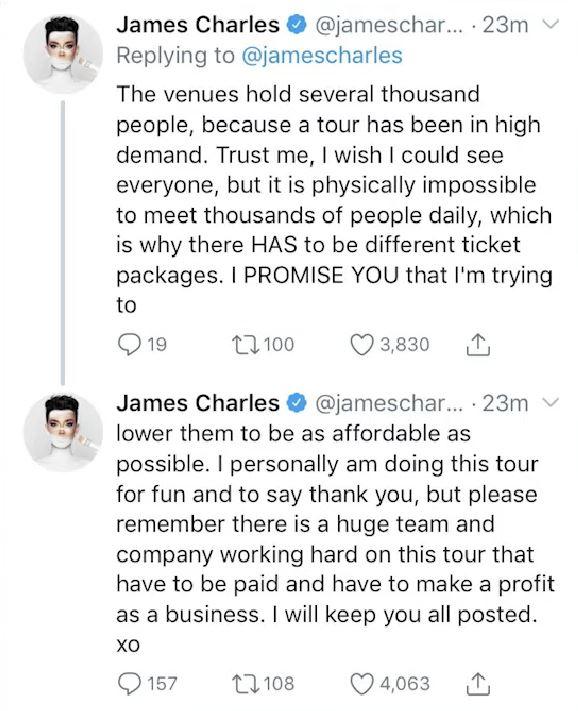 Charles initially explained his ticket pricing in a series of now-deleted Tweets, claiming that the high pricing was justified due to venue costs and other such expenses.
500https://www.youtube.com/watch?v=zj0Luz11KqU

Since then, Charles has given fans a major update as to ticket pricing, claiming that he wasn’t able to lower the prices of the tickets but instead included more services with the individual packages – including making meet-and-greets “more accessible.”

“… I begged my team to change prices, but because of contracts with the venues, it was not possible,” Charles explained. “Instead, I made sure meet and greet was more accessible and ensured that the highest ticket was worth the price.”

to clarify, i begged my team to change prices but because of contracts with the venues, it was not possible. instead, i made sure meet & greet was more accessible and ensured that the highest ticket was worth the price. i'm sorry i can't make everyone happy, i'm trying my best.

Charles’ most expensive option, the ‘Sister VIP,’ includes a catered pre-show hangout Q&A session with James, a goodie bag worth over $250, and the chance to have their eye makeup done on stage, among other such benefits. 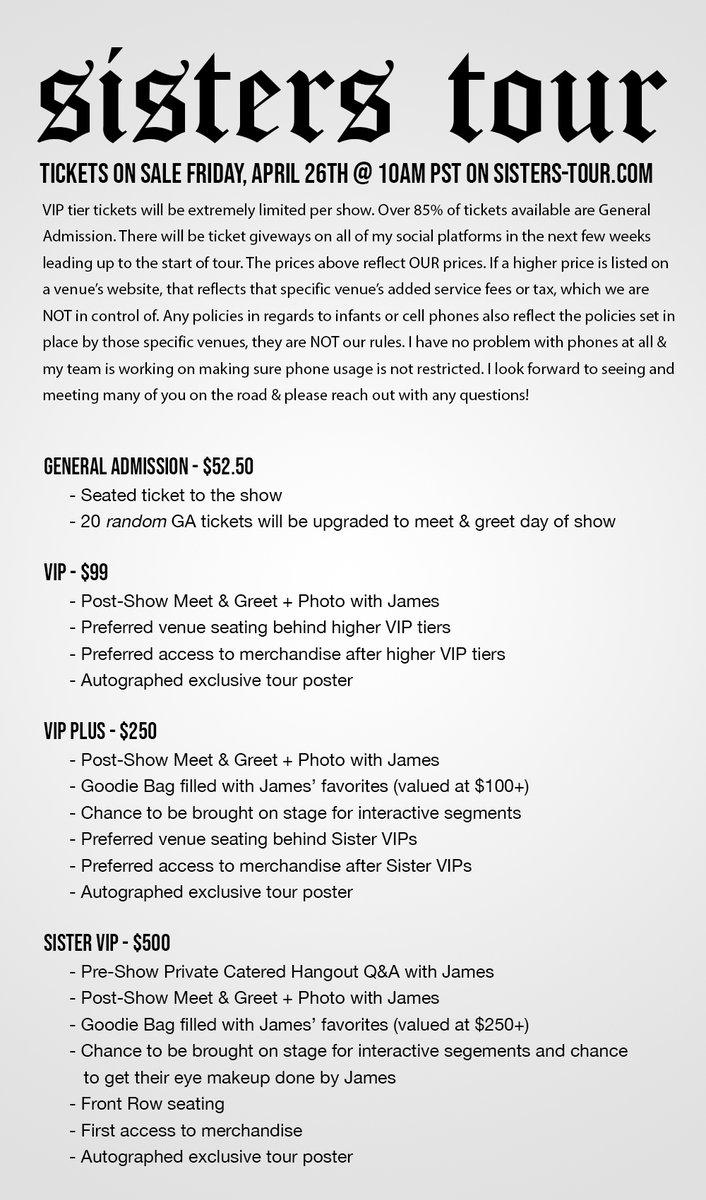 James Charles’ ‘SISTERS’ Tour will include four tiers of guest experiences, including a $500 VIP package that allows some attendees the chance at having their makeup done on stage.
500https://twitter.com/jamescharles/status/1121548587865792512?s=20

Charles’s tour encompasses 24 cities across the United States, with tickets going on sale Friday, April 26 at 10 AM PST.