H3H3 Productions’ Ethan Klein returned to YouTube on September 16 after a three month break, describing his battle with depression, anxiety and partner Hila losing her father to cancer.

The pair last uploaded in June, before making a return a week ago with a video promoting their new mobile game, H3H3 Ball Rider. The video received a lot of negative feedback from fans, who felt H3H3 had given up on YouTube and instead were cashing out.

Klein posted on Twitter to respond to some of the backlash, explaining that it had been in the works for over a year, and although it wasn’t the best timing, he wasn’t going to put it off. 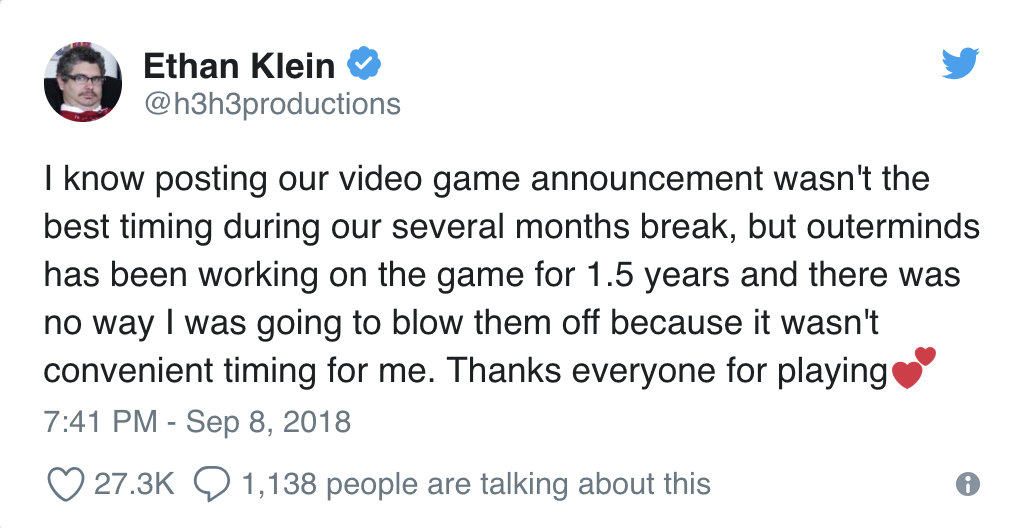 In their return video, he starts by referring to the mobile game video, saying “It’s me and Hila here, not in a video game ad, but in a real video,” before going on to explain their YouTube hiatus.

“The past three months, and specifically the last year, has probably been the hardest of our lives. It’s just been a string of really difficult to handle events, that I think really just took a toll on us. […] I have just accepted that I am actually depressed. Confronting that was hard, because I always felt like it was a weakness.”

Klein also revealed that Hila’s father had passed away after losing a fight with cancer, and so the two were apart as Hila went to Israel to visit family.

Ethan reitarates that the launch of the video game was badly timed, and that perhaps they should have uploaded an update video before they uploaded the advert for the game.

Both Ethan and Hila hope to get back to their regular content soon, and aim to remind people why they enjoyed watching them before.

Throughout their time away from regular uploads, the H3H3 podcast continued and has now grown so much that some people only recognize them from the podcast itself, Ethan explains. Before the video ends, Ethan says they hope to have a new video up next week.