The Fortnite team over at Epic Games have released the second set of duos who’ll be competing at their Pro-AM competition at E3 in June.

The battle royale shooter has become one of the most popular games in the world after being launched in September 2017, and the developers have now set their sights on making it in the esports world.

Epic have promised that they’ll invest over $100,000,000 in prize money for the game, but have yet to go into detail about how the season will work.

As a prelude to the competitive season, there will be a Fortnite Battle Royale tournament held at E3 in June featuring a host of professional gamers and streamers teaming up with actors, musicians, athletes, and models.

Each duo will feature a professional streamer or player alongside a celebrity with $3,000,000 being donated to charity in the process. That $3m doesn’t come from the $100m promised for esports events.

The first set of names released included the likes of Twitch’s most followed streamer, Ninja teaming up with EDM DJ, Marshmello.

On May 25th the second set of duos were released by the official Fortnite Twitter account and the names don’t get any less popular.

You can view the full list of duos below. 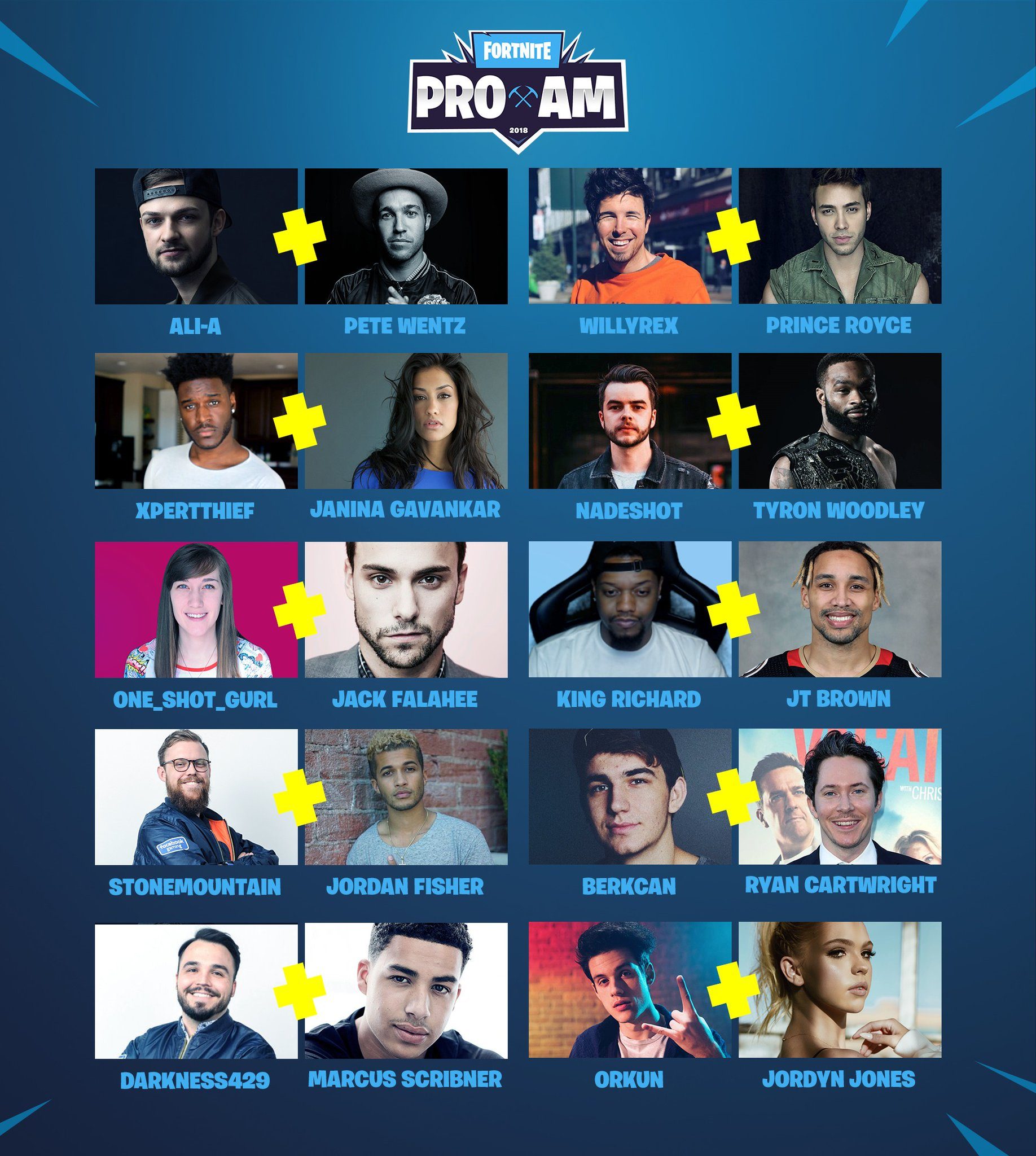 The Fortnite community has reached new heights in 2018 and it’s because of you, the fans. All of our players, partners and friends have helped make Fortnite so awesome this year… it’s time to celebrate!

Where are we dropping?
Downtown Los Angeles! The Battle Bus is en-route to E3 2018 and the whole squad is coming. Join us at the Fortnite booth 2723 in the South Hall of the LA Convention Center, or tune-in to the 100-player Pro-Am featuring your favorite Fortnite pros and celebrities.

50 pros and 50 celebrities pair up to earn the ultimate Victory Royale — $3,000,000 in charity prize money that they will donate to their charity of choice. The winning duo will receive $1,000,000 in charity to split! (This prize money is not included in the $100,000,000 planned for Fortnite Esports. Read the Esports announcement here)

…and many more live on the big stage! We’re announcing more duo pairs over the next couple weeks leading into E3. Many will Take the L, one team will Rocket Ride to Victory.This epic showdown will be streamed live starting at 3:30 PM PST on Tuesday, June 12th. Tune-in for a chance to win exclusive swag, just like the pros:

Tickets for the event will be available for purchase via an email link sent to players for $10 located in the LA area. These email invites will be sent in waves until all 3,000 tickets have been sold. If you are lucky enough to snag a ticket, you’ll not only get to watch the Pro-Am live, but you’ll also get an exclusive swag bag and some free bites to eat straight from the Durrr Burger!