He revealed on Twitter that numerous subs had unsubscribed from his channel when he was just shy of the one million mark.

Due to this development, Lupo’s editor uploaded the announcement video with a slight adjustment, titling it, “Thank you for one million (ish) subscribers on YouTube!”

Lupo seemed to take the trolling in good spirits, expressing a love for his editor due to his response to the trolls’ shenanigans.

“People unsubbed from the YouTube channel to bring the count below a million to troll, so my editor updated the 1mil video title to ‘Thank you for 1 million (ish) Subscribers on YouTube!’ I am dying, hahahaha. I freakin’ love you @SteveGives” 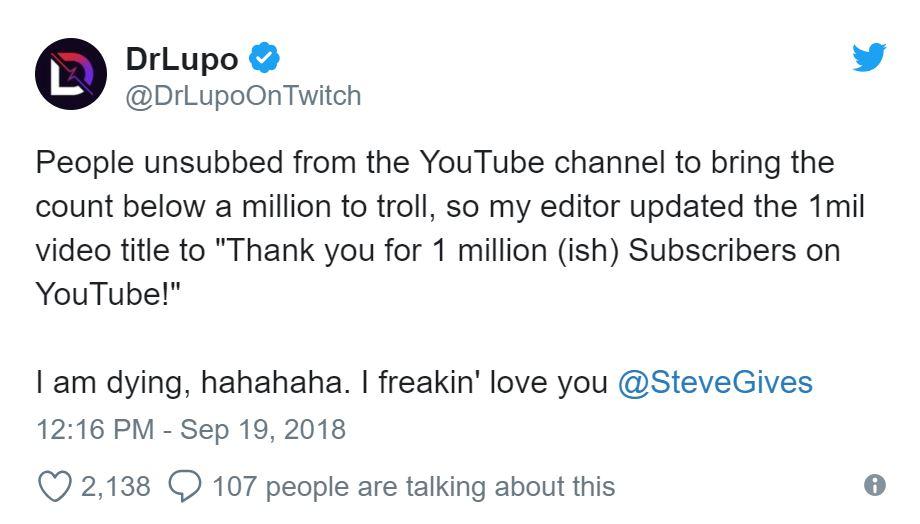 The video in question provided an emotional look into Lupo’s career on the platform, showcasing classic clips from his streams with other notable gaming personalities. The clips include moments with the likes of Ninja, Lil Dickens, Summit1g, and more.

Dr Lupo is a notable streamer from the Midwest, who got his start playing Destiny and now mainly streams Fortnite Battle Royale, along with a variety of other games.

While his YouTube subscriber count is impressive, now having reached 1,000,505, his Twitch stream has even more traffic, with over 2,400,000 followers on the platform.