Top Fortnite Twitch streamer Brett ‘Dakotaz‘ Hoffman told a ‘fan’ exactly where to send themselves after receiving a donation message accusing him of ‘criminal’ behavior.

Best known for his Fortnite gameplay, Dakotaz has amassed over three million followers on his channel, and with such levels of popularity, encounters with ‘trolls’ are inevitable.

On March 12, a viewer donated 500 ‘bits’ (around $5), and left a message which accused Dakotaz of promoting Apex Legends, encouraging his viewers to play it, and then ditching the game to go back to Fortnite. 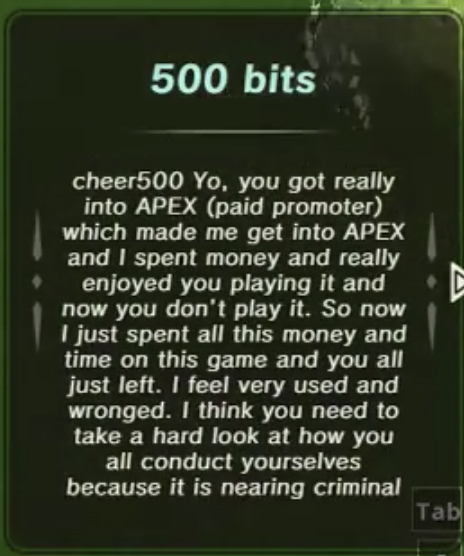 A disgruntled viewer sent Dakotaz an unexpected message in a donation.
400

The message explained “I just spent all this money and time on [Apex Legends] and you all just left. I feel very used and wronged. I think you need to take a hard look at how you all conduct yourselves because it is nearing criminal.”

It’s hard to tell if this message was entirely tongue-in-cheek, or if it was a genuine complaint, but Dakotaz quickly fired back.

“First off, go screw yourself, ok, that we’re just going to get out of the way. […] Second, I never got paid to play Apex, I played it on my own free will, so stuff it dude, go cry me a river. You’re a little baby. An entitled little shit you are.”

He then tells the donator to get out of his channel and move on to the next stream. After all, with tens of thousands of viewers, losing one won’t hurt.

Dakotaz isn’t the first streamer to receive negative remarks for doing paid promotions of games (even though he didn’t actually do a paid promotion for Apex Legends), as others like shroud have spoken up about the issue.

More game publishers are recognizing the influence of big name streamers, but no one but players themselves can be blamed for their purchase decisions.