Twitch streamer JasonR denies any wrongdoing in face of claims that he banned subscribers based on gender - Dexerto
CS:GO

Popular CS:GO streamer Jason ‘JasonR’ Ruchelski has denied any wrongdoing after having been accused of banning female viewers and subscribers solely because of their gender.

On October 16, one of his female viewers, who goes by missPerceived on Twitch, tweeted out about having been unreasonably banned from the channel.

She included her full conversation with one of the channel moderators, ‘MyStumpyLegs,’ who apparently claimed that anyone with an obvious female Twitch username gets banned. 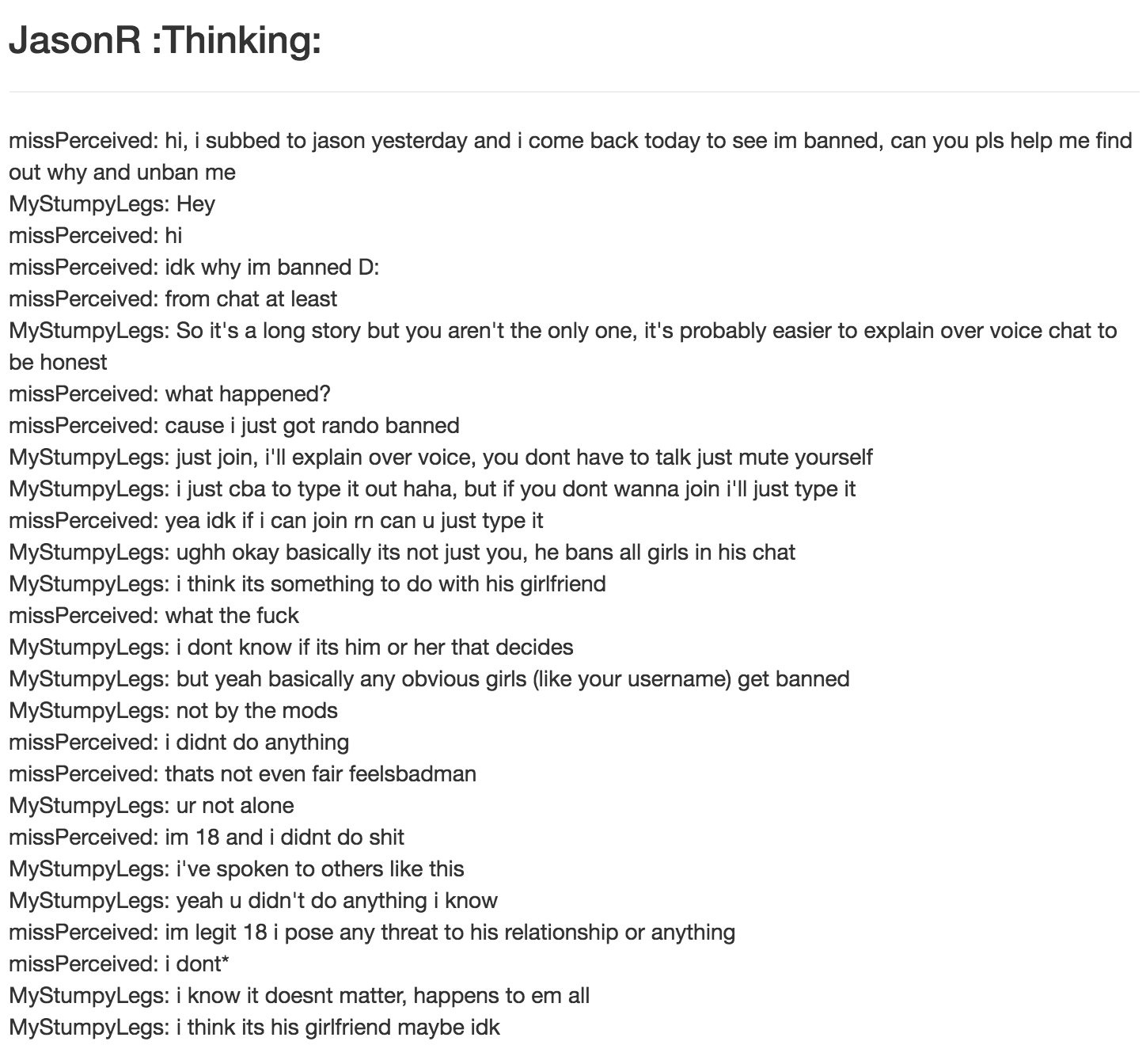 “Okay basically it’s not just you, he bans all girls in his chat,” the mod said in the conversation,” Basically any obvious girls (like your username) get banned.”

Shortly thereafter, a female Twitch viewer named ‘recklessanna’ shared a screenshot of her activity in JasonR’s chat back in June, which shows her getting banned by his girlfriend, then getting unbanned by a mod, before getting banned by JasonR himself. 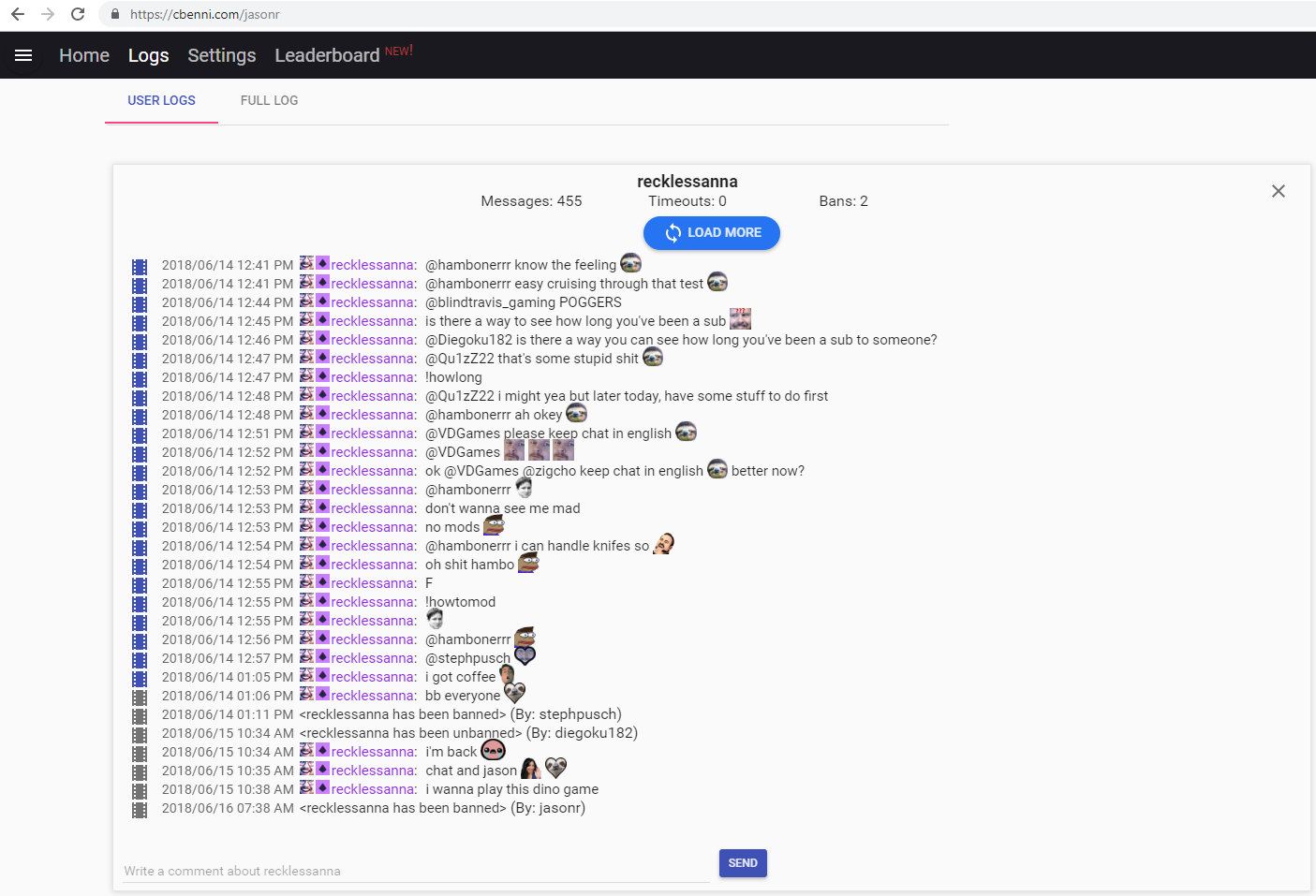 Since then, a user named ‘Jojopigs,’ who claims to be one of the top most active chatters in JasonR’s channel, has said in a Reddit comment that the allegations are true. Please note, there is no way to verify the claims at this time.

“I have since stopped watching and supporting him after he banned the first 20 month sub for being female,” Jojopigs said. “It’s been a slippery slope since then, including his 30 day ban for stating ‘all girls on Twitch are hoes.'”

The incident referred to above occurred when JasonR said “I fucking ban these hoes dude, people need to understand that every single girl on Twitch are little fucking hoes.”

He had his channel subsequently suspended for the incident shown below.

Following the Reddit post blowing up overnight, JasonR denied any he’d done anything wrong during the start of his stream on October 17.

During his denials that he’d done anything wrong, and despite the stream title on October 17 claiming he bans everyone equally, he did admit that he stands by what he said that got him banned previously.

His claims of innocence have also been contradicted by someone who is claiming to be a mod in his channel, and alleges that JasonR and his girlfriend had been at this sort of practice for close to six months.

“I’m a mod in his channel and have been following him for 2 years. It’s all real, he’s been doing this for about six months now,” the user claimed. “I’ve witnessed at least five bans so far, he bans everyone with a girl’s nickname, even though they’ve done nothing wrong.”

The user even alluded to when JasonR and his girlfriend allegedly went after a Twitch administrator named ‘Sintilla,’ even providing the chat logs for the incident that took place in late August.

If true, this directly contradicts another of JasonR’s statements on October 17, which claimed that his girlfriend doesn’t go on Twitch, look at chat or ban people.

Despite the controversy surrounding these fervent claims and accusations, according to Twitch guidelines, JasonR is well within his rights to ban people from his chat solely on the basis of their gender.

We have reached out to JasonR regarding the situation, but at the time of writing, have received no response.