With the latest streaming giant Michael ‘shroud’ Grziek leaving Twitch for Mixer, everyone is wondering which big personality will jump ship next, and some cryptic tweets have sparked fan speculation that Turner ‘Tfue’ Tenney could be next.

Shroud shook up the streaming world when the former CSGO pro announced he was leaving Twitch for their competitor Mixer on October 24, following in the footsteps of Tyler ‘Ninja’ Blevins who made the same deal three months prior.

Now all eyes are on the remaining top streamers on Twitch, as speculation rages as to who could be the next one to make the move to the Microsoft platform. After some cryptic tweets, fans think it could be Fortnite star Tfue.

The Fortnite star is the biggest channel on Twitch, with over 7 million followers.
[ad name=”article2″]

Fans think Tfue could be next to join Mixer

Following shroud’s surprise announcement that he had joined Mixer, Tfue sent his fans into a frenzy when he asked who would be the next streamer to jump ship on his Twitter account on October 27. “Ninja Shroud now Goth! Who’s next?” he said.

The Twitch star’s tweet fueled speculation among his fan base as to whether it was a sign that he was willing to deal with Microsoft, or possibly even a tease that he would be the next one to join the streaming platform. Even Fortnite pro Jack ‘CouRage’ Dunlop joined in the speculation and replied “Tfue!” 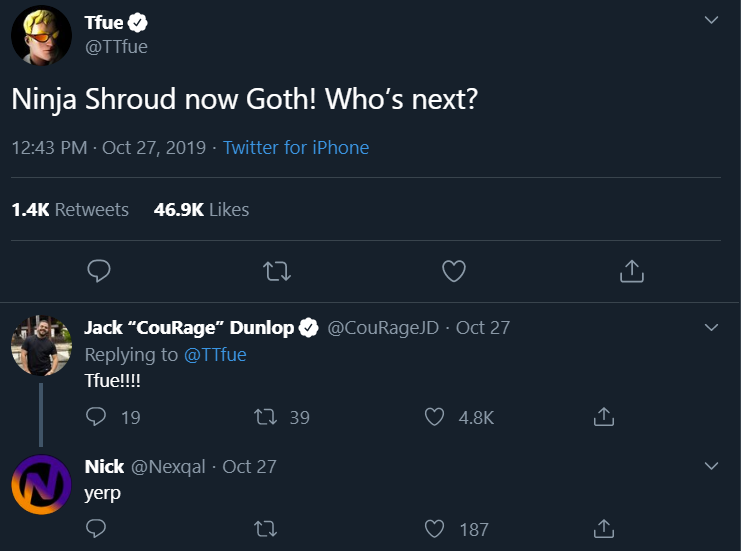 The Fortnite pro sent his fans into a frenzy with his tweet on October 27.
[ad name=”article3″]

Adding fuel to the fire, Mixer’s own Twitter account replied to the Twitch star, and posted a gif of the ‘thinking face’ emoji.

This only furthered the conspiracy theories and speculation that he might be in talks with Microsoft to join their streaming platform.

CouRage wasn’t the only prominent figure to speculate – fellow streaming giant Brett ‘dakotaz’ Hoffman also replied to the Twitter thread with a gif showing a man holding wads of cash up to his face in the shape of a phone.

“HELLO? IS TFUE THERE WE GOTTA TALK,” the tweet said.

HELLO? IS TFUE THERE WE GOTTA TALK pic.twitter.com/8ki5XlOwmT

While there have been no official signs that Tfue is in talks with Microsoft to join their platform, the social media account for Mixer has not been shy to tease the idea, replying to streamers with cryptic tweets.

Only time will tell if Tfue will leave Twitch, but as of the time of writing this article, he is the most popular channel on the platform with over 7 million followers.