Conor McGregor has announced his retirement from “Mixed Martial Arts.” The former UFC two-weight world champion took to Twitter to announce the news to his 7.5 million followers.

Despite the nature of his tweet, many will be skeptical as to whether the Irish megastar has actually retired from MMA. As recently as March 23, UFC President Dana White, had been openly talking about McGregor’s return to the Octagon.

There had been talks of a summer return for the Notorious one against opponents such as Anthony Pettis, Donald Cerrone and perhaps most excitingly former foe Nate Diaz. This suggests his retirement announcement could be in response to failed negotiations for his next fight.

Hey guys quick announcement, I’ve decided to retire from the sport formally known as “Mixed Martial Art” today.
I wish all my old colleagues well going forward in competition.
I now join my former partners on this venture, already in retirement.
Proper Pina Coladas on me fellas!

McGregor had previously announced his retirement in a now infamous tweet stating, “I have decided to retire young. Thanks for the cheese. Catch ya’s later.” That tweet stemming from April 2016, got an astounding 150 thousand retweets and 181 thousand likes.

He squared off against Nate Diaz just four months later at UFC 202 and provided arguably one of his finest performances on route to a majority decision win. This was a rematch of his first loss in the UFC which Diaz won by submission at UFC 196. 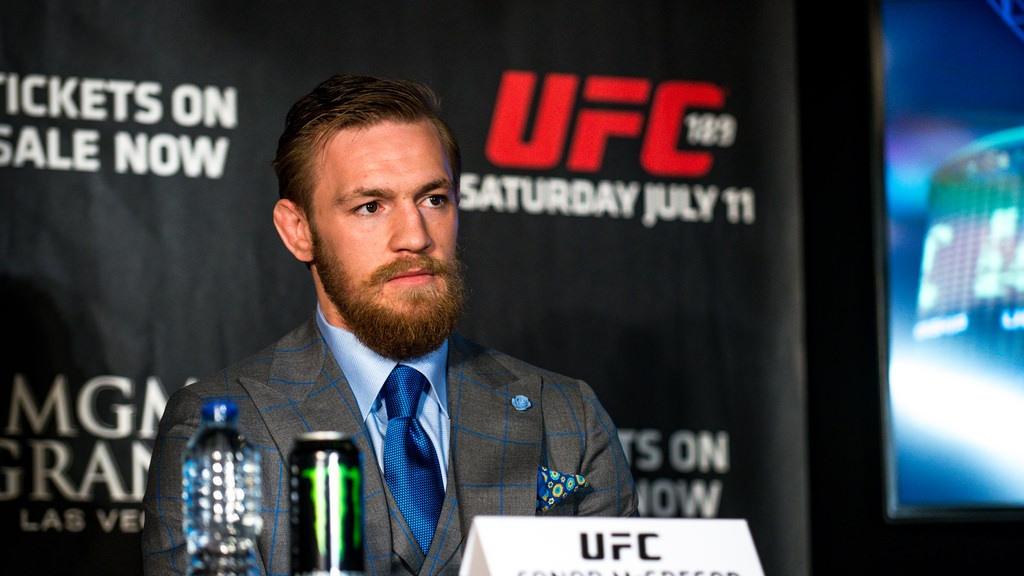 Unsurprisingly, many on Twitter aren’t convinced he has retired either. Jack “CouRage” Dunlop responded with a blunt, “Wait…”. Whether this was in reference to his previous retirement tweet or whether he just really wants McGregor to fight again is unclear.

Elsewhere, TimTheTatMan responded with an iconic GIF which either shows he is shocked at the news or like others simply doesn’t believe it.

NICKMERCS was also surprised, saying “Wait what.” One of the replies to the Fortnite player said “He learnt strategies from Floyd”, a reference to Floyd Mayweather’s numerous retirements.

Nadeshot replied “Sold Proper Twelve already?! Congrats goat.” Whether Nadeshot is buying his retirement is unclear but his tweet references McGregor’s already hugely successful whisky brand, Proper Twelve. Among other projects of his, it is rumored McGregor can already retire off the Proper Twelve brand alone.

Another interesting reply, outside of the gaming world, was from WWE Superstar Finn Balor. The fellow Irishman replied, “See you at ‘mania brother.” While it is unlikely McGregor will be at Wrestlemania, let alone having some type of role at the event, this tweet will no doubt drum up a lot of excitement before WWE’s biggest event of the year.

The overwhelming sentiment from McGregor’s tweet seems to be it is simply a negotiations ploy. One personality that was more blunt about it was YouTuber and podcaster True Geordie who said, “this isn’t true news.”

McGregor retiring now is like when Jay Z ‘retired’ after the black album. Just something to make headlines.

Given his unfinished business with Khabib Nurmagomedov and an array other fight options, it is hard to believe his retirement tweet is final. It will be interesting to see how this story develops over the coming days and don’t be surprised to see McGregor back in the UFC this summer.