Twitch and YouTube streamer Daniel Desmond ‘Etika’ Amofah posted several messages on his Twitter account on Tuesday, April 16, suggesting he planned on killing himself, raising concerns for his safety.

Etika, who has had a controversial past on Twitch, was banned in late 2018 for using homphobic language and moved to YouTube streaming and content creation.

In October, Etika similarly scared his fanbase after posting a cryptic message which some believed was hinting at suicide, but soon after reassured fans that he was fine, stating “You know I like to be overdramatic.”

He openly struggled with mental health issues in January 2019, stating on Twitter: “What happened to me was not a mental breakdown. It was far scarier than that. There’s things in this universe that we as humans in our current state CANNOT comprehend or begin to understand/explain. When psychedelics are finally researched. That’s when we will discover who we are.”

On April 16, a number of Tweets posted by Etika had fans worried again, writing “Savonarola! I’m going to kill myself! You lot certainly have already. Shame on you all, silly humans.”

Etika continued to make a number of cryptic tweets in the following hours, including some which referenced former head of Nintendo America, Reggie Fils-Aime. Etika wrote ‘Rest in peace’, although Fils-Aime is still alive and well, having retired from Nintendo earlier this year.

Etika posted a final tweet before going silent on Twitter, which was most concerning of all for his 300,000+ followers.

He explicitly stated that he was going to shoot himself, even explaining where he had acquired a weapon. 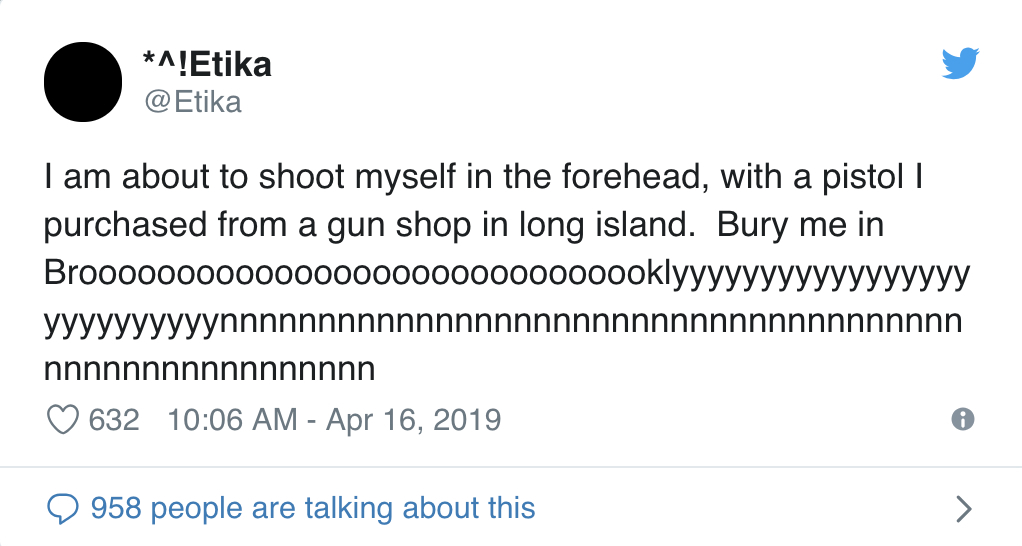 Ten mintues after this Tweet was posted, fellow streamer, Alice Pika, who is close to Etika, claims that Police arrived at his home and he was taken to hospital. He is apparently physically unharmed.

He's being sent to the hospital, I'm not saying where. He's physically UNHARMED. I'm letting his loved ones know. Pray for him.

Fellow streamers and community members also reached out to Etika, pleading with him to stay safe, including ICE_POSEIDON and YouTuber TheAnimeMan.

Please dont man. If this Is really you, trust me people love u and you're an asset to this world

If you are from outside the United States, you can use the following numbers: