Popular Twitch streamer Alinity Divine stirred up controversy after throwing her pet cat over her head during a live broadcast, inciting outrage across the net over what many critics viewed as animal abuse – but the hate wasn’t merely limited to the online world.

While Alinity took an eight-day break from streaming following the scandal, she returned to the platform following investigation by the Saskatoon SPCA, who cleared her of all charges.

Despite her seemingly triumphant return, she admitted that the scandal brought out a frightening side to her critics – and even claimed that she had been physically stalked due to the drama.

Alinity opened up about the incident during her first stream since her cat-tossing clip went viral, explaining that she’d been followed by people in her neighborhood who recognized her.

“People have been, umm, showing up to my house,” she began. “…there were a few people in my neighborhood that I guess know who I am and have seen me walking my dog, and have followed me to my house.”

Unsurprisingly, the streamer was disturbed by this development, calling the stalking “not cool” and claiming that she keeps a baseball bat under her bed in preparation for possible home invasions.

This wouldn’t be the first time Alinity has spoken out about being followed, either: the streamer Tweeted out a similar story on July 21, begging stalkers to respect her privacy in light of the drama.

Please stop coming to my house and asking my neighbours where I am. Its actually really scary

“Please stop coming to my house and asking my neighbours where I am,” she wrote. “It’s actually really scary.”

While the SPCA claimed that Alinity “showed remorse” for tossing her cat and harbored “no malicious intent” toward the animal, critics continue to lash out across the net, as Twitch has yet to dole out a punishment following the scandal. 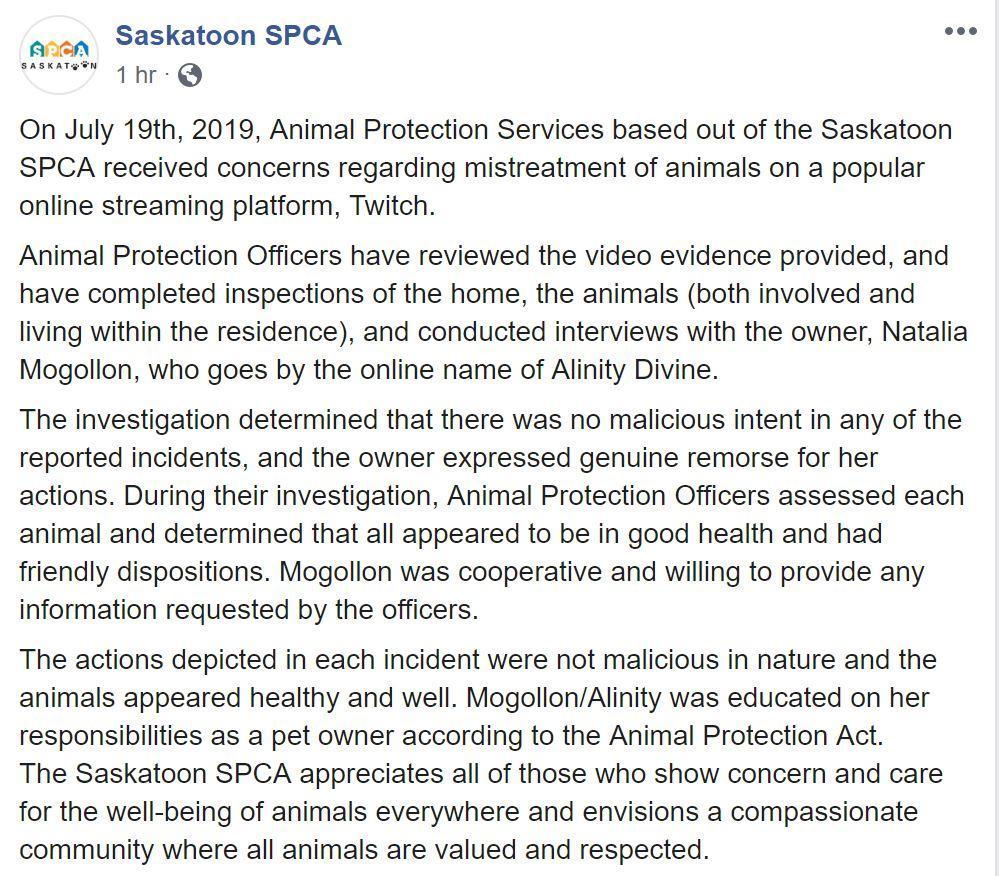 The Saskatoon SPCA released an official statement regarding their investigation into Alinity’s home on July 26 – and critics were not happy about the results.
600[ad name=”article5″]

Popular YouTuber Ethan Klein even claimed that Twitch gives “special treatment” to bigger streamers on the platform, alleging that his contact at the company told him so over a phone call during his time as a partnered streamer.

Despite speculation, Alinity continues to stream on the site – although people clearly aren’t happy about it, and are taking their frustration to the real world in a frightening display of aggression.