A story of revenge and hurt feelings highlighted last year’s Dota 2 International, and its legacy has certainly not been forgotten this year.

During last year’s magical run by OG at the Dota 2 International in Vancouver, the match most fans were looking forward to wasn’t the eventual grand finals, but the one between OG and Evil Geniuses – an upper bracket grudge match that was just simmering with beef.

Prior to last year’s International, OG were all set to go the China SuperMajor in May, when Gustav “s4” Magnusson and Tal “Fly” Aizik both unexpectedly left OG to join Evil Geniuses. As a result, OG were forced to skip the SuperMajor and relinquish their spot at the upcoming International.

Most affected by this departure was Johan “N0tail” Sundstein, who had been good friends and teammates with Fly for nearly a decade, and he went radio silent during the runup to TI.

Because they had to relinquish their TI spot, OG had to play through open qualifiers with a former player and with an unproven talent, making their eventual Cinderella main event run even more magical.

OG would end up beating Evil Geniuses 2-1 in the upper bracket on their way to winning the whole tournament, and when Fly saw N0tail for the first time, he was met with a piercing, vicious stare.

One year later, and after a flight across the Pacific to Shanghai, the impact of this moment was felt throughout the stadium as both teams met again in the exact same spot in the bracket as last year. And both teams acknowledged the moment in style.

Evil Geniuses paid tribute to the beef as well during their ridiculous skit showcasing how “American” the North American roster truly is. The skit made light of a different moment from last year’s TI when former OG player s4 shoulder-checked n0tail during an interview.

With the beef still sizzling in our minds, the two teams clashed at this year’s tournament, and just like last year, OG prevailed 2-1. There was a handshake between n0tail and Fly that featured no malice or staring, and the two even shared a nice moment during the game, as caught by reddit user “karmaisback”: 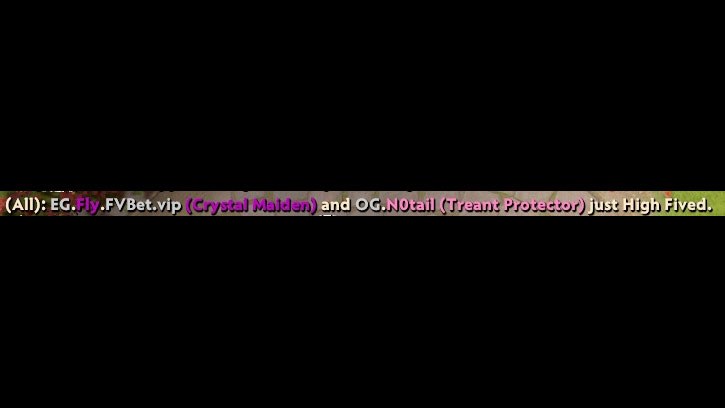 It looks like the hatchet has finally been buried between these two. But at least we’ve gotten some high quality Dota series out of the rivalry, and got to sample some tasty beef.