w0xic Unable to Secure Visa Ahead of Dreamhack Masters

Dreamhack Masters is quickly approaching on August 29th, and w0xic is unable to attend – due to circumstances completely out of his control.

W0xic posted a Twitlonger post on August 27th that revealed a sticky situation in regards to his passport and Visa. Hailing from Turkey, w0xic needed to procure a passport in order to travel to Stockholm, Sweden, home to 2018’s Dreamhack Masters event and CS:GO’s Major CORSAIR tournament.

However, it didn’t seem that competing in CORSAIR would be a reality for w0xic.

He stated that he had permission from the Ukraine embassy to apply for Ukrainian Visas to all countries. Having already procured a Hungarian Visa without much trouble before, he figured there wouldn’t be much ado in this instance.

While the embassy told him he’d be able to pick up his Visa on August 22nd, it wasn’t ready by this time – and staff was more than a little pushy about his request.

“One guy was sitting behind the window and my manager tried to explain him how important it is and that it is an emergency etc. He just told me and my manager after that, we’re not working right now. And we asked to him can we come tomorrow early and can we take the passport? They just said ‘WE’RE NOT WORKING’ again.”

W0xic posted another Tweet early on August 28th, revealing that the embassy gave him a last-minute passport – but no Visa.

“1 hours before i got message from Embassy;Your processed passport has been delivered to Application Center and ready for collection.I was too happy and i went there,they gave my passport back without visa.1 year 5 tournaments and 2 Sept.also my birthday😶 i lost my hope about cs” 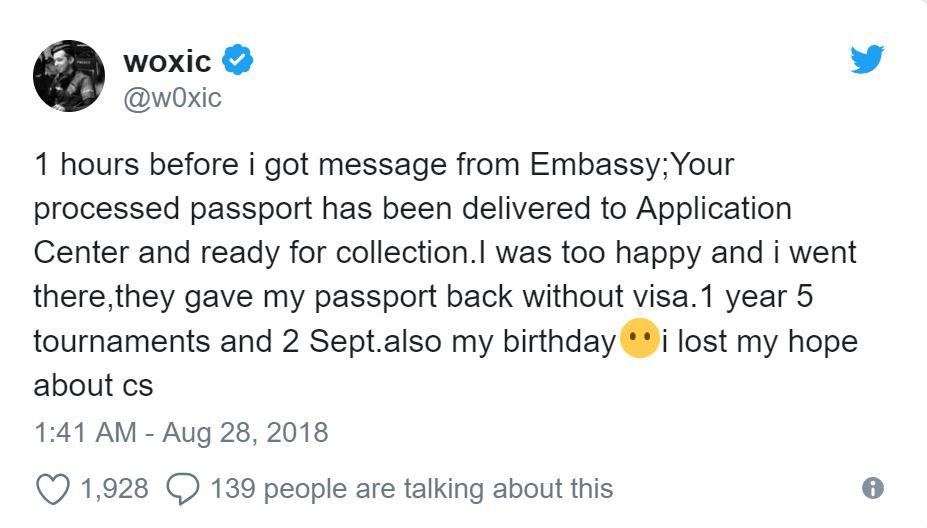 With a passport but no Visa, it looks as though w0xic won’t be competing in Dreamhack Masters’ CORSAIR tournament.