Both North and G2 Esports found themselves on the brink of elimination at the ESL Pro League Finals, sitting in the lower bracket of their group stage. Surprisingly, both top-tier teams were sent packing by a surprising opponent in ATK. But who is ATK?

In esports, teams sometimes only need one tournament to make a strong case for why they should be in the upper echelon. For North and G2, their aspirations of proving to the world that they should be championship contenders right now fell flat, at the hands of a relatively unknown roster trying to leave their own impression.

Both ATK and North found themselves in the lower bracket of their group early, following losses to mousesports and Team Liquid respectively. But ATK would earn another shot at mousesports by first dispatching North in only two maps.

For ATK, they faced adversity right after their success; getting blasted by G2 in game one on Vertigo, losing 16-4 as they couldn’t stop the G2 T-side and couldn’t even get a bomb plant down in the second half.

They found themselves trailing on Train as well, but on the brink of elimination, rallied from a 12-5 deficit with a magnificent T-side half, taking 11 of the final 12 rounds to steal Train away 16-13. With that momentum, they blew away G2 on Inferno in a reverse of the first map, with ATK dominating on both sides, and the same trio stepping up against G2 as they did against North. 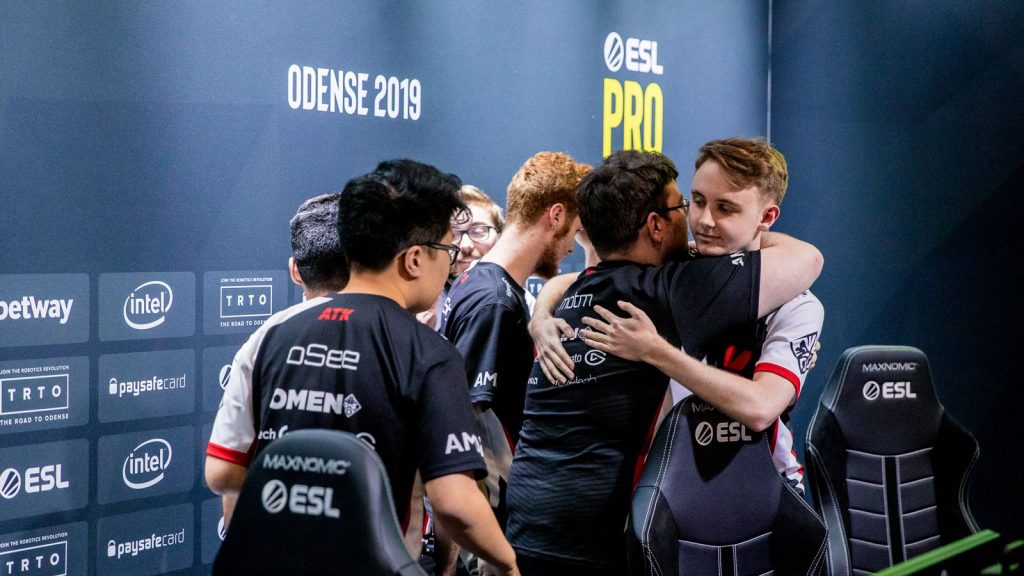 ATK celebrate their upset over G2

Of the original former Denial roster, only Sonic and Johnny ‘JT’ Theodosiou remain, and Sonic only recently re-joined in September after leaving for Envy in June. ATK has since supplemented the South African duo with a trio of promising American talent in motm, floppy, and Joshua ‘oSee’ Ohm.

They came excruciatingly close to qualifying for the ECS Season 8 finals in just their first couple of months together. They won one of the ECS North American series, but unfortunately not the one that rewarded an automatic Finals spot. During that ECS run, they impressed with a win over MIBR and an incredibly close series against Team Liquid.

No matter how ATK does in their rematch against mousesports, they’ve already guaranteed their largest cash prize at a single event ever, and can guarantee a spot at WESG in China if they win just one best-of-three against Canadian team LiViD Gaming on December 7. The players are excited about the outlook of the team.

BEAT @G2esports 2-1 IN EPL FINALS. GG PROUD OF THE PROGRESS AND FORTITUDE THE TEAM HAS BEEN SHOWING

For North, they’ll try to end 2019 with some momentum as they aim to qualify for WESG themselves and compete at DreamHack Open Sevilla. It’s been a string of poor results for them since the Berlin major.

G2 are still adjusting to their new additions from CR4ZY, and will meet a familiar face at cs_summit 5 when they see Nathan ‘NBK-’ Schmitt and the new OG roster.