ESL India and Nodwin Gaming have released a final statement on the OpTic India cheating scandal and confirmed that they will be hosting a rematch to decide the new winners of the Premiership Fall Finals.

OpTic India’s Nikhil ‘forsaken’ Kumawat was caught cheating at the eXTREMESLAND 2018 LAN on October 19 and was immediately disqualified from the event along with his team, all of whom have now been dropped by OpTic Gaming.

However, the controversy didn’t end there as ESL India conducted their own investigation and found that forsaken had also been using the hack during the Fall Premiership Finals, an event that OpTic India had won.

Now the event organizers have released a final statement on the matter, beginning with an apology to the community: “We would like to apologize that cheating could even happen at this competition.”

They also confirmed that Kumawat will be banned from all ESL and Nodwin Gaming competitions in accordance with the recent ruling from the Esports Integrity Coalition (ESIC). 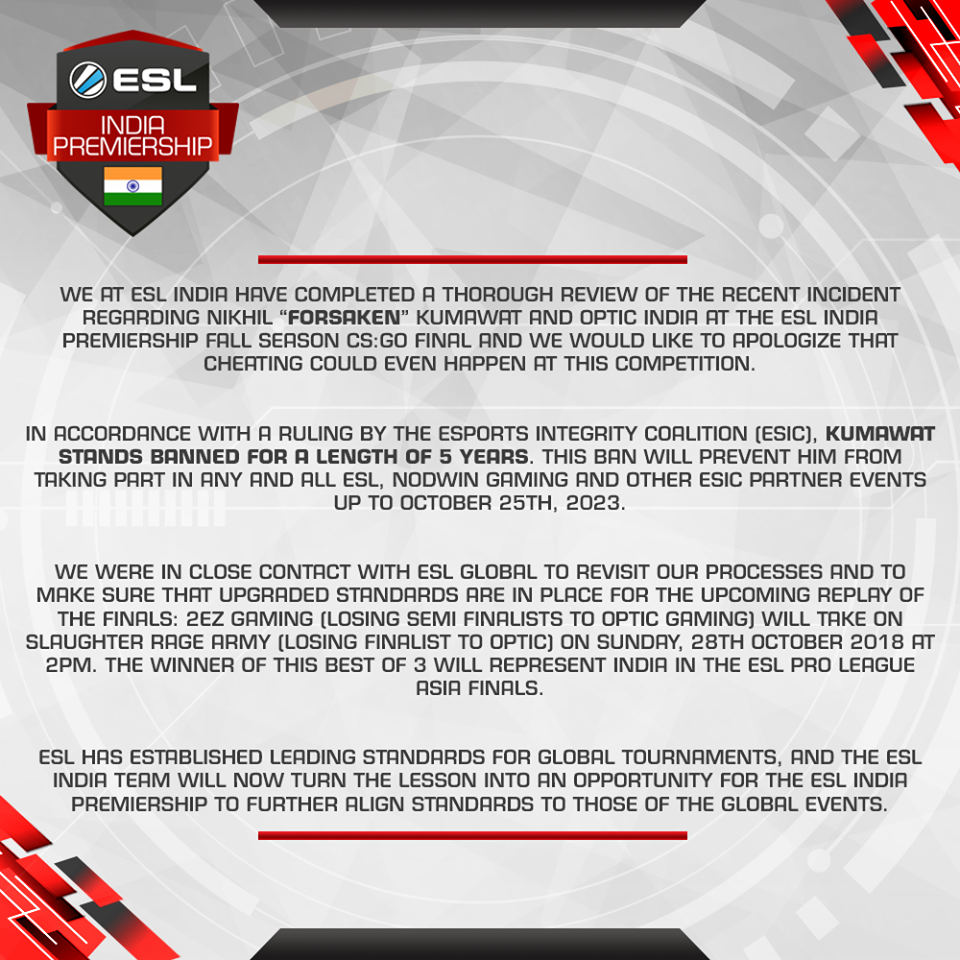 The organizers of the ESL Premiership have also made the decision to host the Grand Final again in order to decide the true winner of the tournament and the qualification spot for the ESL Pro League Season 8 Asia playoffs.

“We were in close contact with ESL Global to revisit our processes and to make sure that upgraded standards are in place for the upcoming replay of the finals: 2ez Gaming (losing semi finalists to OpTic Gaming) will take on Slaughter Rage Army (losing finalists to OpTic),” they explained. “The winner of the best of 3 will represent India in the ESL Pro League Asia Finals.”

According to a report from HLTV.org, the teams will be playing the match from internet cafes under the watchful eye of ESL India admins.

“ESL has established leading standards for global tournaments, and the ESL India team will now turn the lesson into an opportunity for the ESL India Premiership to further align standards to those of the global events,” they concluded.