Day one upsets make for tasty second round matchups at the FACEIT London CS:GO Major

Day two of the New Legends Stage has thrown up some extremely interesting contests following some massive upsets on day one.

All eyes will be on the losers side of the New Legends Stage, as some of the best CounterStrike: Global Offensive teams in the world already find themselves with a 0-1 record, and in desperate need of a win.

Among those is FaZe Clan, a team who many people had high hopes for heading into the Major, due to the return of olofmeister. Their tournament got off to a disappointing start, as they were soundly beaten by BIG Clan 16-5 on Dust II. They take on fellow CS:GO heavyweights Natus Vincere, who fell to Astralis in a tightly contested affair. 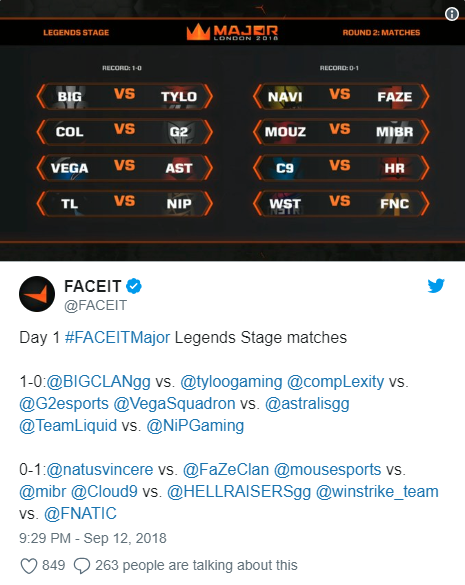 Fnatic, who were surprisingly demolished by compLexity, take on Winstrike Team in a match that has more than just tournament ramifications on the line. Draken took to Twitter to state that if his Fnatic squad failed to beat Winstrike, he would eat a shoe, so look to see him come out hot as he attempts to avoid his self inflicted punishment.

MIBR also find themselves winless heading into day two of the New Legends Stage, falling to TyLoo, and will need to bounce back against Mousesports as they attempt to get their Major aspirations back on track.

In the winners side of the Swiss format, surprise stage leaders compLexity face another tough challenge in the form of G2 Esports. The #1 ranked team in the world Astralis take on the talented Vega Squadron, while BIG Clan have already continued their impressive display by winning the first game of the day against TyLoo.

A full list of the day two matchups, along with their estimated start times, can be found below. Matches started at 10am BST (5am EDT, 2am PDT, 7pm AEST) on an accelerated schedule.