Update, 8:47 PM EST, September 16: The Santa Monica Police Department has announced there is “no threat to the public” after their investigation, and confirmed the area is planned to be reopened before 10pm.

The Counter-Strike ECS NA Qualifiers stream was put on hold after the FACEIT production crew were forced to evacuate their building following a potential bomb threat located by the Santa Monica Police Department.

Team Liquid and eUnited were preparing to play their 19th round when the FACEIT casters were given the news that the police were shutting down the street outside their studio due to a “suspicious package”. Minutes later, the September 16 stream was temporarily paused. 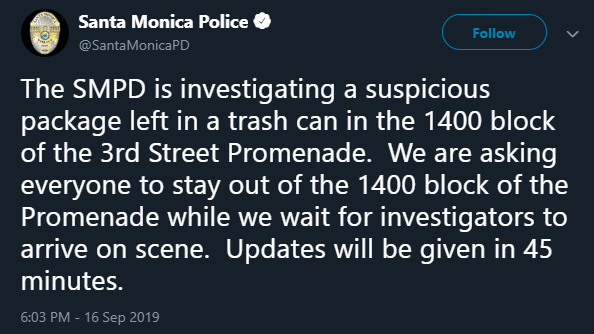 The tweet from the Santa Monica PD.
[ad name=”article2″]

FACEIT commentator James Bardolph was the first to update viewers, revealing on Twitch the casters were being told they were potentially going to have to exit their building due to the unknown nature of the package.

“So the police think there’s potentially a bomb outside, so our building might get evacuated, they’ve closed off the street outside. There’s a bomb squad on the way,” he said on-stream. “I’d be surprised if it was a bomb, but they might come and tell us to go away.”

Soon after the FACEIT production staff, which included Bardolph and a handful of other casters and observers, were asked to evacuate the building, leaving just the SMPD announcement live on the stream.

“So indeed we had to evacuate the building as there is potentially a bomb on the promenade immediately outside our office, fingers crossed nobody gets injured,” the caster confirmed on Twitter following the team leaving their studio.

So indeed we had to evacuate the building as there is potentially a bomb on the promenade immediately outside our office, fingers crossed nobody gets injured.

While FACEIT’s coverage of the match was delayed due to police removing people from nearby buildings, the contest continued off-stream. Team Liquid was victorious on Nuke 16-13, and claimed the series over eUnited 2-1.

Qualifiers observer Connor ‘Sliggy’ Blomfield also saw the humorous side of things despite the potential for a dangerous situation, using the moment for a personal announcement: “Well, now I have some unexpected free time. I can announce I’m observing this season of @ecs.”

Well now I have some unexpected free time. I can announce I’m observing this season of @ecs.

The FACEIT TV stream has now returned with live footage of the Cloud9 vs ex-Luminosity match, with the message: “Due to unforeseen circumstances ECS will be without commentary until the situation resolves.”

There has not been any further updates from the Santa Monica Police Department about the contents of the suspicious package, and the situation is believed to be ongoing. This story will be updated as more information is revealed.